After getting this much praise, most politicians would smile proudly and bask in the recognition. But Steven Chu, who had just flown in from Washington and was sitting in Building D at the conference center in Cancun, where the United Nations Climate Change Conference is currently being held, didn't move a muscle as his achievements were listed. He knows full well that he was recognized as a top researcher at Stanford and Berkeley, that he is a member of elite science academies in both the United States and China, and that he received the Nobel Prize in Physics in 1997 -- and he isn't interested in the things he already knows.

Chu, it turns out, isn't a normal politician but a man who has remained a scientist at heart. Speaking in Cancun on Monday, the 62-year-old US energy secretary only became animated when it was time for him to explain to his audience why the world is in danger, and what he wants to do about it.

His speech was titled "Building a Sustainable Energy Future." One year after the failed United Nations climate summit in Copenhagen, this sounds almost cynical. The United States bears much of the responsibility for the fact that a global plan for reducing greenhouse gas emissions did not materialize in Copenhagen. Now leaked diplomatic cables have also revealed that Washington, together with Beijing, made sure that the negotiations in Copenhagen would fail.

At the moment, there is no indication that the commitment to reduce CO2 emissions by 17 percent can be met. The United States is already responsible for the largest share of excess CO2 in the atmosphere, and the situation has only worsened since Copenhagen. Ironically, it was at the height of the oil spill in the Gulf of Mexico last summer that a climate protection bill failed in the US Senate. In the wake of their success in the November midterm elections, the Republicans now plan to destroy anything that sounds remotely like international climate protection measures.

That's why the United States has come under such sharp criticism from environmental organizations at the United Nations climate summit, which continues until Friday in Cancun, Mexico. Nevertheless, Chu remained cool and completely unemotional. "I'll make two predictions," he said. "First, the price of oil will get higher in the next few decades. Second, we will live in a carbon-constrained world," in which it won't be possible to emit carbon dioxide as easily as today. Then, he gave something like a physics lecture that was probably targeted more at climate change-denying Republicans at home in the United States than his audience of international climate experts in Cancun.

The energy secretary and Nobel laureate showed the audience temperature curves and gave a longish argument on why the additional carbon dioxide in the atmosphere must come from manmade rather than natural sources. He showed calculations indicating that sea levels are rising much faster than predicted by the Intergovernmental Panel on Climate Change (IPCC). And he talked about satellites that are measuring the melting of the Greenland ice sheet down to the last millimeter. "It has our fingerprints all over it," he said, describing the evidence that human activity is causing the warming to happen. "There is no real credible argument that I know that says that the Earth can not heat up over a 50-100-year time period."

In the worst case, Chu added, the process will only stop when the deep sea has warmed and a new equilibrium has been reached. "But we really don't want to live in a world like that," he said.

US President Barack Obama's appointment of Chu two years ago was greeted with great enthusiasm. Many were impressed by the wisdom of choosing a Nobel laureate as a secret weapon to wean America away from its oil addiction. But so far Chu hasn't managed to convert the nation. His scientific arguments and the prospect of a "green economy" fall on deaf ears among the Republicans, many of whom receive political contributions from the oil and coal industries. At the climate summit in Cancun, Obama and his climate negotiators are seen as putting on the brakes, rather than promoting progress. And nowadays ordinary US citizens are much more concerned with the economic crisis than with long-term climate change.

Has Obama's unconventional energy secretary already failed in his mission?

"We are spending $90 billion (€67 billion) on energy efficiency, renewable energy, underground CO2 disposal and smart grids" to transmit renewable electric power, Chu said in the second part of his speech. "We are tightening the emissions requirements for cars and promoting energy-efficient buildings." Chu's message was that, even if it doesn't seem that way on the surface, the United States is very actively reducing its CO2 emissions.

Representatives of several US states, including Illinois, New York and California, had made similar claims before him at the US pavilion in Cancun. They reported on their own reduction targets, their own emissions-trading schemes and their own subsidy programs for green technology, which, as they said, not even the new Republican majority in the House of Representatives could stop.

Chu has not fought back against Republican opposition to climate policy with hard-hitting political language of his own. Even after two years in office, the tough and dirty business of politics apparently remains foreign to him. Instead, the energy secretary is devoting all of his energy to what he was familiar with before moving to Washington: America's inventive and innovative spirit.

In his speech in Cancun, he mentioned the 17 Nobel prizes awarded to scientists working at the legendary Bell Labs. And he reminded his audience that the GPS navigation system and the Internet emerged from US government research programs. He now wants to see these successes repeated in the field of energy technology. He said that he is drawing on the Department of Energy's resources to build a large number of "Bell Lablets," where new discoveries will be transformed into marketable technologies. According to Chu, the US government subsidizes a huge number of projects, each for two years at a time, including genetically modified plants that cows can digest without emitting the potent greenhouse gas methane, and projects to make car batteries cheaper and last longer. "If they have nothing to show after two years, we stop funding," Chu said.

But what if science still comes up empty-handed and there is no magical technology solution for all of our problems? Will Americans be willing to drive less, eat less meat and consume fewer energy-intensive products from China in order to protect the world from dangerous climate change?

Laser-Sharp View of the World

Chu had no time to answer questions like these after his appearance at the climate summit. His plane back to Washington was already waiting. This meant that one of the questions that would go unanswered was how Chu, as a Nobel laureate, views the UN climate negotiations and whether he, as an American of Chinese descent, believes that China and the United States will ever agree on a joint climate protection strategy.

Chu received his Nobel prize for coming up with a way to cool atoms to record temperatures with the help of lasers, which makes it easier to study them. But Chu himself comes across as part of his experiment, taking a laser-sharp view of the world and cooling down the overheated climate debate to a point where nothing is left but factual arguments. If this is a political strategy that he expects to succeed, its results are yet to come. Mere facts have so far not been able to change political and personal attitudes towards energy waste and energy efficiency.

At the end of his talk, Chu displayed a spark of emotion after all. He showed his audience a photo of a black surface with a small dot along the edge: an image of the Earth, taken from the edge of our solar system. "That's home. That's us," he said, quoting famous astronomer Carl Sagan. "There is nowhere else."

Finally, he even quoted an old Native American saying, which states that the Earth was not given to us by our parents, but borrowed from our children. "Our generation better not break this trust", he said.

But not even that sentiment will cause the oil lobbyists back in Washington to shed any tears. 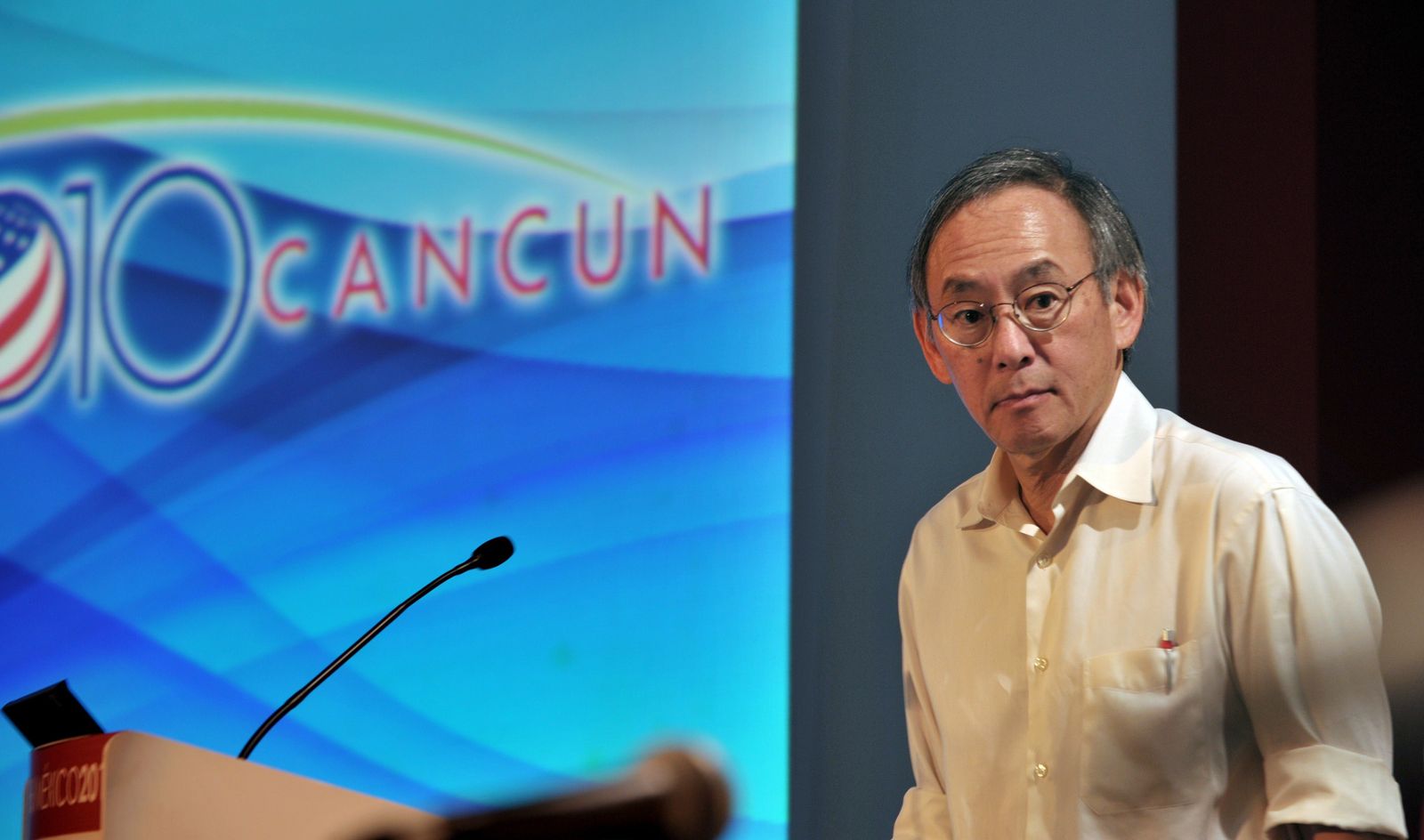 US Energy Secretary Steven Chu in Cancun: "We will live in a carbon-constrained world."