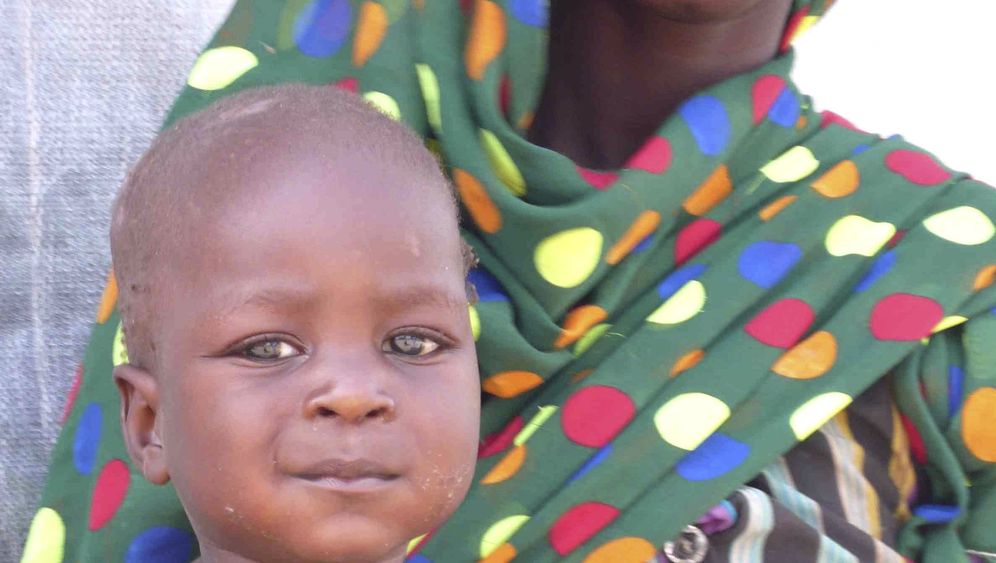 One minute per patient, and even that is a luxury. When Doctor Tom makes his rounds, his time is a valuable commodity. There's just enough of it to ask the patient a quick question, wipe clean a festering wound and make a quick note on the chart, then it's time to move on. Whether it's a forearm that's been torn off, grenade shrapnel in a patient's abdomen or a 15-year-old girl who fell into the fire while suffering an epileptic seizure, there's no other way, Doctor Tom has to do everything quickly. With 290 patients and one doctor, there's no time for sympathetic chats, and there are always more injuries to be treated.

"Welcome to Gidel," Doctor Tom says. Evening has arrived in South Kordofan and the air, blisteringly hot at midday, has cooled to 30 degrees Celsius (86 degrees Fahrenheit). Doctor Tom is back at the nearby Catholic mission, still wearing his green scrubs and still carrying the weight of trying to pull nearly 300 patients through. The only thing he's left behind at the hospital is his stethoscope.

Doctor Tom, 47, real name Thomas Catena, has metal-rimmed glasses, several days' worth of stubble and an ascetic build. He's an American and a devout Christian. Every morning, he hurries to the mission's chapel to pray. Catena was previously a military doctor and has also worked in Nairobi's slums and at hospitals in Kenya. He knows the very worst sides of Africa -- which is why he stayed here in Gidel when the Sudanese government sealed the borders around the province of South Kordofan about 10 months ago, when the first bombs fell and everyone else left, the NGOs, the director of the hospital, even the anesthetic assistant.

But even as they departed, increasing numbers of patients arrived. They came because bombs kept falling, because Doctor Tom was there and because aside from a small outpost run by Cap Anamur, a German medical aid organization, Gidel has the only hospital within a radius of around 150 kilometers (90 miles). "This is a textbook example of a civil war," Doctor Tom says, sipping his water.

No one knows Gidel, a dusty little place, and hardly anyone knows South Kordofan or the Nuba Mountains. South Kordofan, nearly twice as large as Austria, forms a sort of buffer state, its territory belonging to Sudan but directly bordering South Sudan, an independent country since last July.

It's a fertile region, rich in minerals -- and oil. And perhaps there would be no reason to know about South Kordofan if it weren't currently the site of a drama similar to the one unfolding in Syria: a dictator, an undeclared war, a population taken hostage, bombs and grenades that target primarily civilians. But there are no bloggers in the Nuba Mountains, no YouTube videos, no media-savvy rebels. This war is taking place largely away from the world's eyes. A recent protest in Washington, at which Hollywood star George Clooney was briefly arrested, did little to change the situation.

The conflict began in June of 2011, just days after elections for governor in South Kordofan. The governor appointed by the national government in Khartoum, Ahmed Haroun, supposedly won. Haroun is wanted by the International Criminal Court for suspected war crimes.

But no one believed Haroun's victory, and there was talk of massive electoral fraud. The indisputable leader of the Nuba region is Abdul Aziz, an experienced rebel who fought with the SPLA-North, the Nuba branch of the Sudan People's Liberation Army (SPLA), in the civil war against the North.

When Aziz's people refused after the contested election to lay down their weapons and integrate themselves into Khartoum's army, President Omar al-Bashir banned aid organizations from the region and sent in tanks and planes instead.

'Now They're Paying For It'

There has been war in South Kordofan ever since, fueled no doubt by the fact that South Kordofan sits astride three significant dividing lines: The region marks the divide between Christianity and Islam, as well as between Arabs and Black Africans. And, since last year, it also divides the countries of South Sudan and Sudan.

"People in Nuba fought on the side of the South, and now they're paying for it," says Bishop Macram Gassis. Seventy-three years old and not in the best of health, the bishop is nonetheless perfectly alert. He fled to Nairobi, Kenya, because his poor health renders the grueling and dangerous trip overland to Gidel impossible. In the past, he would fly from Kenya to South Kordofan, but commercial planes are grounded now that Antonov bombers from Khartoum control the region's airspace.

Bishop Gassis oversees the diocese where people are now being shot and killed.

Gassis has never made a secret of his animosity toward al-Bashir, particularly since Gassis himself grew up in Khartoum and went to university there. Eventually the bishop was no longer tolerated in the country, and went abroad. Christians make up only a small minority in the Nuba Mountains, but are accepted by the Muslim majority there, perhaps partly because their projects -- including the hospital in Gidel, schools, and a radio station -- have brought a bit of progress to this remote, mountainous region.

Al-Bashir's government, on the other hand, has always neglected the development of the Nuba Mountains. There are no roads, hardly any schools, no healthcare. None of the income from the region's gushing oil reserves ever makes it back to South Kordofan, because people in the Nuba Mountains aren't proper Arabs, because they eat pork and sometimes drink alcohol, and because they demonstrated sympathy for South Sudan's autonomy.

'Either Operate Yourself -- Or Let Them Die'

"To Khartoum's Muslims, they're second-class," says Bishop Gassis. And at some point, they were no longer willing to be neglected.

Now al-Bashir is waging war against them. The president's preferred method is to operate from the air, with bombs designed to fragment on impact. The result of that tactic is easy to see at the hospital in Gidel. Despite Tom Catena being the only doctor there, it is considered the best equipped in all of South Kordofan. And it's hopelessly overcrowded.

Mutassir Amdaraman is one person who owes his life to Doctor Tom. A lively child, just 14 months old, Mutassir is once again laughing, babbling and toddling about. The only thing missing is his right arm.

It happened in early January in the village of Ongolo. "They heard the Antonovs coming," explains his grandmother Samir. "My daughter was carrying Mutassir. They were trying to run down to the river, but they didn't make it."

The bombers were faster. Eight people died, including Mutassir's mother. The child's upper arm was shredded by shrapnel. When he arrived in Gidel after a two-hour drive, all that was left of his arm was a scrap of flesh hanging from his shoulder. Now his grandmother Samir, herself just 32 years old, is taking care of the child.

This is all part of everyday life for Tom Catena. The doctor operated on over 1,500 patients in 2011. "You don't have the option of transferring them to a better hospital," he says. "You only have the choice of doing it yourself -- or letting them die."

Many thousands of people have fled south from the Nuba region. There are 30,000 refugees stranded just in the dusty border town of Yida, between Sudan and South Sudan. Others have retreated to the mountains, where they seek shelter from the bombs in caves or under rock ledges.

Politically, the situation is at a standstill. Geographically and according to the 1956 borders drawn by the British that still form the basis for the north-south divide, South Kordofan belongs to the North. But Khartoum has never valued the Nuba region's residents. For centuries, the Arabs used them as slaves, and made no investments in the region. The area served as a buffer between North and South in a civil war that dragged on for 23 years.

Then came the 2005 Comprehensive Peace Agreement (CPA) between North and South, and a serious political lapse. The two sides couldn't agree on what to do with the contested provinces of South Kordofan and Blue Nile. Both provinces had fought on the side of the South in the civil war, but both belonged geographically to the North's territory.

John Garang, the South's rebel leader who later died in a helicopter crash, didn't want the issue to ruin South Sudan's chance at independence. South Kordofan and Blue Nile were left out of the peace accord, with a vague agreement that the matter would be decided by a "popular consultation," or referendum, in both provinces.

That referendum never took place, and for good reason from al-Bashir's perspective. In Gidel, for example, the majority opinion would be clear.

The town's administrative secretary shows up on his motorbike. Kuku Barnabas, 35, hasn't received a salary in months. His pay, of course, used to come from Khartoum, and nothing comes from Khartoum anymore, no pay, no gasoline, no medicine, nothing. And yet Barnabas wouldn't return to the old days. "They faked the election," he says. "They know all the things they can get from the Nuba Mountains: oil, gold, charcoal. And they knew they would lose all of that if they lost the election."

What does Barnabas see as a solution? "We belong to the South," he says. "The North wants to Islamize us. It will never work out with them."

It does seem as if a permanent break has been made. Major General Izak Kuku, 50, and his troops have dug in along the road from Gidel to Yida. Under the scrubby branches of acacia trees, the soldiers have set up tents, pick-up trucks and tankers, forming a camp that's barely visible from the air. Every person here carries a Kalashnikov, even the cook's assistant, and ammunition crates serve as benches.

Kuku himself is in plainclothes -- he's about to go out, and doesn't want to be recognized on the road as a general. He apologizes for the makeshift arrangements. "We're guerrillas," he says. "Our office is still under construction." Kuku has fought against Khartoum since 1985, 20 of those years as part of the civil war.

He comes to the point: "The Arabs simply don't want us here. They only want our resources, the oil, the gold, the minerals -- and they'd like us to just disappear." Kuku isn't interested in annexation to South Sudan, he says, "but it won't work with al-Bashir either." He describes how once before, in 1992, Misseriya Arabs incited by Khartoum killed hundreds of Black Nuba residents.

Now, Kuku is optimistic. Two thirds of South Kordofan is in rebel hands, he says. But the real problem is still on the horizon. With so many bomb attacks, he explains, farmers were not really able to do their planting, and only sometimes able to harvest their crops. "There will be hunger," the general says.

Barnabas, the young administrative secretary in Gidel, has the same worry. But before he swings himself back onto his motorcycle, he asks the question that's on everyone's mind in the Nuba Mountains, one for which there is no conclusive answer.

Barnabas talks himself into a rage, and nearly shouts his question: "Why isn't the world helping us? Why did they spend six months intervening against Gadhafi in Libya -- and why not in South Kordofan?"