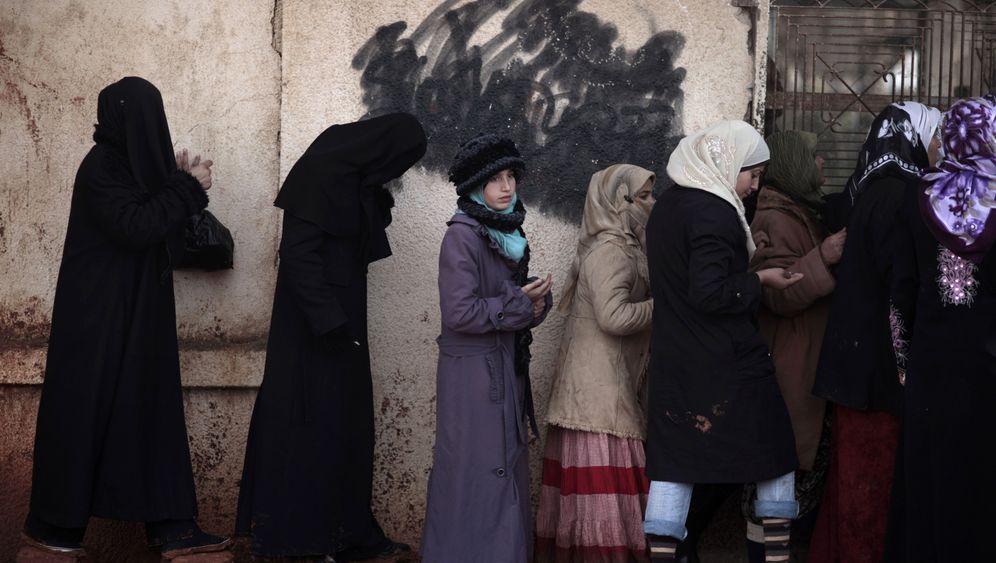 It's a sector that ought to be booming. Businessman Wissam* works in hospital supplies. He sells bandages, needles and disinfectants -- all products for which there is a great need in the increasingly bloody Syrian civil war. But unfortunately, Wissam has little opportunity to sell his wares.

"More than 50 percent of the Syrian healthcare system's infrastructure has been destroyed," says the man in his mid 40s. Of the 75 state-run hospitals, just 30 remain in operation. In the embattled city of Homs, just one of 20 hospitals remains open. The Al-Kindi Hospital in Aleppo, once the largest and most modern medical facility in the country, is now a pile of ash.

Wissam is matter-of-fact about the situation. The destruction of the hospitals is widespread, he says, and those who are injured or sick receive hardly any medical care. The business is "dying a slow death," he adds.

While the world debates what its reaction should be to what was likely a chemical weapons attack in Syria last week, and the United States positions its destroyers off the country's coast, much of the focus has been on the humanitarian crisis caused by two-and-a-half years of war. But the fighting has also crippled Syria's economy, which could potentially be a factor in ending the turmoil.

For this reason, facts and figures about the economic impact of the war are state secrets. There are, however, indications of how precarious the situation may be, and these reflect what Wissam says about the collapse of the health sector.

Experts estimate that some 75 percent of the production facilities in Aleppo, Syria's commercial capital, are no longer operating. Some of the factories were bombed, while others burned down or have been taken over as rebel strongholds. Others can't even be reached due to the precarious security situation in the surrounding area.

Transport difficulties have hit the agricultural sector too. Farmers have been unable to till their fields or sell their crops. Food is becoming scarce and increasingly expensive. The Syrian people are suffering, and their rage and desperation are growing. In response, President Bashar Assad's regime in Damascus is importing grain, rice and sugar.

The economic sanctions imposed by the European Union and others have also hit Syria hard. The country used to sell some 95 percent of the oil it produced to Europe. That demand has now collapsed. Only a handful of countries now buy Syria's oil, and at significantly reduced prices.

Countries including Iran, China and Russia are supporting the currency, according to Deputy Economy Minister Kadri Jamil, but that hasn't stopped the Syrian pound from depreciating by around a third.

According to Reuters, the regime has been trying to access funds held in accounts abroad that were frozen as a result of sanctions. That could be a sign of desperation.

Before the civil war, Syria's foreign currency reserves had been estimated at some €13.5 billion ($18.1 billion). But it's unclear if that money is running out. Rumors suggest the regime has access to secret reserves amounting to billions. According to Jamil, Tehran has granted Damascus unlimited credit for food and oil products.

The regime also appears to be saving on expenditures. Assad's government has one to two million public employees whose salaries have become cheaper to pay. That's because oil is traditionally paid for in dollars, and the depreciation of the Syrian pound means the government can sell less oil to obtain the same pound-denominated revenues.

The government is also saving part of its usual subsidy outlays. Before the war, Damascus spent some €6 billion per year on subsidizing goods like cooking gas, fuel and electricity to make them cheaper to buy. That sum is likely to have dropped sharply because hardly any of those products are being supplied to areas that are controlled or made inaccessible by the rebels.

Syrian businesspeople don't think the sanctions will speed up the end of the war. "In Iraq, sanctions destroyed economic life for 13 years," says Wissam. "But Saddam Hussein managed to stay in power. We're not even halfway through this war."

Criminals are the profiteers of this economic erosion. A black market economy has grown in territories controlled by the opposition. "Regime officers take bribes for protecting certain city districts or villages," said Wissam. Networks of smugglers are getting rich from selling groceries, fuel and food, he added.

*Name changed at the source's request.