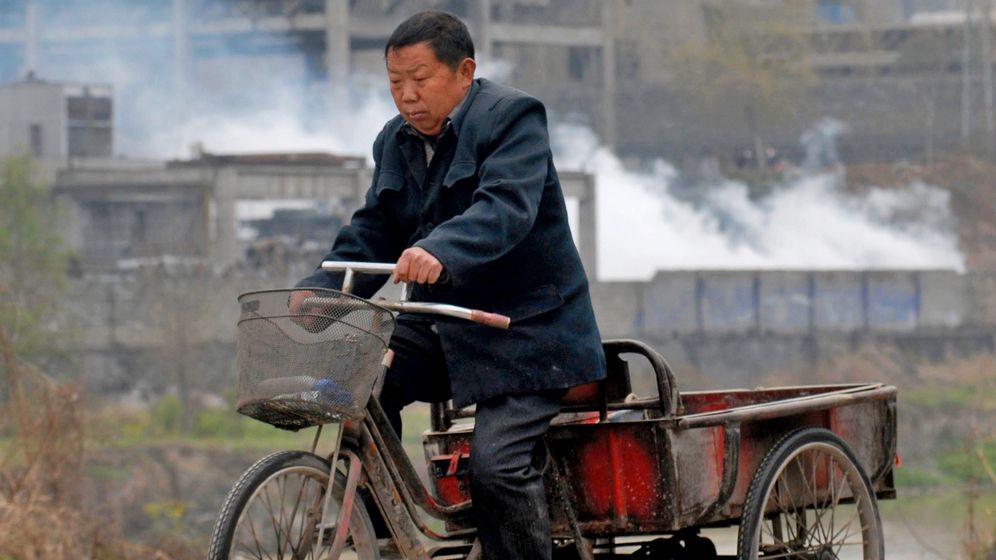 A climate catastrophe descended on the German Foreign Ministry in Berlin early last week. Politicians and diplomats from around the world were attending a conference to discuss how global warming will affect the world. They examined scenarios depicting how millions of people living in coastal areas could escape flooding, what will happen to the fishing and mineral rights of island nations when they no longer exist and how China and Russia will benefit from an ice-free Arctic.

In a statement, the Foreign Ministry said that it intended to "openly and creatively address" the dangers of climate change. The exercise was designed to help "find new paths of international cooperation."

But the belief that global warming can be halted through international cooperation is elusive. The Kyoto Protocol, the world's only binding climate agreement, will soon expire. The most important means to date of compelling industrialized nations to reduce their greenhouse gas emissions seems likely to become a mere footnote in history.

The current CO2-reduction agreements expire at the end of 2012, and there is enormous resistance to new targets. The environment ministers and negotiators from roughly 200 countries, who will travel to Durban, South Africa at the end of November for the latest global climate conference, are a long way from breathing new life into the Kyoto process.

Christiana Figueres, the executive secretary of the UN Framework Convention on Climate Change, is making the bold claim that there is "a strong desire from all sides to see a final political decision made" in Durban. But this decision will probably consist of doing without fixed agreements on CO2 reduction in the future. "The meeting in Durban could become an act of mourning," warns Reimund Schwarze of the Climate Service Center in Hamburg, which analyzes climate policy on behalf of the German government.

When Angela Merkel, then the German Environment Minister, returned from the 1997 UN climate summit in the Japanese imperial city of Kyoto, she was exhausted after long nights of negotiations. But she was also proud. The industrialized nations had pledged to reduce their greenhouse gas emissions for the period from 2008 to 2012 by 5 percent from the 1990 levels. The conference was a "milestone in the history of environmental protection," she said, noting that an "irreversible process" to reduce the emissions of greenhouse gases had been initiated.

Although the industrialized countries will achieve the goal set in 1997, Merkel, now Germany's chancellor, has lost almost all the optimism she had at the time. In fact, she now warns that the international negotiations could turn into a "huge disappointment."

To stop global warming, a much faster and greater reduction in CO2 levels would be needed than the Kyoto Protocol has produced to date. But this is nowhere in sight. The reductions in emissions so far are primarily the result of economic crises and the collapse of industry in the former Soviet bloc. Noble rhetoric aside, oil, natural gas and coal have remained the foundation of modern prosperity. Major industrialized nations like Australia and Canada have even increased their emissions.

Little has remained of Merkel's "irreversible process" to protect the climate. In emerging economies like China, which produces consumer goods for the world market, emissions have risen to such a great extent that they now far exceed those of the United States and Europe. Despite the economic crisis, worldwide CO2 emissions resulting from energy consumption reached a new record high of 33 billion tons last year, a 45 percent increase over the 1990 level.

Clean Energy as a 'Dirty Word'

The Kyoto Protocol was never ratified in the United States, and the country remains unwilling to submit to international commitments on energy consumption out of a concern that doing so could cost jobs. "Clean energy has become a dirty word in the United States," a close advisor to US President Barack Obama said during a recent visit to Berlin.

And now other important countries, like Japan, Canada and Russia, are refusing to commit to new binding CO2 targets for the period after 2012, as long as India and China do not cooperate. The emerging powers are calling for decisive action by the industrialized nations before they are willing to do anything, creating a vicious cycle.

"Without new reduction targets, Kyoto is nothing but an empty shell," says environmental economist Schwarze.

In times of financial crisis, many politicians apparently no longer attach very much importance to a threat that will only unleash its full fury after many years. In addition, mistakes and slip-ups have harmed the credibility of climate scientists. In particular, an incorrect prediction about the melting of Himalayan glaciers by the Intergovernmental Panel on Climate Change (IPCC) has given opponents of climate protection new ammunition.

The Europeans are the only ones still fighting for new binding targets within the framework of the Kyoto Protocol. Last week, EU Climate Commissioner Connie Hedegaard and environment ministers from the 27 EU member states agreed to campaign for more negotiations in Durban, but with a transitional period lasting until 2015, even though the CO2 reduction targets are set to expire in 2012. It is an attempt to buy time and to keep the Kyoto Protocol artificially alive, even though it's already clinically dead.

The malaise began in 2009, if not earlier. At the UN climate conference in Copenhagen, the Europeans, most notably German Chancellor Merkel, failed in their attempt to achieve a comprehensive climate treaty. The United States and three emerging powers, China, India and Brazil, aligned themselves against Europe in Copenhagen and blocked binding targets. None of them were willing to allow foreign countries to tell them how much fossil fuel they could burn in their factories, cars and buildings.

On the surface, the German government is fighting for a new agreement and regularly brings together decision-makers from around the world to save what can still be saved. But preparations to withdraw from the protocol have been underway for some time. Privately, no German negotiator still believes that the Kyoto Protocol can still be saved.

"At best, the EU can go it alone, but it represents only 15 percent of worldwide emissions," says a leading government climate strategist. The "only result would be that after Durban, 27 European parliaments would have to ratify CO2 targets that we already pursue in the EU."

Since the Copenhagen summit, the practical alternative to the binding climate treaty is to maintain an informal list. Each country voluntarily enters its national climate protection goals into this document. There likely would be some sort of mechanism to monitor compliance with these goals. But there would be no consequences whatsoever for countries that fail to meet their own targets. Given this half-hearted approach, it is likely that in the coming decades global warming will exceed the 2 degrees Celsius defined by the UN as the threshold to a dangerously overheated world.

There is no plan in place to prevent this from happening. Instead, in late November the diplomats in Durban will concentrate on programs that might be, at best, minor details of a major treaty, such as a "Green Climate Fund" designed to channel billions of euros from wealthy to poor countries to fund environmentally friendly economic development there. Other projects will involve creating financial incentives to protect intact forests.

UN climate chief Figueres admits that all of this is far from sufficient to avoid a dangerous warming of the planet. "The sum total of current national pledges to reduce global emissions falls 40 percent short of keeping below 2 degrees Celsius and that gap will have to be filled in the future," she says.

Jochem Marotzke, director of the Max Planck Institute for Meteorology in Hamburg and chairman of the German Climate Consortium, believes that global climate policy has reached a low point and that both politicians and the public are losing interest in climate issues. "But we can't negotiate against the climate," Marotzke warns.

"Scientists are more and more convinced of their results, but citizens are becoming increasingly saturated," says climatologist Hans von Storch, director of the Institute for Coastal Research in Geesthacht near Hamburg. According to Storch, public concern over climate change has declined for the fourth year in a row. He also sees the apathy as a consequence of the increasingly shrill, alarmist tones with which environmentalists and even a few scientists have attracted attention to themselves in recent years.

This did not stop the German Foreign Ministry from simulating scenarios of unchecked climate change last week. Minister of State Cornelia Pieper's comments in the presence of the environment ministers from Bangladesh and the Maldives sounded almost like capitulation. She noted that we must prepare ourselves to manage in a world "that will be scarred by global warming and other climate changes."