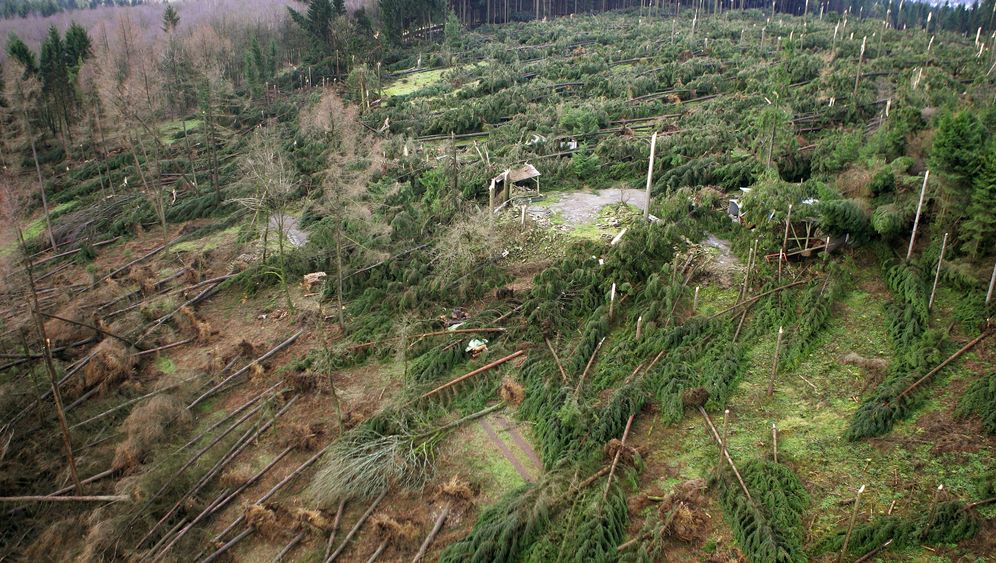 Storms -- and especially hurricanes, typhoons and cyclones -- are the most interesting weather systems for people dedicated to preventing climate change. Satellite photographs of these swirling storms are seen as a symbol of a world growing progressively warmer -- and of the considerable dangers that lurk in such a world.

The storm of the century, Hurricane Katrina, was seen as a warning sign, a harbinger of disasters to come. But six hurricane seasons have passed since then, and not a single massive, high-category storm has arrived to devastate the coasts of the United States. "Meteorologists last recorded such a calm phase between 1911 and 1914," explains Roger Pielke, Jr., a professor of environmental studies at the University of Colorado, in Boulder, who is working to reconstruct the climate history of the United States.

After years of combing through the data related to climate catastrophes, Pielke has concluded that: "Science cannot detect a clear trend. Some indicators even suggest that the number of hurricanes is more likely to decrease." Indeed, Pielke admits he's given up wondering why environments have ironically chosen hurricanes as their icons for climate change.

But, he adds, the public perceives something quite different. "Most of them say: 'Of course there are going to be more hurricanes; that's what you climate researchers told us,'" he says.

Weather-created disasters are once again in the spotlight. On Friday, Nov. 18, the UN's Intergovernmental Panel on Climate Change (IPCC) published a special report on extreme weather events, providing environmental activists a welcome opportunity to remind the public of past natural disasters and to call for increased climate-protection efforts. "But such events don't make good indicators of climate change," Pielke says.

Indeed, the fact is that researchers still can't really attribute such individual, extreme events to human influence. And, as frustrating as it might be for some people, closer inspection of the IPCC's new report reveals that such is its message, as well.

The report says that one "very likely" trend is that heat waves will occur more frequently and last longer around the world and that an increase in the frequency and magnitude of warm days and nights around the globe is "virtually certain." By the end of the century, the report predicts, temperatures on days with extreme heat will be between 2 and 5 degrees Celsius (3.5 and 9 degrees Fahrenheit) higher than they are today.

The report is more cautious in what is says about heavy rainfalls. "There is medium confidence," it says, "that, in some regions, increases in heavy precipitation will occur despite projected decreases of total precipitation in those regions." Recent studies even conclude that flooding has not become more frequent. There has also been a decrease in damage caused by rivers overflowing their banks, as sometimes occurs at the Oder River on the border between Germany and Poland, for example.

The IPCC report offers a picture of the future that is far from uniform. It is "likely" that heavy precipitation as a proportion of total rainfall will grow more frequent in many areas of the world in the 21st century, especially at high latitudes and in tropical regions. But, in other areas, the opposite is likely to be true.

In the United States, although the eastern and northeastern coastlines will receive more rain, the Midwest will grow drier. Monsoons in Asia could shift westward, bringing more precipitation to Pakistan, while southern China will have to contend with increased aridity.

Confusing, 'Watered Down' and Poorly Timed

One thing is certain: The IPCC's climatologists aren't offering politicians any simple truths to work with. Indeed, it might sound logical enough to assume that more heat means more water evaporating and thus more rain, but this assumption unfortunately bears no relation to real-life weather patterns. Temperatures have risen just under 1 degree Celsius over the last century, but "our measurements show no increase in precipitation," says Andreas Becker, the director of the Global Precipitation Climatology Centre (GPCC), operated by the German National Meteorological Service (DWD), based in Offenbach, near Frankfurt.

When asked whether this means that the IPCC climatologists have made a mistake in their measurements or whether their equations are wrong, Becker admits that it's "a major conundrum" for researchers.

Indeed, the new IPCC report has triggered sharp attacks from some climate activists for the way in which it underlines the very uncertainty of its predictions. For example, Climate Progress, a blog of the US-based think tank Think Progress, has criticized the report as being "watered down" and representing yet "another blown chance to explain the catastrophes coming if we keep doing nothing."

Fear of Exaggerating the Threats

Pielke, whose work has focused on the intersection between science and policy, sees the matter precisely the other way around and warns against allowing science to be roped into the service of climate-related politics. "The world is getting warmer, and we urgently need to do something about it," he says. "But we shouldn't use natural disasters as our argument for doing so." As an expert on such disasters, Pielke considers it a mistake to have released the report on the eve of the 2011 United Nations Climate Change Conference, which kicks off in Durban, South Africa, on Nov. 28. As he sees it, doing so "gives off the impression that we're trying to say something political."

All this leaves those hoping to save the climate facing a dilemma. On the one hand, there is a decreasing level of interest in the issue of climate change. Achim Steiner, the executive director of the United Nations Environment Program (UNEP), particularly blames the financial crisis for this decrease. "The financial crisis forces the political actors to take an unhealthy short-term view," he told SPIEGEL in a recent interview.

On the other hand, researchers such as Pielke fear that exaggerating the threats posed could backfire. "In doing so," he warns, "we risk losing our credibility." But that still leaves one question unanswered: How much uncertainty can his field afford to express before the public and politicians turn away?

Researchers invited to Germany's Environment Ministry on Tuesday had to navigate a fine line similar to the one that the 220 authors of the IPCC's special report did. The scientists were brought together to tell ministry officials their predictions for the weather events Germany might face, whether they involve storm surges, droughts or once-in-a-century rainfalls.

But there is little data and considerable uncertainty on these issues, as well. The only thing that can be said with some degree of certainty is that there will be more hot summer days and nights. Climatologists working with Michael Kunz at the Institute for Meteorology and Climate Research in the western German city of Karlsruhe have reconstructed temperature data as far back as 1755. This allowed them to calculate that the record summer of 2003 -- with its roughly 35,000 additional heat-related deaths -- was more than 2 degrees Celsius hotter than the previous record, reached in 1807. "We will experience a drastic increase in the number of hot days and the length of heat waves," Kunz predicts, adding that he wonders why so many people still buy penthouse apartments.

Kunz paints a different picture when it comes to winter storms. "Here, at mid-latitude locations, we're more likely to see a decrease," he says. Although temperatures will rise, he explains, the temperature extremes between cold and warm air that gives storms their force will diminish.

Still, although researchers predict there will be fewer storms, they believe the ones that do arrive will be more powerful. Wind speed could increase by about 10 percent, they say, which represents a significant change. "We've calculated that a winter storm 10 percent more powerful than Lothar would cause three times the damage," Kunz warns, referring to a storm in Dec. 1999 that caused severe damage in central Europe and left over 100 dead. He adds that winds beyond a certain speed start to blow roofing tiles off German houses, where they are often only loosely affixed.

Along the coasts, which are probably Germany's most climate-sensitive areas, levees are being monitored particularly closely since the IPCC has predicted that sea levels will rise by at least 20 to 80 centimeters (8 to 31 inches). "If the levees remain at their current height, the water will spill over more often simply because it will be that much closer to the top," explains Hans von Storch, director of the Helmholtz-Zentrum Geesthacht Center for Materials and Coastal Research, near Hamburg. He also predicts that future storms will be somewhat more intense.

Then there is the issue of rain amounts, which are notoriously difficult to predict. Andreas Becker, the DWD meteorologist who specializes in rain, believes there won't be any significant change in summer precipitation levels. Nevertheless, he predicts that the trend of winters bringing more rain and snow than they used to is likely to continue. "We will see an increase in heavy precipitation events similar to those that occur in summer," Becker says.

This effect is expected to be most extreme in the northwestern part of the country. Although an increase in heavy rains hasn't been observed there in the past 50 years, climate models show them becoming twice as frequent after 2040.

Still, Becker and his colleagues find it particularly difficult to answer the question of whether this means that German rivers -- such as the Elbe, the Rhine and the Oder -- will start to overflow their banks more often. To make such a prediction, they would need to know the regional distribution of heavy rainfall events since only rain that falls within the watershed of a particular river would increase the danger of that river's flooding.

"When we start trying to calculate changes in a particular region, we run up against the limits of the climate models," Becker says. Changes can be considerable in one area, he adds, and then minor just a short distance away.

Catastrophe researchers agree on one point: Good preparation can help reduce damage. Jörn Birkmann, an official at the United Nations University Institute for Environment and Human Society, in Bonn, was one of the lead authors of the IPCC's special report. He is proud that the committee addressed the question of how "to keep an extreme weather event from becoming a catastrophe for humans" in many of the report's chapters.

The researchers who gathered at the German Environment Ministry in Berlin on Tuesday had a similar focus. Wolf Dombrowsky, a sociologist at the Steinbeis University Berlin who specializes in catastrophes, said before the meeting that he planned to petition the government to take more pre-emptive measures regarding infrastructure elements, such as power lines, gas pipes and factory roofs. "In Germany," he says, "none of these are sufficiently secured against natural disasters."

When it comes to emergencies, Dombrowsky firmly believes that global warming shouldn't be cited as the only reason for improving civil-defense capabilities. "In the debate over greenhouse gases," he says, "we've forgotten that floods, storms and heat waves occur even without climate change."