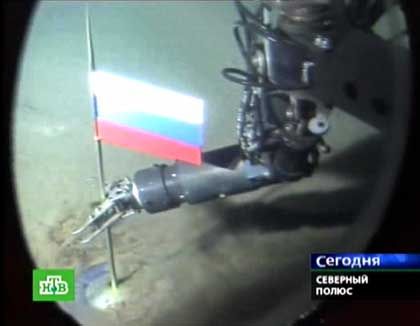 A robotic arm left a titanium Russian flag on the Arctic sea bottom last week. So far all claims to the North Pole by individual governments have just been stunts, though.

Canadian Prime Minister Stephen Harper is visiting the Arctic this week in the middle of a new -- and far from official -- race to claim the North Pole. Though the trip had been planned for months, his government wants to challenge an implicit claim by a Russian submarine mission last week.

"The Russians sent a submarine to drop a small flag at the bottom of the ocean," a Canadian government official, who preferred to remain anonymous, told the Associated Press. "We're sending our prime minister to reassert Canadian sovereignty."

Harper's government may soon announce specific plans to build a deep-water docking facility and military base in Canada's far north, in order to stake a claim on a region some believe contains rich oil and natural gas reserves. Though the North Pole is internationally administered territory, two Russian mini-subs made a brief mission on August 2 to explore geological formations under the polar ice pack with the intention of proving that roughly half of the region belongs to Russia. One sub planted a colorful titanium Russian flag on the Arctic ocean floor.

Canadian Foreign Minister Peter MacKay mocked the mission. "This isn't the 15th century," he said the same day on Canadian TV. "You can't go around the world and just plant flags and say, 'We're claiming this territory.'  We're not at all concerned about this mission -- basically it's just a show by Russia."

This week, the Canadian Broadcasting Company reported that Ottawa plans to convert an abandoned mine at the northern tip of Baffin Island, in the Arctic Circle, to a naval station. Military planning documents obtained by the CBC also suggested that Canada planned to build an army base on the shores of the so-called Northwest Passage, an international sea route.

Warmer temperatures in the Arctic have loosened ice in the Northwest Passage and made the North Pole generally more accessible. Five countries -- Canada, Russia, the United States, Norway and Denmark -- have competing claims to the region.

Russia argues that an undersea Arctic formation called the Lomonosov Ridge, which runs between Greenland and Siberia and underneath the geographic North Pole, belongs to its continental shelf, geologically, and therefore counts as Russian territory -- a claim unsurprisingly disputed by Denmark and Canada.

On Thursday, Denmark announced the start of a month-long expedition leaving Sunday. Danish scientists will travel to the Arctic to look for evidence that the Lomonosov Ridge actually belongs to the Danish territory of Greenland.

"There are things suggesting that Denmark could be given the North Pole," said Helge Sander, Denmark's science minister, on Thursday.

"Canada is open to being used as a maritime navigable way," a former commander of the Canadian Forces in the North, Pierre Leblanc, told the Financial Times, "but we want to control what goes on there. We are claiming this as internal waters. To be able to control it you have to know what's going on, and right now we don't."

The Canadian press, meanwhile, is doing what it can to buck up its government's claim. The CanWest News Service pointed out this week that Canadian explorer Jack MacKenzie unfurled a flag for the Canadian postal service at the North Pole in 1999.

"There was an understanding," wrote the news service, "backed by a letter from the then-president of Canada Post ... that the voyage would set up a postal outlet for Santa Claus."