Nancy Lanza loved her yard -- and her weapons. "Guns were her hobby," Lanza's landscaper Dan Holmes told the Washington Post. "She told me she liked the single-mindedness of shooting."

The 52-year-old was well-known in the community of Newtown, Connecticut. She was a regular at the local bar My Place and attended "ladies nights" to play dice with friends. But she only seldomly spoke of her quiet 20-year-old son, whom she often brought along to the shooting range. She owned three guns -- two pistols and a high-powered semi-automatic rifle made by Bushmaster, a military favorite.

It was with her own weapons that Mrs. Lanza, the nice neighbor, became both the first victim of the massacre in Newtown on Friday and, in the most cynical sense, an unwitting accomplice of the perpetrator. This sad combination reflects the hopelessness of the new and senseless debate about the weapons craze in America.

According to the initial investigation, Lanza's son Adam shot her before he went to the Sandy Hook Elementary School with her Bushmaster AR-15 and killed another 26 people -- among them 20 small children -- before killing himself. On Saturday evening the coroner released the names of the victims. When Connecticut Governor Dannel Malloy informed the parents, some of them reportedly collapsed in grief.

America is mourning, weeping, and praying. People are speaking of fate, tragedy, and the devil. But this was no uncontrollable natural disaster that befell the US, as has so often happened in its past. It is once again the unavoidable result of a national culture that isn't just embraced by the easily dismissed fringe. It is also embraced by nice, harmless people like Mrs. Lanza, who had a military-grade assault rifle in her closet. 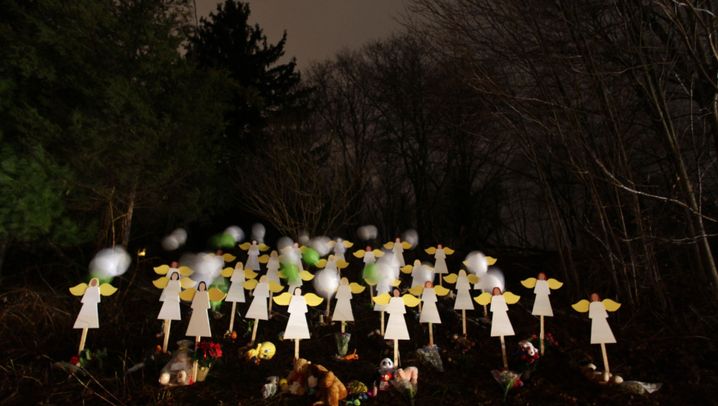 Once again, the United States is debating its gun laws, even if the discussion is likely to be short and inconclusive. But the real thing that must change (though it hardly will), is the misunderstanding that America's formative myth of "freedom" allows for weapons to be as widespread as smart phones.

"I came to realize that, in essence, this is the way we in America want things to be," writes Gregory Gibson, whose son Galen was killed in a 1992 shooting rampage, in a sad essay for The New York Times.

Why? Because guns have long been a part of America's national identity. This may have been appropriate in times when colonial powers, the frontier and the myth of the evil central state still threatened the people. Since then, however, it has become fatally counterproductive, regardless of the Second Amendment's guarantee of "the right to keep and bear arms."

Today the gun seems like a relic from an era that will soon have slipped away. But the faster it disintegrates, the more desperately people reach for the relic. That's likely what then Presidential candidate Barack Obama meant in 2008 when he described the existential fears of mainly white working class voters, who he said "cling to guns or religion or antipathy toward people who aren't like them, or anti-immigrant sentiment or anti-trade sentiment as a way to explain their frustrations."

It was an unfortunate, misunderstood formulation, though one that is still quite apt. America remains mired in a deep upheaval that has unsettled many. The "American Dream" of the country's former days is now just an empty catchphrase abused most prominently during election campaigns. The uneasiness felt by many was exposed by the recession that destroyed the illusion that prosperity was available to all. And it was revealed by Obama's re-election, the result of a new America in which the majority will soon be in the minority.

Self-assertion through armed force: This is the increasingly attractive fantasy adhered to by both sides -- both among perpetrators and among those who see themselves as potential victims. After every shooting rampage, a chorus of voices reliably invoke the argument that the crime may have been prevented had only everyone been allowed to carry a weapon.

No, not stricter, but more lenient laws would have prevented the Newtown massacre, Republicans say. It can mean the "difference between life and death for innocent bystanders," said the spokesperson for Michigan House of Representative speaker Jase Bolger regarding a law just passed in the state that would make carrying concealed weapons in schools easier.

The Fairy Tale of Self-Defense

Larry Pratt, head of the gun lobby Guns Owners of America even blames Connecticut's relatively strict weapons laws for the tragedy. "In addition to the gunman, blood is on the hands of members of Congress and the Connecticut legislators who voted to ban guns from all schools in Connecticut (and most other states)," he writes on the group's website. "They are the ones who made it illegal to defend oneself with a gun in a school when that is the only effective way of resisting a gunman."

This old fairy tale of self-defense is popular in the pro-gun lobby. It has also been statistically disproved. Civilians who shoot back usually miss. And those self-proclaimed defenders of law and order often hit the wrong target, such as Trayvon Martin in Florida. Or 17-year-old Jordan Davis, who was shot at a gas station recently because the music in his car was too loud.

The madness continues. The statistics, quoted often again since Friday, are well-known. America leads the world in shooting deaths, with some 30,000 people killed by guns each year. Yet each time there's a major shooting, weapons sales increase. In the days after the movie theater bloodbath in Denver this July, the number of background checks for guns in Colorado rose by 41 percent. After the 2011 shooting in Tucson, Arizona that left six dead and Congresswoman Gabby Giffords critically injured, weapons sales spiked by 60 percent.

The Power of the Gun Lobby

The belief in gun ownership is so deeply rooted that none of these dramas have sparked any real debate about the issue. On the contrary, public opinion tends to favor guns. Those who speak out for stricter gun laws, even those as successful as New York City Mayor Mike Bloomberg, are seen as spoilsports, outsiders and naysayers.

The choice of words in the debate also reveals its progression towards favoring gun ownership. New York Times statistician Nate Silver reports that the phrase "gun control" is being used less frequently in political discussion. Instead, the term is being increasingly replaced by the phrase "gun rights."

This is a clear victory for the gun lobbyist group the National Rifle Association. Along with smaller like-minded groups, the NRA invested some $3 million in the latest presidential and congressional election campaigns, more than they have since 2000. Some 96 percent of that money went to Republican candidates.

The NRA has single-handedly managed to politically exploit the nation's emotional state. This became most dramatically apparent in 1994, when Bill Clinton's signed the Brady Act, which required background checks for firearms purchases. The new law angered the Republicans so greatly that afterwards they mobilized to win a majority in the House of Representatives for the first time in half a century.

The Democrats haven't forgotten this lesson. According to The New York Times on Saturday, after the 2011 Arizona shooting, the US Justice Department created a detailed list of steps to strengthen weapons control. But these suggestions were quickly put on ice as the election campaign began in earnest.

Politics and emotions are an unbeatable combination. But will the Newtown massacre change this? People like New York Mayor Bloomberg hope so. Others like grieving father Gregory Gibson are skeptical. "We want our freedom, and we want our firearms, and if we have to endure the occasional school shooting, so be it," he writes. "A terrible shame …."