This man has just won an election. No, strike that -- this is not just any election. He has won the election. But Barack Obama isn't exulting over his victory the way one might expect of someone who has just been re-elected President of the United States of America. Where is the celebration of the successful campaign against Mitt Romney, the celebration of a hard-won victory? Now is apparently not the time.

In the early morning hours on Wednesday, addressing around 15,000 supporters in Chicago, Obama spoke words sure to stick in the minds of his listeners: "Our economy is recovering. A decade of war is ending. A long campaign is now over." The economic crisis, war and the election campaign -- this seems like a strange trio of elements to include in a victory speech.

But Obama knows all too well that he faces further battles. The country is deeply divided. Don't be fooled by the "winner takes all" American electoral system -- the fact is that Obama won by a narrow margin.

But in the moment of his victory, Obama had no choice but to extend his hand to his opponents. He had no other choice. The Republicans still control the House of Representatives, and power dynamics in Washington will continue to be difficult. There is danger of stalemate, deadlock and endless conflict. Obama's greatest task in his second term will not be reforming the country's tax code or fixing the immigration system -- issues he named in his acceptance speech -- but rather making a new start in Washington. Again. This is the same promise with which Obama approached the 2008 election.

Will he succeed this time? Ultimately it is the Republicans who will decide. This once proud and progressive party faces tough battles in the coming months over what direction it should take, and it is unclear who will prevail: the extreme right-wingers who seem determined to block everything, or the moderates who are willing to govern? The Grand Old Party, as members call it, is a deeply disturbing and disturbed political party. Finger-pointing within its ranks began even during election night.

But Obama, for his part, has made clear that he is prepared to follow the path of his hero Abraham Lincoln and take up the role of president as reconciler. Obama's speech called to mind words from the legendary address Lincoln gave in 1863 after the brutal Civil War battle at Gettysburg, a speech for which Obama has frequently expressed his admiration. "We here highly resolve that these dead shall not have died in vain," Lincoln declared, adding that instead their sacrifice should bring about "a new birth of freedom."

"We are an American family," Obama declared in his speech. "Whether you held an Obama sign or a Romney sign, you made your voice heard and you made a difference." In pursuing this reconciliatory approach, the president seemed to have in mind one politician in particular from the other side of the aisle: Governor Chris Christie of New Jersey, one of the states devastated by Hurricane Sandy. Speaking of his American ideal of non-partisanship, of national unity across party lines, Obama declared, "I've seen it on the shores of New Jersey and New York, where leaders from every party and level of government have swept aside their differences to help a community rebuild from the wreckage of a terrible storm."

Obama looked weary this election night, the look of a man pushed to exhaustion. An election can seem "small, even silly," he said. But, the president suggested, try talking to the people, the ones who fought at the grassroots level for the things they believe in. These people, Obama seemed to imply, are the good folks, these people are America. It seemed he was also trying to say: Sorry for all the muck we've been dumping on you for months, but there just wasn't any other way.

How, then, was Obama still able to win a second time? Can his victory be chalked up to mistakes on the part of opportunist Republican candidate Mitt Romney? Or was it Obama's crisis management in the wake of superstorm Sandy? Nate Silver, The New York Times' statistics guru known for rarely being wrong, caused a splash by announcing just ahead of the election that he put Obama's chances for re-election at 90.9 percent. Romney's advisors must have felt their blood run cold.

It won't be long before Obama has to prove himself for the first time after winning re-election. Deficit-reduction talks with Republicans are already scheduled for the coming weeks. They aim to prevent the automatic savings mechanisms prescribed by the Budget Control Act of 2011 from kicking in, decreasing the country's economic strength and most likely triggering a spike in unemployment. After that, it will be interesting to see whether Obama's new appointees can work well with Republicans -- a precondition for the success of reconciliation efforts. 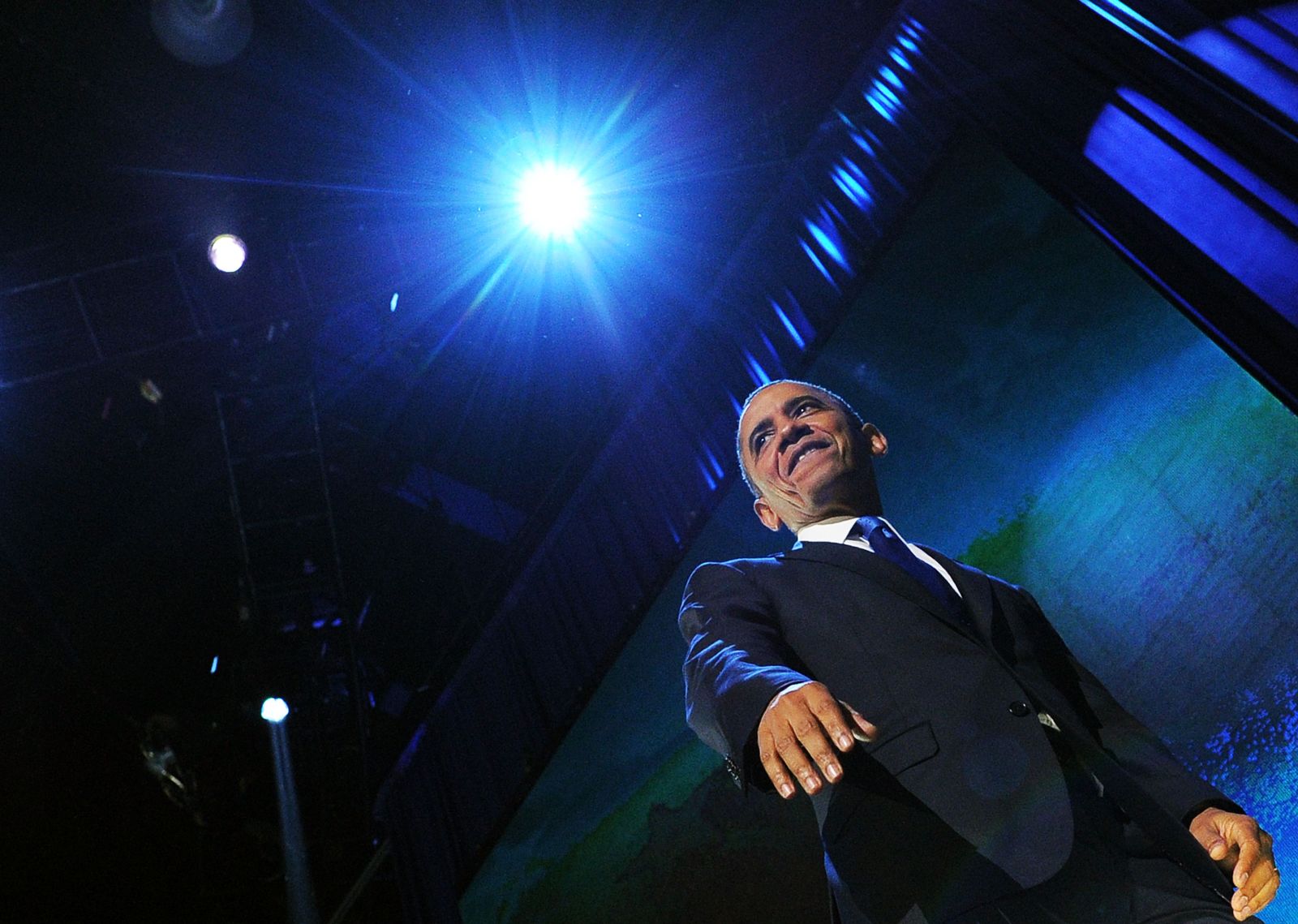 Obama smiles after delivering his victory speech on election night in Chicago.