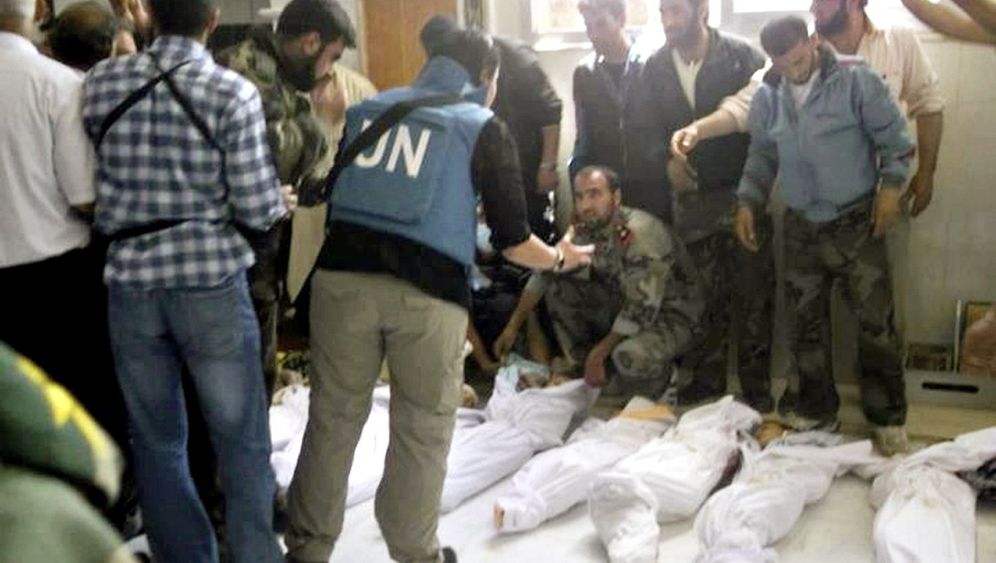 Officially, the killing in Syria should have ended more than six weeks ago. Bashar Assad, the president of an ancient country that has been half-destroyed within 15 months, was supposed to order the withdrawal of his troops on April 10 and, 48 hours later, begin a cease-fire with the rebels. He was required to do so under the six-point plan of United Nations special envoy Kofi Annan, who had given Assad an additional two-week grace period on March 27. The plan envisioned the immediate end of all hostilities and the pursuit of peace. It was still in effect when, on May 25, death squads committed a massacre in Houla, a town near the western Syrian city of Homs, that conjured up images of a hell on earth.

Hardly anyone at UN headquarters in New York had any doubt that Assad and his Shabiha militias were to blame for this massacre, and hardly any government in the world believes the Syrian regime's tall tale that "foreign forces" -- terrorists, al-Qaida -- were at work in Houla. It is now clear that Assad's clan does not want to give up power in the country, even if it entails killing its own people.

This raises many questions, which are easier to ask than to answer. Why isn't the world doing anything to stop the Syrian regime's rampage? Why are there no NATO fighter jets flying over Syria, as they did over Libya? Why aren't outside powers at least arming the rebels, so that they can defend themselves? And what good are the efforts of the United Nations Security Council if it always becomes hamstringed whenever it's time for the major powers to get down to business?

History is derived from stories, and whenever there is talk of old nations, everything is coated with a thick layer of legends and experiences. Syria looks back on more than 10,000 years of history. Entire books would have to be written to do justice to its history, but even then, a separate chapter would have to be devoted to a momentous, collective event that happened 30 years ago.

In February 1982, the regime of Hafez Assad, the father of current President Bashar Assad, was defending itself against the activities of the Muslim Brotherhood in the old city of Hama. Foreign observers were expelled from the country, starting with journalists, and then, on Feb. 2, the army advanced on Hama.

Air strikes and artillery fire destroyed large parts of the old city. People were carried off, tortured and murdered. Up to 30,000 people were reportedly killed in the government's effort to quash any hint of a rebellion, and to send the message to everyone that resistance was futile in Syria.

The exact circumstances of the Hama massacre are unclear to this day, but it is certainly not incorrect to say that it served as a brutal precedent to what is now happening in Syria. The Assad clan became more established in the ensuing years, and the Hama massacre became a model for the Syrian elite on how to treat its enemies.

Such clear models do not exist, however, on how to deal with ruthless regimes. The impression that the world has not tried to do anything to stop the violence in Syria is false. Even before last week's spectacular action in which Syrian ambassadors were expelled from a dozen major world capitals, the Arab League, the European Union, the UN Security Council, the UN General Assembly, UN Special Envoy Annan and, last but not least, UN Secretary General Ban Ki Moon were feverishly trying to stop the killing.

Russia Could Stop the Murderers

For months, there have been repeated attempts to introduce sharp resolutions and sanctions against Syria. Governments around the world, including the Arab world, have been united in their condemnation of the Assad regime's actions, but given the lack of success, some would argue that all of this was nothing but empty gesturing. Nevertheless, this is the only way that global politics can be pursued in a civilian and diplomatic manner, complete with declarations, draft statements and debates, because otherwise there would be nothing but war as the method of choice, and the rule of force would again prevail.

But Syria, unfortunately, is a case in point that the rule of force lives on, that it always returns and never disappears, and is simply deferred and used as needed by despotic regimes that care nothing about human rights and civility. Syria also teaches us that the people of the world, even in the 21st century, remain highly divided over questions relating to the rule of force, and that these questions could even give rise to a new East-West conflict. Even as Assad and his henchmen continue their current killing spree, much of the blame lies squarely with the governments of Russia and China.

Particularly the regime in Moscow (and referring to it as the Putin regime would not be incorrect) would have the power to stop the murderers in Damascus. Former ambassadors to the region are certain that Assad would fall immediately if Russia withdrew its support for him. Assad's victims are being killed with Russian weapons, Russian military equipment and Russian ammunition. And the freighters that bring the material to Syria are still sailing, and continued to sail after the Houla massacre, carrying Russia's disgrace on board.

Opinion pieces often point out that there are long-standing relations between Moscow and Damascus, but these relations are also based on very real interests today. Russia maintains its only naval base in the Mediterranean at the Syrian port of Tartus. The talk of the importance of an "ice-free" port for Russia may sound like a murmur from the distant days of the Cold War, but this interest, strategically pursued for decades in the Soviet era, remains extremely important for modern-day Russia.

It was no accident that the Russian navy conducted exercises in Syrian territorial waters this winter, nor was it an accident that the Admiral Kuznezov, an aircraft carrier, was cruising off the coast near Tartus. It was a classic show of military force, almost as if someone in the Kremlin had opened a series of secret drawers from the 1950s.

Moscow 'Fighting for Its Last Anchorage ' in the Middle East

For Russia, there is more at stake than this Mediterranean port. There is also more at stake than protecting a very good customer for Moscow's weapons or jointly developing a Syrian oil field. In the wake of the Arab spring, which led to the Russians losing a great deal of influence in the region, Moscow is "literally fighting for its last anchorage in the heart of the Middle East," says a UN ambassador from one of the member states on the Security Council.

A look at the map helps to illustrate Russia's concerns. Syria's neighbors are Israel, Jordan and Lebanon to the south, Iraq to the east and Turkey to the north. Syria is closely allied or at least deeply involved with all of these countries, whereas Russia cannot claim to be closely allied with any of them. Moreover, the region is, in a manner of speaking, the Balkans of the 21st century. If a fuse catches fire in the Middle East, no one knows what could end up exploding as a result. This circumstance, in addition to Russia's and China's special roles, explains the second obstacle to a "robust" intervention in Syria.

Conservative US politicians like former presidential candidate and Vietnam veteran John McCain are demanding "no-fly zones" in Syria. Last week, current Republican presidential candidate Mitt Romney, in a move designed to appeal to voters, said that the Syrian opposition should be armed. But both McCain and Romney, with their simplistic talk, seem as out of touch as the Russians who are behaving like their Soviet predecessors.

It is as if these two Americans had failed to notice that Syria's neighbor, Iraq, was the scene of a war that destroyed the reputation of the United States. In fact, the Iraq war did so much damage to Washington's standing in the region that it is no longer in a position to propose any solutions in the Middle East, and in fact has become part of the problem. Iran, Israel, Syria and Iraq are all countries where the United States has failed to get reasonable agreements off the ground, which used to be part of its role as the leading superpower. But this is just another dramatic insight stemming from events in Syria: Part of the legacy of the Iraq invasion, which was founded on lies, is that the United States no longer possesses the authority to act as a peacekeeping power in the Middle East.

US No Longer Has the Necessary Authority

This is why there will be no military intervention led by the UN, NATO or the West against the Syrian regime. And in this case, which differs markedly from the situation in Libya, it's a good thing. As understandable as the desire to bring murderers to justice is, and as distressing the images and reports and as upsetting the calls from help from Syria are, it's an insane idea to think that peace could be achieved in this bloody chaos by introducing even more weapons.

Those who believe that the rebels should be armed risk triggering an even greater calamity, a war of retribution waged by the Sunni majority against the military machine and the elites of the Alawite ruling circle. The Christians in the country would have to get involved, as would the Druze minority, and soon the Lebanese scenario of the 1980s would become a reality once again, complete with the horrors of Beirut and the eye-for-an-eye mentality that fueled the feuds between brutal militias in Lebanon. It would also be unlikely that this civil war would stop at the Syrian border. Lebanon would be sucked in to the violence, Jordan could quickly be affected, and NATO member Turkey would be forced to take action, if only to underscore its claim to the status of regional power.

Unfortunately, it is likely that this scenario will come to pass in any case, no matter what the rest of the world does about Syria. In fact, Assad seems to be giving his country the choice between only two options: deadly calm or civil war. There are already growing reports that Iran is sending armed troops to Syria, and that Saudi Arabia either aims to supply or has already supplied the opposition with weapons. It seems as if preparations were underway for a proxy war on Syrian soil. That would be the grimmest scenario for the civilian population, and a serious setback for the entire world.

The diplomatic efforts must continue, despite everything. Because of Russian and Chinese resistance, it hasn't even been possible to impose a comprehensive arms embargo against Syria. None of the many possible sanctions under Chapter VII of the UN Charter has been introduced, which is intolerable, given the repeated outbreaks of violence.

The key to a solution lies with Russia. It sounds like a statement from days gone by, and yet it is very applicable today. The government in Moscow has the power to stop Assad and possibly even prevent a civil war, and it must be forced, with all civilian means available, to exercise this power. It is intolerable that women and children are being massacred in the 21st century because of geopolitical thought patterns from the 19th century.

Last week Vladimir Putin traveled to Berlin and then Paris. It would have been a good starting point, and it would have sent a strong message, if his counterparts there had forced him to talk about Syria and nothing else, about the killings there and about ways to stop the violence. They didn't, of course. Syria was only one topic of many. Taking any other approach would have been too undiplomatic.