Take a moment to imagine it the other way around: A Syrian dictator with a full beard -- an Islamist harboring al-Qaida sympathies -- has the Christian population of his country shot, starved and bombed, lets fanatical militias massacre non-believers and burns the country down to ashes. Were that the case, an alliance of Western nations would step up to intervene faster than you could say "Mali."

Yet the people of Syria have been trying to rid themselves of a dictator for two years now. They spent months getting shot at while participating in peaceful demonstrations before they starting putting up violent resistance, and now they are facing a regime that intends to annihilate them. But it would seem that they're simply out of luck.

The reason isn't hard to see: Most of these rebels are Sunnis or, more broadly, Muslims. Many of them also have beards and shout "Allahu akbar" (as do the much smaller numbers of Ismailis, Druzes and Christians who fight alongside them). Sunnis also live in the areas that are being bombed almost daily when visibility is good.

Muslims rising up against their rulers to demand justice simply doesn't fit into our worldview. Over the past decades, this view has been fed on news of the Taliban, of radical Islamist clerics preaching messages of hate, of "honor" killings, of battles over a Danish cartoon and of the events of 9/11. Held responsible for the sum total of all we have heard over the years, Syria's Muslims are finding that the world views their struggle with suspicion and as just another attempt to establish a Muslim theocracy.

If they were Tibetans, you could be things would be different. But, as is, Bashar Assad's air force has been allowed to bomb with impunity. Scud missiles level entire city blocks, while Syria gradually empties out. Over 70,000 people have died in the conflict, and more than 1 million have fled the country.

From the start, Assad's regime has played on the West's fears expertly. It has denounced Syrian protestors as foreign jihadists -- while simultaneously releasing hundreds of al-Qaida supporters from prisons. It has faked attacks and worked to incite the country's various religious groups against one another, only to then turn around and present itself as a secular bulwark against radicalism.

And the regime's message finds willing ears in the West, where the fact that Assad bears primary responsibility for all this murder is dutifully mentioned. But, of course, the latter is only done as a prelude to enumerating, incident by incident, human rights abuses on the part of the rebels, in order to arrive at the conclusion that both sides in the conflict are terrible.

The West doesn't want to intervene. In Germany, both the government and the opposition have assumed the stance that, in addition to not providing the rebels with military aid, it should also stringently uphold the EU's arms embargo. Yet it's not as if the Syrian opposition has always been clamoring for weapons at all costs. Instead, asking for them is more of a last resort now that all its other appeals to the international community -- for everything from a military intervention to a no-fly zone -- have been turned down.

Despite a number of successes on the rebels' part, the regime's troops still hold the city centers of almost all major cities. They have also held on to enough airports to allow them to carry out strikes on the regions of the country that have been liberated, something they do continually. Assad no longer has anything to gain in this conflict, but there is still plenty he can destroy.

Very slowly, the West is coming around to a different perspective. The United States has been covertly providing aid since late fall, flying arms and ammunition into Turkey -- 3,500 tons' worth, according to the New York Times -- to be delivered from there to Syrian rebel groups. However, not many of those supplies seemed to have arrived by late January, when rebel commanders in northern Syria were still issuing their fighters individual, carefully counted rounds of ammunition. The rebels urgently need anti-aircraft missiles to defend themselves against air strikes, but Washington is holding back on supplying such weapons, afraid they might eventually fall into the wrong hands. Great Britain and France now want to supply the rebels with arms, but the EU embargo is still in place -- and Germany still supporting it.

How, then, can the inferno in this land that was once Syria be brought to an end? Supporters of the embargo come up with all sorts of declarations, all of which seem to employ the same verb: "Assad should resign!" "We should support the UN's mission in Syria!" "We should prevent Russia from further arming Assad!" "We should make clear to those who support the Islamists that they had better stop doing so."

We should, but apparently we can't -- and therein lies the problem. To base our policies on airy appeals that haven't produced any results in the last two years is merely self-deception.

There are many good reasons to refrain from military involvement in other countries. In the case of Syria, however, some of the rationales put forth are simply illogical. For example, there is the argument that there are already so many weapons in the country that it doesn't make sense to send in any more. By that logic, we could have spared ourselves the invasion of Afghanistan, not to mention the entire arms race conducted in recent decades.

The curious thing about many German politicians is that they continue to praise Germany's involvement in Afghanistan, even though it has been a failure when measured by its own goals, yet they don't want to intervene militarily in a situation in which it would make sense to do so. In taking this stance, these politicians are ignoring one fundamental difference: In Afghanistan in 2001 and in Iraq in 2003, there was no revolution from within, no vision of a different form of government; instead, there was an invasion from outside. The US was able to topple Saddam Hussein and the Taliban, but not to create stable governments to replace them.

Syria is different. The uprising that began here in many different places simultaneously and without centralized leadership gave rise to hundreds of rebel groups that are not subordinate to any single, centralized command, yet manage to cooperate passably well. Committees for self-government have formed in the places where Assad's troops have been driven out. What is in place at the moment is chaotic and inadequate, but people here don't want anarchy. They want a government -- just a different one from what they had. Lawyers, businesspeople, religious leaders and civil servants are all doing their best to maintain public order. The question is how long this system will continue to function.

Worn down between the regime's brutality and the jihadists who have been growing stronger for months, embittered by the West's passivity and terribly impoverished, some people have turned to brutality, while others have fled. More and more of the rebels have joined with the radicals, not least because these groups receive abundant supplies from networks of influential clerics in the Gulf States. "Ahrar al-Sham" -- one of the two largest fundamentalist groups within the rebels' ranks -- "always buys the latest weapons, and plenty of them. They have money," a middleman in northern Syria reported in December.

To hold up these Islamists as a reason not to get involved is to confuse cause and effect. And those who defend the arms embargo -- as German Chancellor Angela Merkel does -- on the grounds that supplying the rebels with arms could further fuel the conflict, are misjudging both the nature of the regime and the dynamics at work in this war.

Assad has systematically tested out whether the international community would object to his use of tanks, of military helicopters, of jets and of missiles. US President Barack Obama has drawn a line only at the use of chemical weapons, which taken the other way around amounts to a declaration that the US will not get involved under any other circumstances. Assad and his generals would sooner accept the country's destruction than yield their grip on power. And as long as the West allows them to continue, they will.

This is the prospect we face: an utterly ravaged country, with 6 million instead of 1 million refugees, and a civil war that will drag Lebanon along into the fray -- a war that will not end with Assad's downfall, but will continue indefinitely, fueled by a cycle of revenge and retaliation.

Should that happen, Germany's government will of course condemn it vehemently. 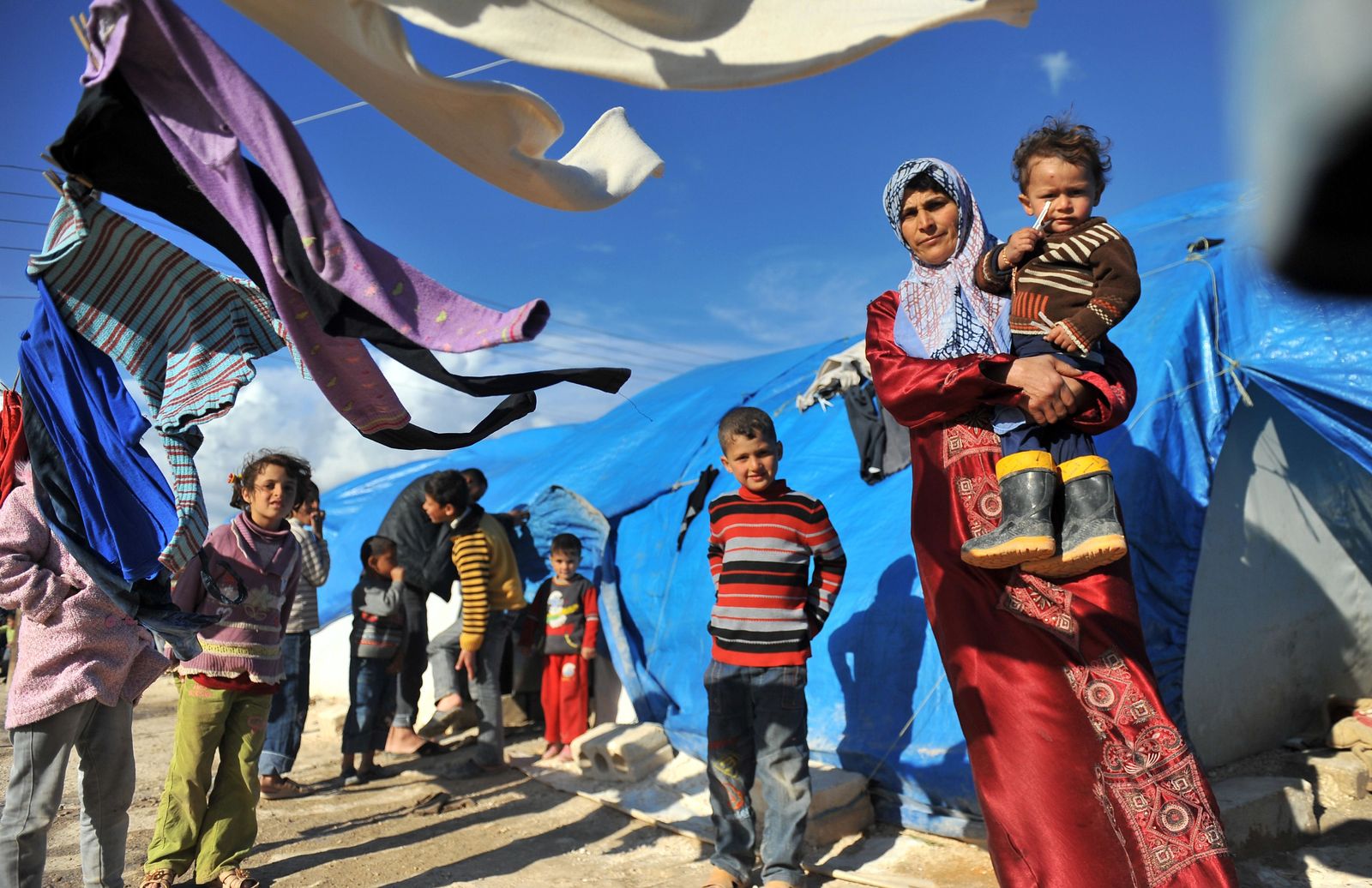 A Syrian woman carries her child in a refugee camp near the Turkish border.