During the course of the Franco-Prussian war, when Napoleon III withdrew his garrison from Rome in 1870, the pope lost the last vestiges of his temporal power -- the Papal States -- to a partly united Italy. Yet only a few weeks earlier, at the First Vatican Council, he had gained a far more valuable replacement: the dogma of papal infallibility. Since then, the bishop of Rome has maintained that he is exempt from the possibility of error. Roma locuta, causa finita (Rome has spoken, the case is closed).

Opponents of this claim prayed in vain that the Lord would summon his servant Pius IX to heaven before he could inflict even greater damage. British historian Lord Acton, a publisher of Catholic newspapers, coined his famous axiom with regard to this dogma: "Power tends to corrupt, and absolute power corrupts absolutely."

At the time, conflicts between the Una Sancta and its critics were significantly more aggressive than they are today. Nevertheless, bishops these days are particularly vocal in their complaints that people are too critical of the Church. Just last month, in response to an interviewer's question about the Roman Curia, the governing body of the Catholic Church, Cardinal Jorge Mario Bergoglio said that "journalists sometimes risk becoming ill from coprophilia and thus fomenting coprophagia, which is a sin that taints all men and women." (Coprophilia being an abnormal interest in feces, especially the use of feces or filth for sexual excitement; and coprophagia being the consumption of feces). Now, as the new pope, it is his job to tame his ecclesiastical city-state. Can he do this? His German colleague in Cologne, Cardinal Joachim Meisner, a close friend of the retired pope, recently complained that there is widespread "Catholic-phobia" out in the world.

Really? Only outside the Church?

When Benedict XVI was asked before his pontificate if he was concerned that so many Catholics no longer followed the papal doctrine, he answered that it didn't bother him much because the truth doesn't depend on a majority vote.

This is the underlying reason for true Catholic-phobia, which is the shepherd's fear of the flock -- in other words, the refusal to recognize that the demands of the Church and the everyday life of the faithful are diametrically opposed to each other on many issues. A single example should suffice: The number of children born out of wedlock in the Catholic states of Europe is over 20 percent in Italy and Poland, over 30 percent in Ireland, nearly 40 percent in Spain and over 50 percent in France. So much for the subservience of sheep.

To make it easier for the faithful to accept the hard-to-swallow infallibility claim, which safeguards the pope's authority and secures the Curia's role as the central leadership apparatus, generations of teachers of religion have explained that nothing will be added to the dogma of the Church that the majority of Catholics do not believe in. That may have been true in 325 BC, at the First Council of Nicaea, but it is no longer the case today when it comes to women's rights and celibacy.

The Argentinean cardinal, who said that his fellow brothers "almost went to the end of the world" to make him the new bishop of Rome, may be able to instill a renewed commitment to the Church among Christian communities in Latin America, but for the Catholics of Europe, he represents the spirit of Benedict's papacy. Like the outgoing pontiff, Francis warns of secular values that are the work of the devil. In the areas in which the Church and the faithful diverge most markedly, the statements of the new pope give little hope for change, despite his humble appearance.

John Paul II and Benedict XVI have further strengthened the primacy of the office of the Bishop of Rome because they believed that the Second Vatican Council, held from 1962 to 1965, created centrifugal forces that caused them to fear for the unity of the Church. Both popes engendered a College of Cardinals that largely agrees on its conservative view of the world, but also runs the risk of being abandoned by many of the faithful. What is consequently needed is greater dissonance -- the recognition that the Church in Latin America is different than it is in Africa or Europe. It is necessary to decentralize and strengthen the national churches.

Back in the 19th century, German author Heinrich Heine critically commented: "Clerics have no fatherland; they only have one father in Rome." To safeguard his own interests and -- at least in Western secular societies -- to at least slow the Church's slide into insignificance as an archaic religious sect, this father should finally grant both his priests and the faithful a fatherland in which they can all collectively live and act as they see fit. 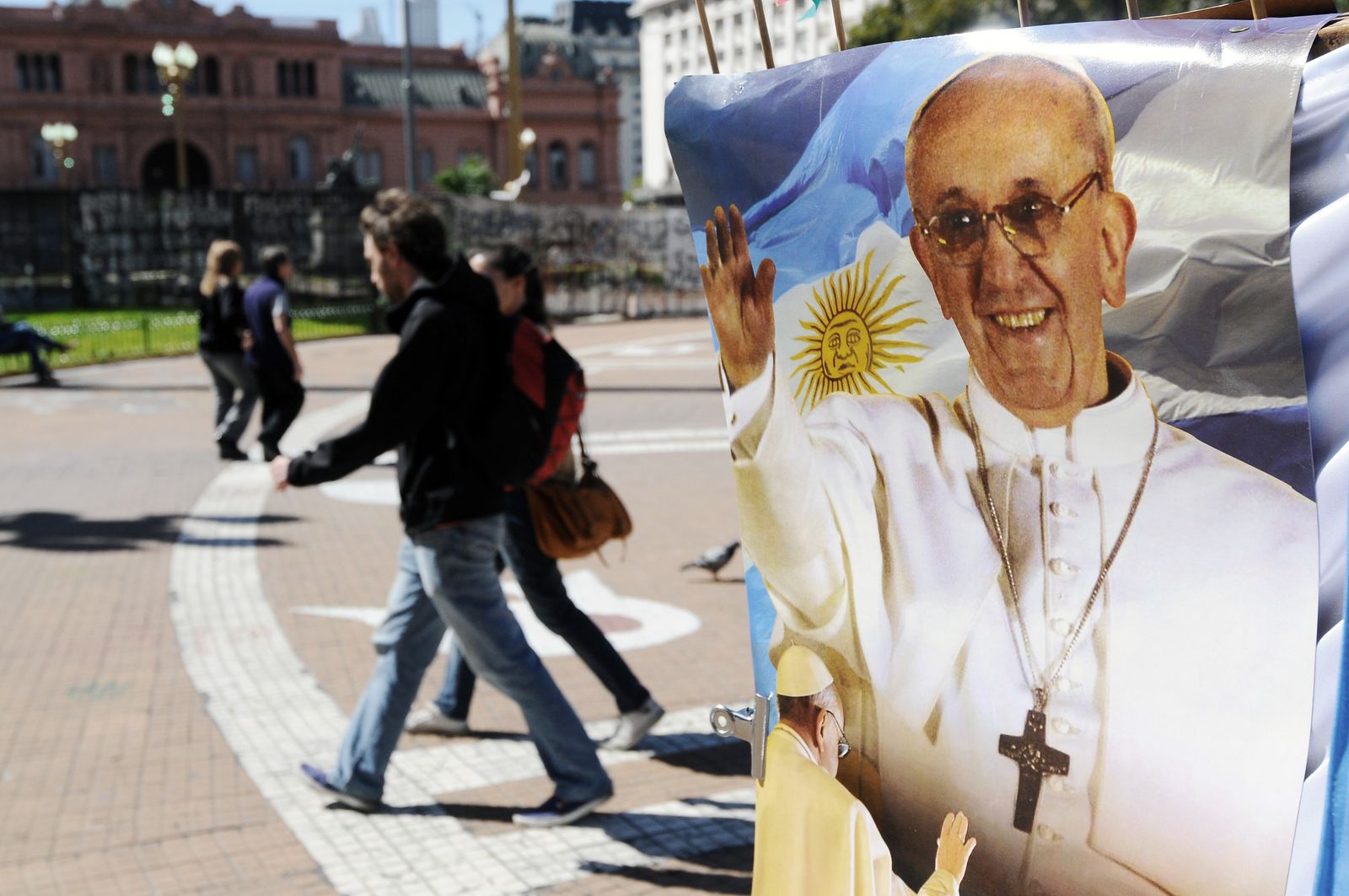 A stall with Pope Francis souvenirs near the Metropolitan Cathedral in Buenos Aires.