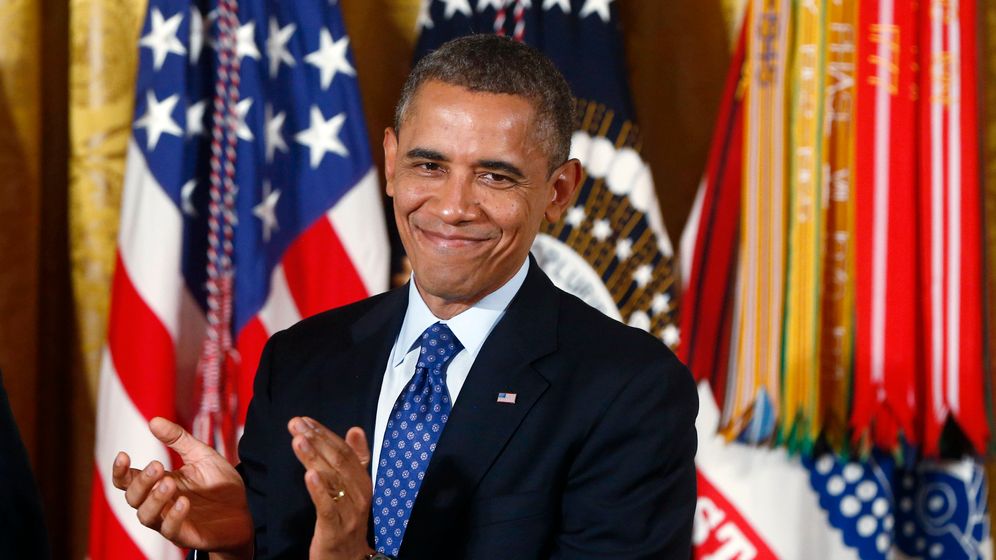 The president kept things short, speaking for only three minutes on Wednesday night to praise the debt compromise reached by Congress. After he finished, a reporter called after him: "Mr. President, will this happen again in a couple of months?" Barack Obama, who was on his way out the door, turned and answered sharply, "No."

But such optimism has proven to be unrealistic in the past. With his re-election in 2012, Obama thought he could break the Republican "fever." Instead, the conservatives paralyzed the government and risked a federal default just so they could stop Obama's signature project: health care reform. And this despite the fact that "Obamacare" had been approved by a majority of both houses of Congress, was upheld by the US Supreme Court, and was endorsed by the American people in the voting booths.

No, the democratic process cannot reduce this "fever," and probably won't during the next fight, either. On the contrary, the political crisis has turned out to be a systemic crisis.

America's 237-year-old democracy is approaching its limits. Its political architecture was not designed for long-lasting blockades and extortion, the likes of which have been enthusiastically practiced by Tea Party supporters for almost the last four years. The US's founding fathers proposed a system of checks and balances, not checks and boycotts.

In hardly any other western democracy are the minority's parliamentary rights as strongly pronounced as they are in the US, where a single senator can delay legislation, deny realities, and leverage the system.

In Germany, the government is built from a majority in parliament. In America, the president and his allies in Congress have to organize majorities for each new law. But for a long time Obama has hardly been able to find any -- not for immigration reform, or new gun control laws, or even for the budget, as the world's largest economy has been making do with emergency spending measures since 2009.

Scarcely 50 right-wing populists, led by Tea Party Senator Ted Cruz, have been pushing their once proud Republican party into a kamikaze course. Why are the other Republicans letting them do this? They are afraid of radical challengers within their own party in their local districts.

Meanwhile, the Democrats hardly pose a threat, because over the past several years the borders of the congressional districts have been manipulated in such a way that they almost always clearly go Republican or Democratic. As a result, America loses the representative nature of its representative democracy. In the congressional elections in 2012, Democrats won 1.17 million more votes than Republicans, but Republicans got 33 more seats in the House of Representatives.

Changes in majority rarely exist anymore. Not even 10 percent of the 435 seats in the House of Representatives are considered competitive. As a result, those who would be willing to compromise in Washington are already punished during the primary seasons back home, which was how the last moderates were pushed out of Congress.

During the recent debt ceiling fight, Tea Party hotheads called their colleagues who were willing to talk with Democrats the "surrender caucus." Anybody who would vote for a compromise "would virtually guarantee a primary challenger," Kansas Republican Tim Huelskamp threatened on Tuesday.

The once civil political discourse in Washington has long since turned into a fight of bitter rivals trying to inflict the worst possible wounds. One is no longer respected as a worthy opponent, but attacked like an enemy. This behavior is in turn egged on by talk radio personalities, for whom compromise is a sign of weakness and lies are just another form of reality.

Adding to this is the almost unlimited flow of campaign contributions, which finance the increasingly brutal mudslinging during congressional elections every two years. Behind those donations are often radical groups or interested billionaires, such as the brothers David and Charles Koch, who have financed the Tea Party and are thought to have helped plan and direct the most recent crisis.

At the same time, the US is undergoing huge demographic shifts, which were recently evident in Obama's re-election. The old "white majority" is slowly shrinking into a minority. One of the consequences has been the rise of the Tea Party, which is loudly pushing back against change, Obama and the government itself.

Tea Party protagonists such as former Alaska governor Sarah Palin beguile their followers with folksy language they can understand and proudly hold up ignorance and stupidity as badges of honor in their battle against the "elite" and their intellect.

The results were evident during this most recent debt ceiling crisis. A federal default by the US would not be so bad, romanticized Florida Republican Ted Yoho, demonstrating a happy ignorance of economic issues. "I think, personally, it would bring stability to the world markets," he said.

This time around the US has just barely avoided testing out such crazy theories. But as the system limps along, the next crisis already has a deadline: Jan. 15, 2014, when the bill agreed to on Wednesday expires.