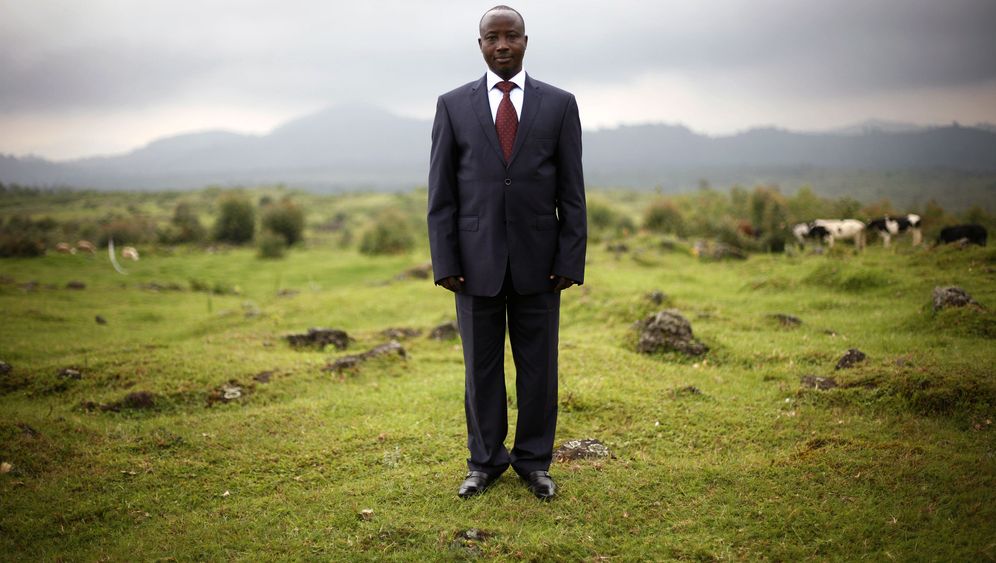 Sitting in the well-tended garden of the Caritas Hotel, rebel officer Amani Kabasha was in a good mood, enjoying his victory over the Congolese army. "In the port of Goma alone, 500 tons of military equipment are now in our hands," boasted the man from the rebel group known as the M23. "Now we have missiles, lots of ammunition, even a tank." Kabasha allowed his gaze to sweep over the hotel grounds, which his men commandeered after taking the city of Goma, then out toward Lake Kivu and the Virunga Mountains.

M23's top brass, under Col. Sultani Makenga, took up residence in this paradise after capturing Goma on Nov. 20. The United Nations has referred to Makenga and the group's other commanders as "notorious killers." On December 3, these rebels in the Democratic Republic of the Congo retreated from Goma, taking their spoils into the surrounding mountains and marching farther north. They did so on the condition that Congo's government negotiate with them, but they have reportedly only withdrawn to positions 3 kilometers (1.8 miles) from the provincial capital rather than the 20 kilometers they agreed to.

There, they can wait to see what concessions embattled President Joseph Kabila, in the faraway capital of Kinshasa, is willing to make to restore peace to the mineral-rich eastern part of his country. The rebels don't know yet precisely how the conflict might continue, but their demands are clear: They want money, and they want land.

Negotiations between M23 and the Congolese government were scheduled to begin in Kampala, the capital of Uganda, on Friday. However, M23 president Jean-Marie Runiga told the AFP on Friday that delays were expected, and that the talks might actually start on Sunday.

"More than 200,000 Tutsis have had to flee the violence in Congo and are now living in camps in Rwanda, Uganda and Tanzania," Kabasha claimed. No one can verify that number. The officer maintained that the camps exist and that the Tutsis there "want to return to Congo -- that's what we're fighting for." The goal is to gain more land to the west, mainly for the benefit of the Tutsis currently living in densely populated Rwanda.

The Democratic Republic of the Congo covers an enormous area compared to its tiny eastern neighbor, Rwanda, which has been under the firm-handed control of Paul Kagame, a Tutsi, since 1994. War has raged in the eastern part of Congo for some 15 years. Tutsi militias roam the area, looking for natural resources and enemy Hutu militias. The Tutsi militias' enemies also include members of the government's demoralized army and various Mai-Mai militia groups.

Congo can be a confusing nightmare of a place. The country is as big as Western Europe but home to just 70 million people, who in turn belong to 400 ethnic groups and speak nearly as many different languages. People here are fighting for their lives, and alliances shift as quickly as the names of the militias. The M23, for example, previously belonged to a rebel group run by Gen. Laurent Nkunda, then became part of the Congolese army, but is now once again fighting against the army.

In most cases, though, the dividing lines pit Hutus against Tutsis. And, in all of this, there is one constant: The people to suffer most are civilians, who often don't even know who is currently attacking whom.

Three hundred kilometers (185 miles) north of Goma, long military convoys were rumbling through Beni. The small trading town is important to the Congolese army because trucks transporting the country's rich supply of natural resources -- gold, diamonds, coltan, cassiterite, nickel, copper and tropical wood -- pass through here on their way past the Rwenzori Mountains and into Uganda.

To Elvis Sikiline, a 17-year-old resident of Beni, it looked very much like war had found him again. For a year now, Sikiline has participated in a program run by the World Vision organization that helps former child soldiers. Together with Jonathan Kibondo, another former child soldier, Sikiline runs a small carpentry shop, where the two young men build beds and tables. Now Sikiline was consumed by fear that the militias might come back, abduct him and force him to fight again -- as they did seven years ago.

Sikiline was just 10 at the time, selling peanuts at a small street-side movie theater in the city of Butembo. "One evening, men with guns stormed in and took all the children," he said. Together with 20 other boys, Sikiline was thrown onto the back of a truck and driven into the woods.

"We learned we were now under the control of a Mai-Mai militia that was fighting against the Tutsis," Sikiline said. "After a week, we had to make a decision: If we joined the fighters now, they would eventually set us free." Two boys refused -- and were killed in front of the others: one hanged, the other shot. Then the group marched on with its new recruits.

For the next three months, the boys learned how to fire assault rifles and anti-tank rockets. Then they were full members of the militia, 19 children at war. They traveled through the forests, attacked villages, stole cattle and raped women. Before each battle, militia members rubbed their skin with plants that were supposed to make them invulnerable or drank a bitter brew thought to improve one's shooting.

Sometimes they fought against the government and sometimes for it, but they almost always fought against the hated Tutsis. "I killed many Tutsis," Sikiline said -- Tutsis like those who make up the majority of the M23. At night, the boy was plagued by nightmares. He thought about his father, a soldier with the government's army. Had he perhaps been forced to fight against his own father? "We drank a lot of beer and smoked pot to drive away those thoughts," he said.

Elvis Skiline's friend Jonathan Kibondo volunteered to join the Mai-Mai when he was 10. His father had died shortly beforehand, which "made life hard," Kibondo said. So, one day, the boy packed a few clothes and set off to join a militia. His is not an uncommon story in Congo, where Mai-Mai leaders promise their fighters food, money, weapons and adventure. Many families voluntarily send their children to join these bands, which in return promise a bit of protection in the endless war.

Kibondo's main job was to cook for the fighters, but he also fought. This confusing and terrible experience lasted six years. One day, sent to fetch water from a river, he simply ran away. He made it back to his city and found his mother's house. She thought he had died.

Last week, both of them were praying that war would pass them by this time.