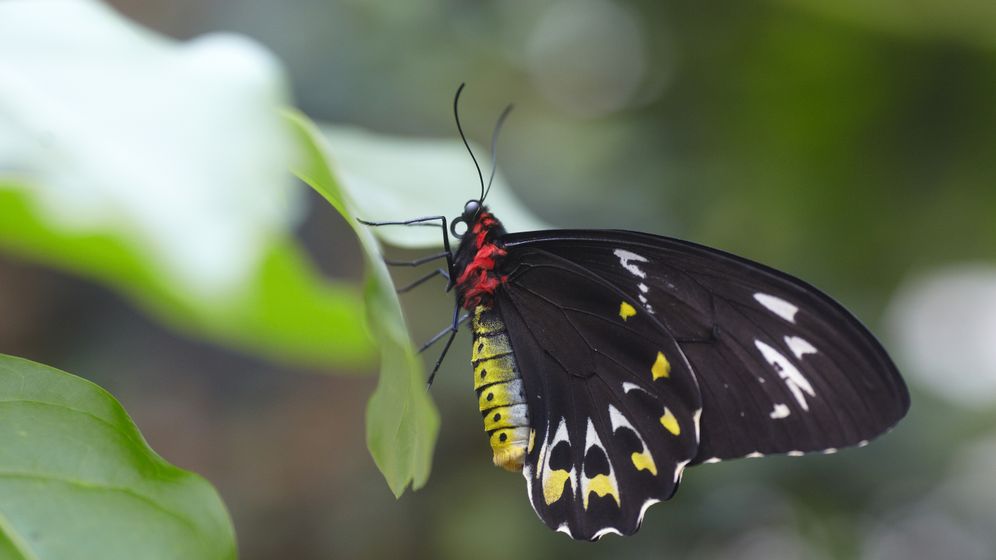 The butterfly's silhouette is sharply outlined against the morning sky. It flies high up into the air, beating its wings slowly, more like a bird than a butterfly. Its long, narrow wings are reminiscent of a swallow's, as they shimmer in the sunlight like iridescent sequins.

The insect makes a wide circle around Grace Juo's small stilt house and lands on a bright red hibiscus blossom. In Jimun, the language of the indigenous people, the Queen Alexandra's Birdwing butterfly is called a dadakul. It's the world's largest butterfly, with females attaining wingspans in excess of 25 centimeters (10 inches). "We are proud of our butterfly, and we take good care of it," says Juo, glancing at the insect, which has now inserted its long proboscis into the flower.

Juo, a Melanesian, lives in Kawowoki, a small village of huts on the Managalas Plateau in eastern Papua New Guinea. The volcanic soil here is dark and heavy, and the rainforest is an exuberant shade of green. The plateau is the last remaining habitat of any significant size of the Queen Alexandra's Birdwing butterfly, one of the world's rarest insects. Some butterfly collectors would pay thousands of dollars for a single specimen. Local residents like Juo hope that they will soon benefit from the appetites of trophy-hungry collectors.

But multinational corporations believe that oil and natural gas deposits lie beneath the tropical paradise and the rainforest is threatened. Prospectors have also found copper and gold, and oil palm plantations are proliferating in the region.

The temptations of the modern age are reaching Papua New Guinea, a country divided into hundreds of ethnic groups. It has a disastrous infrastructure, is wracked by tribal feuds and is at a high risk for disease epidemics. The history of the Queen Alexandra's Birdwing butterfly isn't just the tale of a rare species. It also revolves around the question of how to go about protecting species in a developing country that is undergoing rapid change.

The search for answers begins behind a barbed-wire fence in Port Moresby, the capital city. Armed guards provide security against the city's criminal gangs, known as "rascals." A rattling air-conditioner helps to stave off the heat and humidity in the office of the organization Partners with Melanesians.

Kenn Mondiai and Rufus Mahuru are sitting at a dark table, explaining their rescue plan. "For the last seven years, we've been discussing ways to save the Managalas Plateau together with the local people," says Mondiai, a heavy man with a round face and a moustache. The activist wants to transform the habitat of the giant butterflies into one of the largest conservation areas in Oceania. "The butterfly helps us convince the people to support this cause," he says. "It symbolizes the diversity and value of our nature."

British naturalist Albert Meek was the first European to spot the giant butterfly in the rainforests of Papua New Guinea. Hired by the zoologist Lord Walter Rothschild, Meek explored the region in 1906 to find fresh trophies for Rothschild's private zoological museum in the English town of Tring.

One day, Meek discovered a butterfly flying at a high altitude, and promptly brought it down with a shotgun. The adventurer dissected the butterfly and sent it to England. Rothschild named the animal "Ornithoptera alexandrae," in honor of Queen Alexandra, the wife of King Edward VII.

Meek's first specimen was a female. A year later, he captured a male near Popondetta in Papua New Guinea's Oro Province. Today the town can be reached by taking a half-hour flight from the capital. This is followed by an exhausting trip by Land Cruiser on muddy trails.

Several bridges were washed away in a recent flood, and the SUV struggles through hip-high water, even getting stuck in the sandy riverbed for a while. After a grueling, three-hour drive, we reach the Managalas Plateau, 36,000 hectares (about 140 square miles) of privately owned rainforest, populated by about 20,000 people from 10 different cultures, each with its own dialect.

This is the realm of the giant butterfly. The male looks as if it were wearing a magnificent cloak of turquoise and green, covered with a layer of gold dust. In contrast, the wings of the larger female are a velvety black, interspersed with a few yellow and cream-colored patterns here and there.

The threatened butterfly is vulnerable because of its unusual reproductive biology. The female lays its eggs exclusively on a poisonous vine called Aristolochia. Once the caterpillars have hatched, they ingest the plant's toxic leaves, making them unpalatable for potential predators.

The Aristolochia winds its way up into the crowns of jungle trees, which can grow to heights of up to 40 meters (131 feet). The butterfly would be lost without the vine, so propagating the Aristolochia is one of the main goals of conservationists.

Conwel Nukara, 31, is the local head of the butterfly project and an expert in Aristolochia cultivation. His teeth are stained red from chewing betel nut, a stimulant commonly used by the indigenous peoples of the region. The Melanesian, walking barefoot, leads us into the garden behind his house, where he has set up a greenhouse made of green gauze.

Aristolochia cuttings are planted in neat rows inside the greenhouse, and a number of the butterfly's pitch-black caterpillars are already nibbling away at some of the leaves. Bright red appendages protrude from the animal's body like poisonous barbs, while a yellow band runs around the middle of its body. "We want the animals to reproduce quickly," says Nukara. "The larvae can develop and pupate in peace here. I release the butterflies once they've emerged."

Nukara is trying to convince his entire community to raise butterflies and, as part of his campaign, he makes regular visits to schools in the area.

"We show these butterflies to our children," he explains, spreading the insect's wings, which have become frayed after being touched by many small hands. "We want them to discover at an early age what a treasure we have in this area."

He means it literally. One of the reasons local residents pay such conscientious attention to the giant butterfly is that they hope to make money with the creatures in the future. But that could prove to be difficult.

The Queen Alexandra's Birdwing is on the red list of threatened species of the International Union for Conservation of Nature (IUCN), and its international trade is banned. From the perspective of species conservationists, the butterfly satisfies all of the criteria to make it a critically endangered species: It lives in only one area, Oro Province, its numbers are unknown, and its habitat is increasingly disappearing.

The problem is already obvious in the flatlands around the provincial capital Popondetta, which is surrounded by plantations of tightly packed oil palms. Local farmers also grow coffee and cocoa. Hardly any of the rainforest, together with the vines that the butterfly urgently needs, is still left.

Eddie Malaisa is a wildlife officer with the Oro provincial government. He has been concerned with the giant butterfly for the last 25 years. "The butterfly population continues to drop," he warns. "We only find two or three per month on the lowland plains."

On this particular day, Malaisa has an appointment with Paul Maliou, a manager with New Britain Palm Oil Limited (NBPOL). Large trucks are parked on the grounds in front of Maliou's office, fully loaded with the red fruits of the oil palm. Across the street are long rows of the trees. When sunlight strikes the long palm fronds, they create shimmering patterns on the ground.

NBPOL signs contracts directly with the farmers and sells their crops for them. Maliou's job is to ensure that this is done in a sustainable way. "We assure that our operations don't go into areas that affect the butterfly," he asserts. But wildlife officer Malaisa begs to differ. There were once 27 butterfly reserves planned for the region, he says, and now "twenty of the areas went to palm oil." Malaisa is left to manage only seven small reserves.

The government employee seems helpless. His budget doesn't even include money for a car, which he needs to patrol the reserves. Ironically, the Queen Alexandra's Birdwing is depicted on the flag of Oro Province.

"The butterfly is an important part of our culture," says Malaisa. But he too recognizes that farmers will only protect the insect if they can make some money with it.

To address the problem, Malaisa has proposed compensating all landowners who preserve the insect's habitat by leaving some areas unfarmed. He also favors lifting the ban on trade with the butterfly. "If the landowners don't get anything out of protecting the butterfly, they will change the butterfly habitat to oil palm, cocoa or coffee and the butterfly will become extinct," the wildlife officer warns.

Could Lifting Ban on Trade Help Save Butterflies?

A softening of the trade ban could indeed be the butterfly's last chance. Buyers on the black market would pay up to $10,000 a specimen. If the trade were legalized, Malaisa argues, the farmers could charge several thousand dollars per insect. "What is worse?" he asks, "To legally trade a few butterflies or to watch the animal go extinct?"

Do conservationists have to revise their thinking and accept that species like the Queen Alexandra's Birdwing can only be saved if they have a market value? Activist Kenn Mondiai of Partners with Melanesians also favors adopting a new strategy. "If we want to preserve the forest on the Managalas Plateau, and if no oil palms are to be grown there, then we have to propose alternative sources of income to local residents," he says.

It's afternoon in Kawowoki by now, and half the village has gathered in front of Grace Juo's house to look for a butterfly. The animal that was fluttering around her hut in the morning was a male. Now everyone hopes to be able to show the visitor from faraway Germany a female specimen of the royal butterfly.

While the women roast bananas and sweet potatoes in the embers of a fire, the men dispense advice on how to stalk a butterfly. The insects are usually seen high above the treetops, but only when the sun shines. Otherwise the moisture from the forest would make their wings too heavy.

But the weather is favorable today. Suddenly they all jump up and stare at the tops of nearby large trees. A female Queen Alexandra's Birdwing is gliding through the warm air at a surprisingly fast pace. Grace Juo excitedly lifts her arms up to the sky.

"The world has to know about our butterfly," she says, and with shining eyes she follows the flight of the dadakul, "and then people will come here with bundles of dollars in their hands!"