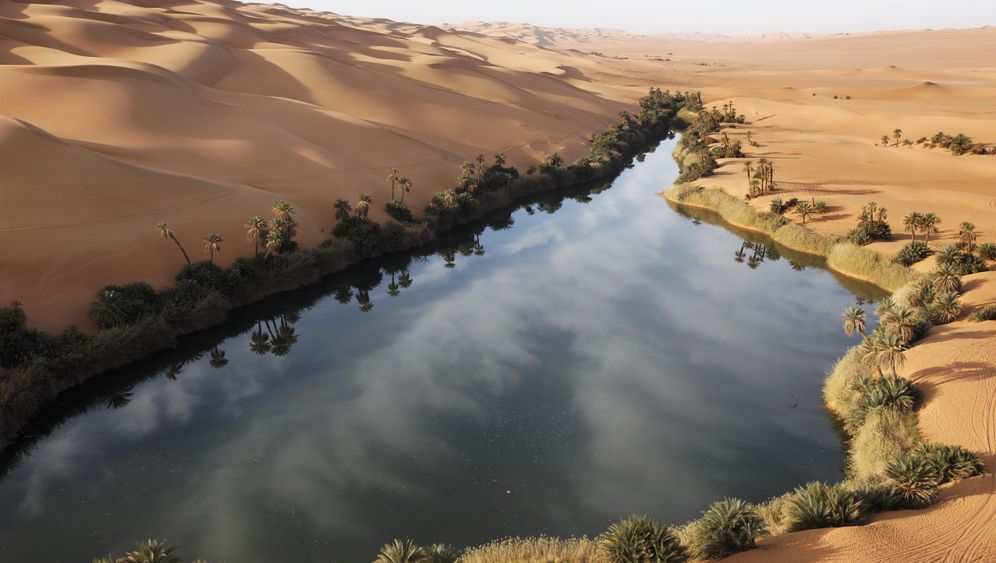 True masters of water management once lived in the desert of what is now Jordan. It took the Nabataeans only a few decades to carve the city of Petra out of sandstone cliffs. In addition to crafting now world-famous decorative tomb facades, they built a sophisticated system of water pipes and cisterns, which made it possible for the city to exist in the dry wilderness in the first place -- more than 2,000 years ago.

Today trucks rumble through Jordan to supply the population with drinking water. The water sloshing back and forth in their tanks is often thousands of years old, pumped from fossil groundwater reservoirs that filled up when the region wasn't as dry. Millions of cubic meters of water are now being pumped from such aquifers every day in the Middle East and North Africa. The next hydraulic engineering project is currently underway in Jordan, at a cost of $1.1 billion (€850 million). Starting in the spring of 2013, about 100 million cubic meters a year will be pumped out of the Disi aquifer in the country's south, in addition to the 60 million cubic meters a year already being taken from the aquifer today. The water will then be pumped through pipelines to the capital Amman, some 325 kilometers (203 miles) away.

But radiation experts warn of an invisible danger. Tests have revealed that the water contains high levels of naturally occurring radioactivity, with samples exhibiting radiation levels well above World Health Organization (WHO) radiation guidelines. The health risk doesn't just affect Jordan, but virtually all of the countries in the Middle East and North Africa.

Radioactivity Up to 30 Times Higher than Safety Standards

An explosive study on the problem was published in February 2009, but it has only attracted attention in the professional world until now. A team working with geochemist Avner Vengosh of Duke University in Durham, North Carolina, had tested radioactivity levels in 37 samples from the Disi aquifer. According to the findings, published in the journal Environmental Science & Technology, the water from the aquifer, which is about 30,000 years old, is up to 30 times as radioactive as the WHO considers safe.

The radioactivity is caused by natural uranium and thorium that can occur in sedimentary rock. Their decay products include radium, which can cause bone cancer if it enters the human body. Two isotopes, radium-226 and radium-228, with half-lives of 1,600 years and less than six years, respectively, are especially dangerous.

Using Vengosh's data, the German Federal Office for Radiation Protection (BfS) has now calculated the magnitude of the health risk. According to its estimates, a person who drinks two liters of water a day from the Disi aquifer is exposed to radiation levels of between 0.99 and 1.53 millisieverts a year, or 10 to 15 times as much as WHO considers safe. According to the BfS, if we assume that the population receives an average annual dose of one millisievert and has an average life expectancy of 70 years, the radioactive drinking water will increase the normal number of deaths by four people per 1,000. When this estimate is extrapolated to the roughly two million residents of Amman, who are to be supplied with drinking water from the Disi aquifer in the future, it comes to about 8,000 additional deaths. The calculation only applies to the absorption of radium that occurs when people drink the water, without taking into account other ways in which radiation can enter the body, such as when the water is used to irrigate fields and radiation becomes concentrated in vegetables.

Similar Geological Conditions Across the Region

Jordan is only a small part of the problem. The same geological conditions that make the water from the Disi aquifer radioactive prevail in large parts of the Middle East and North Africa. "The problem probably applies to all sandstone aquifers in the region," says Vengosh, which means that it affects hundreds of millions of people.

Only 10 percent of the Disi aquifer passes through Jordanian territory. The rest is in Saudi Arabia, where it's called the Saq aquifer. BRGM, the French national geological service, took samples from 64 locations in the aquifer. According to its 144-page report published in 2008, radioactivity levels were generally well above the WHO guidelines. "The problem of radioactive contamination of the groundwater is complex and probably widespread," the French geologists conclude. "It must be studied as quickly as possible, because of its potentially critical consequences." In its research, the BRGM encountered a strange phenomenon: Contamination with radionuclides appears to be especially high in places where the water level in the aquifers is declining the most precipitously. While the reasons are unclear, say the French scientists, the water threatens to become "unfit for both human consumption and agricultural use."

Underground Aquifers Vital for the Region

This is a worrisome conclusion, since fossil groundwater is now essential for the survival of agriculture in the region. According to the BRGM, the amount of water being pumped from the Saq aquifer increased more than fourfold from 1985 to 2005, from about two billion to more than 8.7 billion cubic meters per year. Saudi Arabia already derives about half of its water from aquifers.

Israel also pumps water from fossil reservoirs to irrigate its fields in the Negev Desert, and Egypt has pumped fossil groundwater in oases since the 1980s. But Libya operates the world's largest pumping operation, the "Great Man-Made River." Every day, about 1.6 million cubic meters of water are pumped from the Nubian Sandstone Aquifer System, at a rate of more than 18,500 liters per second. When it is finished, the massive system of wells, pipelines and reservoirs is expected to conduct 6.5 million cubic meters of water a day from the desert to Libya's coastal cities. It's water they urgently need. Their own aquifers are now so heavily depleted that they are becoming brackish as a result of seawater infiltration, a problem that also plagues other coastal cities in the region.

Saudi Arabia, at least, is treating fossil groundwater and removing radioactive particles, says Christoph Schüth of the Technical University of Darmstadt in western Germany. But elsewhere, especially in rural parts of North Africa, the situation is "problematic." The quality of the groundwater from the Nubian Sandstone system, says Schüth, has presumably been "studied only very incompletely," and Libya lacks water-treatment technologies. "In principle," say Schüth and his colleagues, "this affects many sandstone aquifers." They published the results of their research in 2011 in the International Journal of Water Resources and Arid Environments.

The Jordanian Ministry of Water and Irrigation (MWI) doesn't see the radiation as a problem, claiming that its tests produced much lower results than those of the US experts. The MWI engineers also plan to dilute the water with water from sources with no radioactivity, which they say will reduce the annual radiation exposure to 0.4 millisieverts.

But even that dose, which would still be four times as high as the WHO standard, will be very difficult to achieve. According to an internal document produced by Germany's Federal Institute for Geosciences and Natural Resources (BGR), the Jordanians measured radioactivity levels in a part of the Disi aquifer where radium activity is especially low. Most of the water, however, is to be obtained from a part of the aquifer where radiation levels are much higher. According to the BGR, it would take the addition of at least one billion cubic meters of non-contaminated water a year to bring exposure to levels below the WHO standard. It is unclear where this much water would come from, and the MWI did not respond when asked about the issue. The ministry is also unwilling to say whether Jordan plans to treat the water the way Saudi Arabia does. Officials say that they cannot provide any specific information at the moment, because they must first conduct more analysis and collect more data.

This is surprising, given the Jordanians' contractual obligations. One of the largest financial backers of the Disi project is the European Investment Bank (EIB), which approved loans totaling $225 million in May 2009. In its contracts with the EIB, Amman pledged to begin testing the water from every well during the construction phase, and to submit regular reports. If Jordan failed to fulfill this obligation, "the EIB could revoke the loan in an extreme situation," warns a bank spokeswoman.

In early November, the EIB was still waiting for the complete report, which the Jordanians were supposed to submit at the end of September. They have already provided the bank with readings for about half the wells, which, according to the EIB, show that the average annual dose of radioactivity "is still above the allowed limit."

There are already initial signs of the possible health consequences. In 2010, King Saud University examined 10 men who change filters in underground wells. Their blood was found to contain 11 times as much chromosomal damage than that of controls, it said in an article in the journal Radiation Protection Dosimetry. These changes in genetic material can lead to cancer and illnesses in offspring.

Still, the use of fossil water could end up being the lesser of two evils. Although some of the water contains high radiation levels, it is otherwise considered very clean and free of bacteria. "What would happen if people consumed water of lesser biological quality instead?" asks Clemens Walther of the Institute for Radioecology and Radiation Protection at the University of Hanover in northern Germany. According to Walther, this would lead to more deaths than those resulting from radiation, partly from elevated numbers of dangerous diarrheal disease in children.