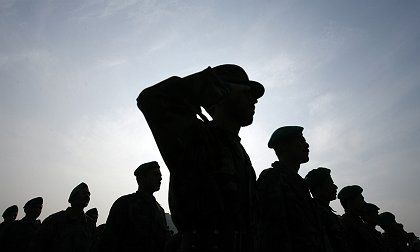 American Secretary of Defense Robert Gates is not backing down. On Thursday, he reiterated his criticism of certain NATO partner's engagement in Afghanistan and called on Europeans to stock up their troops and to send more support to the south of the country, where the government is weak, insurgents are restless and the death toll is climbing.

The comments were made at the outset of a two-day meeting of the foreign and defense ministers of the eight countries stationed in Afghanistan's south (USA, Great Britain, Canada, Australia, Denmark, Netherlands, Estonia, and Romania) that opened on Thursday in Edinburgh.

The talks are Gates' latest effort to draw attention to the urgency of the situation in southern Afghanistan, where the Taliban's influence is strongest, and to push for a stronger economy and centralized government in Kabul. Earlier this week, Gates told US Congress he was frustrated with some European allies that have been unwilling to send more troops and assistance.

Without naming names, the Republican politician said that he was especially disappointed with European efforts in the areas of logistics and training, which are central responsibilities of the German contingent, which is stationed in the relatively peaceful northern part of the country.

Senior German politicians responded coolly to Gates' comments, calling it "unjustified" and "not understandable." Stefan Kaller, spokesman for Germany's interior ministry, told SPIEGEL ONLINE on Wednesday that Gates' criticism was being "taken seriously, but is not entirely new." Kaller defended Germany's position, saying that, at €37.5 million ($54.41 million), Germany's commitment to Afghanistan in 2008 was triple that of last year and that the "basic concept -- the USA training robust forces, Germany and the EU training senior officials with more education and leadership skills -- is working well."

This is a central element of the American criticism. While the US demands fast training of desperately needed Afghan police, Germany's training programs are notoriously theoretical and lengthy -- a criticism that has come from NATO and the EU as well.

In his comments on Thursday evening, Gates attached no names to the countries that had, in his words, "failed to step up to the plate," but a BBC journalist asked him how he felt about German participation.

"The Germans have a considerable presence in Afghanistan," he said. "They are in an area that does not have a lot of violence, and so the requirement on them to engage in combat has not been as significant as those of us who are in the south and the east."

Pressure on Germany to move its troops southwards has been exercized by several NATO partners in the past, but the German position has remained unchanged. Concentrating on civilian re-construction and training, Germany has roughly 3,000 Bundeswehr soldiers stationed in northern Afghanistan under NATO's International Security Assistance Force (ISAF) and an additional 100 special forces units operating under the US-led Operation Enduring Freedom. The German parliament voted this autumn to extend both missions, although public support for the engagement has been falling steadily as German casualties rise.

A Pentagon official travelling with Gates to Edinburgh said that the Secretary of Defense would be working to draft a "master document" that explains in simple terms why NATO is in Afghanistan and what it must accomplish over the coming years. The plan could then be adopted at a NATO summit next April. The official said the paper would not propose re-structuring of the NATO forces but rather outline the purpose of the mission in order to boost overall support.

Although doubt is widespread that Edinburgh will yield any concrete results, Gates arrived with specific requests: He wants the Europeans to provide about 3,500 additional trainers for the Afghan police, more mentors for the Afghan army, 16 helicopters and at least three battalions of ground forces.

Browne backed Gates' call for greater cooperation. "We must give the Afghan authorities the support they need to deliver the kind of success that we all recognize is vital, not just for security in Afghanistan, but for security in the wider world," he said in a statement.

Since becoming Pentagon chief in December 2006, Gates has made Afghanistan a top priority, warning repeatedly of the danger of losing the ground that as been gained since American forces ousted the Taliban in 2001. With about 26,000 troops in Afghanistan, the US constitutes the largest foreign military presence.

When he visited Afghanistan last week, Gates said: "One of the clear concerns that we all have is that in the last two or three years there has been a continuing increase in the overall level of violence," focused mainly in the south.

This year has been the worst in Afghanistan since the invasion. The Associated Press estimated that more than 6,200 people have been killed in insurgency-related violence.

There are now about 11,000 NATO troops in southern Afghanistan, under British command. NATO says that more training teams are needed to help prepare Afghan forces for the eventual take-over from the 41,000 strong NATO force.