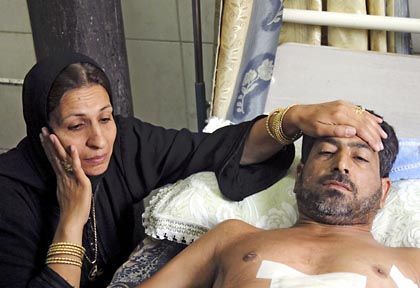 Hassan Jabir, one of the victims of the Blackwater shootout, recovers from gunshot wounds in a Baghdad hospital in this Sept. 20 photo.

There are three main routes from the center of Baghdad to the outlying suburbs and provinces beyond the Tigris River. One leads through the conflict-ridden area near the Gailani Mosque and is considered so dangerous that currently no one uses it willingly. US troops blocked off the second with concrete after the fall of Baghdad, placing it within the so-called Green Zone. Grass is now growing out of the cracks in the asphalt, essentially turning long stretches of the road into a four-lane sundeck for scorpions and lizards in the middle of the city.

All that is left for tens of thousands of daily commuters is an old city highway, which leads past the former al-Salam Palace and the conference center to Nisoor Square. The intersection is one of the busiest in the city: During Ramadan, when people head home early in the afternoon, hungry and impatient after fasting all day, it can take 90 minutes simply to cross it. It's hot and dusty; concrete barriers, installed following a recent bomb attack, block each lane of traffic. European embassy drivers coming from the neighboring diplomatic quarter avoid the square at all cost.

On the Sunday before last, a convoy led by the private American security firm Blackwater USA crossed the Nisoor Square intersection at 12:30 p.m. Although what happened in the following 30 minutes does not rank as one of the bloodiest tragedies to have occurred in postwar Iraq, for many Iraqis the incident is emblematic of their difficult relationship with America, which from their perspective operates in their country as a foreign power above the law.

Seldom have Iraqs rival factions been so united in denouncing a single event. Seldom has Iraqs unpopular prime minister, Nouri al-Maliki, uttered such a popular sentence: This crime has generated a lot of hatred in the government and the people against Blackwater.

But was it actually a crime? The US convoy came from the east and apparently planned to exit Nisoor Square to either the west or south, according to eyewitnesses. Two of Blackwaters gray SUVs blocked the roundabouts southern access point for incoming traffic, presumably to secure the convoys passage. It was a traffic situation that has become common in Iraq since the invasion. Signs on vehicles make the consequences for non-compliance unambiguously clear: Caution, stay back 100 meters, or you will be shot.

That phrase has been plastered along the sides and backs of many vehicles used by private security contractors operating in Iraq, but often the order is difficult to comply with for civilian drivers. Stuck in a traffic jam, what do you do when a security convoy presses in from a side street, horns blowing and guns pointed at you? How can you stay back 100 meters when a convoy is traveling towards you in your own lane? Deadly force authorized is also commonly written on armored vehicles -- but authorized by whom?

Iraqi traffic cop Sarhan Diab, 30, says he and his colleague Ali Khalaf, also 30 years old, did their best to halt the traffic coming from all directions in order to clear the way for the convoy, as they stood on a traffic island near the southern part of Nisoor Square. The two were summoned to the police academy in eastern Baghdad on Thursday after first being debriefed by US officials. Khalaf was later named as a key witness in a report into the tragic incident by the Iraqi Interior Ministry. Diab told SPIEGEL his aim was to get the US convoy across the intersection as quickly as possible -- perhaps too quickly, it seems. 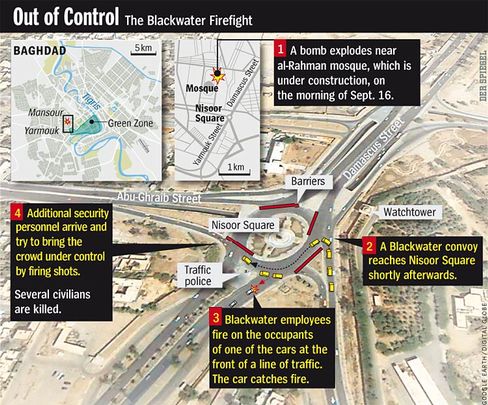 How the Blackwater firefight happened.

The driver of a white car was anxious to drive off, says Diab. I signaled to him to drive, since the distance to the convoy was around 60 meters, far enough to get traffic rolling again. According to corroborating eyewitness accounts, thats the moment when the first shot was fired. It hit the driver of the white car, a Kia Clarus, which however kept rolling ahead. A woman jumped screaming out of the car, but she too was shot dead. Shortly afterwards, the Kia burst into flames.

The first shots came from one of the two American vehicles that I could see, says Hassan Jabbar, a 45-year-old lawyer who was on his way to the Justice Ministry that day and was only two car-lengths behind the white Kia when the incident happened. A man with tattooed forearms fired from an open rooftop hatch," he recalls. "Another jumped out of the car. He also fired shots and signaled to us with angry gestures that we should go back the other way.

Jabbar managed to turn around, but since his path was blocked he also got caught in the hail of bullets. He was shot four times in the back and he was taken to Yarmouk Hospital, which is only a few hundred meters from the intersection.

Police officer Uday Kadhim, 28, who was sitting in a squad car with four colleagues at the exit to Abu Ghraib Street, describes a rain of fire that lasted 15 minutes. Dhia Hassan, a 63-year-old economist working at the nearby offices of the Patriotic Union of Kurdistan party, claims the firefight went on for 20 minutes. We all hid in the cellar, he says. 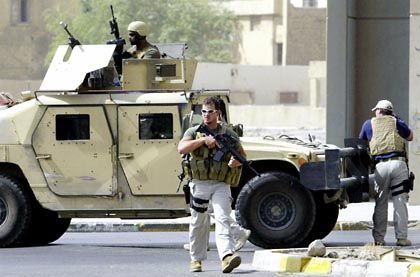 Blackwater employees secure a site in Baghdad in this July 2005 file photo.

At least 11 people -- and possibly 20, according to Kadhim, who helped in the aftermath -- lay dead on the street and in their cars half an hour after it all started. Its still unclear if and when the Iraqi security forces got involved in the shooting. All but one witness interviewed by SPIEGEL claim it was only the Americans firing. But Abdallah Salam, a 34-year-old businessman says otherwise. Near the end, he says, bullets were coming from all sides. Its possible that the American felt they were in a trap -- but they had started it all with their shots on the white car, he says. Blackwater did not report any casualties.

Just to the east of Nisoor Square is the watchtower of the former al-Salam Palace -- once the headquarters of Saddam Husseins Republican Guard -- which now houses the Iraqi national police, a unit known until recently as the Interior Commandos and thought to be infiltrated by Shiite militia members. A US Congress commission recently suggested disbanding it.

US media reports have mentioned witnesses hearing shots fired from a watchtower at a nearby police station, but details remain sketchy. The US security contractor has stuck to its claims that the convoy ran into armed enemies and that Blackwater professionals heroically defended American lives in a war zone. The firm did not respond to a list of questions from SPIEGEL. The US Embassy, which resumed diplomatic journeys outside of the Green Zone last Friday, declined to comment until its own investigation has been completed.

Members of other private security firms are also reluctant to comment on the incident. There are around 30 firms currently operating in the country with between 15,000 and 50,000 employees, drawn mostly from former soldiers and ex-cops. Blackwater is the industrys top dog and follows a high profile approach. Big vehicles, loud sirens, visible weapons, helicopters -- Blackwater favors anything that can be used to keep potential enemies at bay. The aggressive attitude of the firms security details has earned its employees the nickname testosterone monsters. Employees from other security contractors are often happy to get past a Blackwater-run convoy in one piece.

Some other firms -- mostly British and Canadian -- prefer to take a lower profile approach on the streets of Baghdad. Although they also drive armor-plated cars, their vehicles are much more inconspicuous than Blackwaters SUVs. Most are BMW or Mercedes models from the 1980s which have been stripped of conspicuous accessories and which are deliberately left unwashed so as to blend in better on the streets of Baghdad. The drivers wear checkered short-sleeve shirts over their bulletproof vests so as to look like average Iraqi men. Some even go as far as dyeing their blond hair black and wearing dark contact lenses to look more like the locals.

Dozens of such security escorts operate each week in the shadows of Blackwaters convoys in Baghdad. However, that doesnt mean they are guaranteed safe passage around the city. On May 24, four low-profile British security contractors and their client were abducted from the Iraqi Finance Ministry by a group of uniformed men driving cars from the Interior Ministry. Since that incident, according to an employee at the US Embassy, some private security firms are convinced theyre at war with the Interior Ministry.

So of course there were plenty of sarcastic comments to be heard around town after Iraqs Interior Minister Jawad al-Bolani presented a report last Thursday that cleared Iraqi authorities of any responsibility in the Nisoor Square shooting. His observation that the incident has destroyed the dignity of Iraqis, however, is right on the mark.

The people on the streets of Baghdad feel more helpless by the day -- but the government's loud declaration that it would toss the private contractors out of the country is an illusion. After all, even Iraqi government ministers are protected by Western security experts.