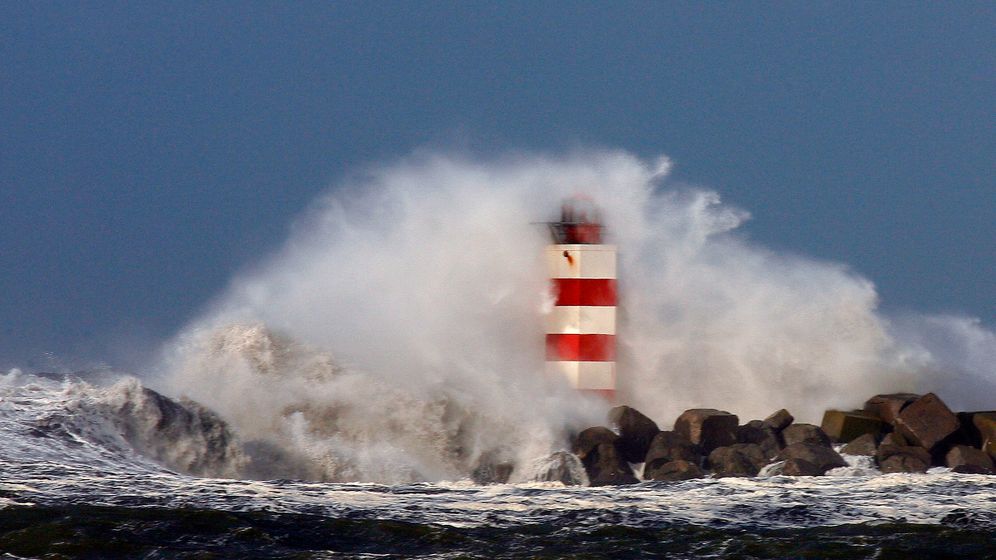 It is a number which will ultimately establish how billions in taxpayer money will be spent -- and it is one which is the subject of heated debate, both among politicians and scientists.

When the next report from the United Nations Intergovernmental Panel on Climate Change (IPCC) is issued in two years, it will include a forecast for how high the world's oceans might rise by 2100. With 146 million people in the world currently living less than one meter above sea level, the forecast will be vital in determining how much money governments must spend on measures to protect people from the rising waters and to resettle those in the most acute danger.

Eighteen scientists from 10 countries are involved in the task, and their first step is to determine which of the myriad studies relating to climate change's effect on ocean levels to consider. In the end, they are to establish a possible range, with the maximum being the most decisive -- and most contested -- number. Even more challenging, the estimates currently differ by almost five meters (16.5 feet).

The last IPCC report, which was issued in 2007, forecast an ocean level rise of up to 59 centimeters by the end of the century. Now, the UN experts must once again sift through hundreds of reports, and the haggling over their findings is not unlike the bargaining for the best price at the bazaar. On the one hand, researchers have published forecasts that are far higher than the result reported in the last IPCC report. On the other, sea level measurements have yet to prove any meaningful rise though there is agreement that they are, on global average, rising.

In recent days, the debate over the IPCC forecast has heated up. Some 4,000 experts gathered in Melbourne, Australia last week for a meeting of the International Union of Geodesy and Geophysics (IUGG). And it seems almost as though they are in competition to outdo one-another's predictions.

NASA climate researcher James Hansen, for example, warns in a paper published this month that sea levels could rise by five meters in the next 90 years -- nine times higher than the maximum cited in the last IPCC report. He insists that he has found indications that sea levels in the future could rise by as much as five centimeters per year.

Hansen, say some climatologists, is risking his reputation with such an extreme forecast. Three years ago, researchers found that a rise of over two meters per century is impossible because so much ice simply can't melt in such a short time. Furthermore, current measurements show a rise of just three millimeters per year.

An additional recent study, written by Jim Houston from the Engineer Research Center in Vicksburg, Mississippi and Bob Dean from the University of Florida in Gainsville for the Journal of Coastal Research, argues that sea levels have risen steadily for the last 100 years -- and that there has been no acceleration at all in recent years.

A reply was not long in coming. In the current issue of the Journal of Coastal Research, Stefan Rahmstorf, from the Potsdam Institute for Climate Impact Research argues that Houston and Dean only included sea level calculations beginning in the 1930s. He says that if one chooses a year from the previous century, an accelerated rise can be seen.

Rahmstorf is not alone in his belief that the sea level rise has accelerated. Data up until 1993, based on coastal measurements, show an annual rise of 1.7 millimeters. Since then, however, satellite measurements have indicated a rise of three millimeters per year.

But does that mean that water levels are rising faster? Not necessarily. Certainly the rate of increase has strengthened during the 20th century, said John Church of the Commonwealth Scientific and Industrial Research Organisation (CSIRO) in Australia. "Whether or not this is a further acceleration is not yet clear," said Church, who also leads the sea level working group at the IPCC.

The quality of the data is not enough to reach a clear conclusion, says Eduardo Zorita, from the Helmholtz-Zentrum Geesthacht Centre for Meterials and Coastal Research. In the last eight years, he says, the rise of the oceans has slowed -- and what the future may hold is uncertain.

While some researchers see an unusual acceleration over the last few decades, Simon Holgate, a sea level researcher with the National Oceanography Centre in Liverpool, does not. According to his study the rates of increase since 1993 have been nothing out of the ordinary. Indeed, says Guy Wöppelmann of the Université de La Rochelle in France, in the 20th century sea levels have risen with similar speed only to slow down again.

Still, studies have shown that the thick layer of ice on Greenland has begun melting faster. And that massive amount of water has to go somewhere. The 2007 IPCC report avoided the most pessimistic scenarios for the melting ice on Greenland, primarily because so little is known about the ice sheet there.

"Without a better understanding of how the great ice sheets of Greenland and Antarctica will react to warming air and warming oceans, we simply cannot say" what the future might hold, says Josh Willis, an ocean researcher at NASA's Jet Propulsion Laboratory.

Nevertheless, the accelerated melting of the ice sheet would indicate that the IPCC report from 2007 may have underestimated its impact on sea levels. But to what degree?

Data from earlier warm periods do not provide cause for optimism. A study published by a team led by Anton Eisenhauer at the Leibniz Institute of Marine Sciences two years ago found that coral reefs that are six meters above sea level today were under water 125,000 years ago. Sea levels must have been much higher at the time. And the climate was much warmer than it is today. Eisenhauer believes that melting Greenland glaciers may have been to blame.

The scientists are in a dilemma: There are reasons to believe that the melting of the Greenland ice could speed up dramatically, but they won't have proof for decades to come. As such, researchers are attempting to use data from the past to make predictions as to what might happen in the future. So-called "semi-empirical studies" seek to find a connection between the air temperature and the ocean levels.

Using such global temperature data since 1880, Martin Vermeer from the Helsinki University of Technology, together with Rahmstorf, came to the conclusion that global sea levels could rise by 1.9 meters by the year 2100.

To what degree such studies might be accounted for in the new UN report is open to question. Their results could make for a much higher UN forecast when it comes to future ocean levels. And many researchers have their doubts. "The semi-empirical models have not been verified," says, for example, Neil White from CSIRO, adding it is unclear whether such comparisons reflect real occurences in nature. "In some circumstances," he adds, they "have been shown not to work."

Arriving at a forecast is made even more difficult by the fact that sea levels do not rise at the same rate across the globe. In some regions, it is rising at double the average," says Claus Böning from the Leibniz Institute. "Elsewhere, levels are even sinking, for example at some Pacific islands and in the Indian Ocean." Ocean currents are largely responsible for these differences, he and colleague Franziska Schwarzkopf recently reported in the journal Geophysical Research Letters.

Research until now has been based on the assumption that three factors affect the rise of ocean levels equally: the expansion of the warming water, the melting of mountain glaciers and the melting of the Greenland ice sheet and the polar ice caps. But now, says David Bahr from Regis University in Denver, it is vital to intensify research into those glaciers in Greenland which stick out into the ocean. They are threatening to collapse.

Disagreements Over What to Expect

In addition, the melting of ice in the western Antarctic needs to be better understood. During the last warm period 120,000 years ago, when it was roughly 2 degrees Celsius warmer than today, the Antarctic ice cap did not completely melt, according to a recent study in the journal Palaeogeography, Palaeoclimatology, Palaeoecology.

"Without a better understanding of how the great ice sheets of Greenland and Antarctica will react to warming air and warming oceans, we simply cannot say" what will happen in the future, said Josh Willis, an ocean researcher at NASA's Jet Propulsion Laboratory.

As a result, researchers don't agree on what to expect. Whereas James Hansen expects a five meter rise, his colleague Simon Holgate says that "I think that even in the highest emission scenario we won't exceed a global average of one meter of sea level rise by 2100."

Given the large discrepancies in expert opinions it would appear that the 18 scientists currently working to arrive at a forecast have their work cut out for them. And unlike the glaciers on Greenland, they cannot work at a snail's pace. After all, one of the most important numbers in the next IPCC report is at stake.

Correction: In a previous version of this article researcher Simon Holgate was mistakenly quoted in false context. Holgate is, in fact, not of the opinion that measuring tools could have shown an erroneous acceleration in sea levels. It is unclear whether it has risen at a higher rate or not in recent years, he said. 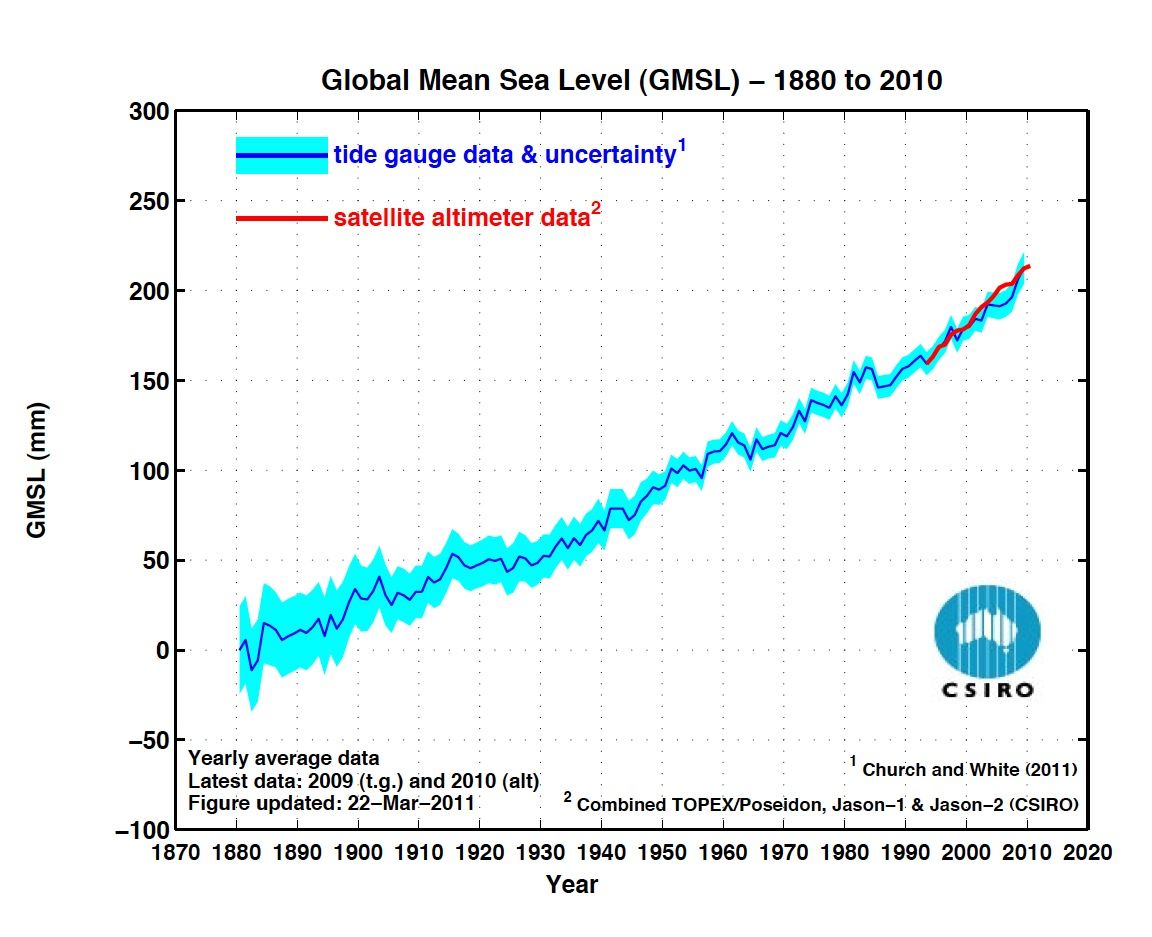 Since 1880, sea levels on average have risen approximately 20 centimeters. Until 1993, data was gathered via coastal measurements. Since then, satellite data has been used. Researchers are debating whether the sea level rise has accelerated since then.