In Soviet times, former US Secretary of State Condoleezza Rice once said, a visit to Moscow had to include three stops: the Kremlin, the Bolshoi Theater and Lenin's mausoleum on Red Square. She went on to say that, once the Soviets fell, the first two remained requirements. But the third item on the itinerary had changed. Instead of viewing the dead revolutionary's wax mummy, American delegations preferred to stop by the decidedly lively offices of the radio station Echo of Moscow.

The news broadcaster was founded in 1990 and has since made a name for itself with its independent news and analysis as well as for its pointed critique of the Kremlin. In the morning, star columnist Anton Orech takes aim at the Russian leadership, while in the evening, sharp-tongued journalist Julia Latynina resumes her broadsides against Russian Prime Minister Vladimir Putin. And hundreds of thousands of people listen attentively.

Echo of Moscow's offices are located inside a dismal, concrete hulk of a building not far from the Kremlin. In the two decades of its existence, it has become the most important voice of new Russia and reaches some 3 million listeners across the country. Historian Nikolai Svanidze, author of a biography of President Dmitry Medvedev, calls the station a "flagship of quality journalism."

The question is how long it will stay that way. The Kremlin has upped the pressure on Echo of Moscow, with a subsidiary of the partly state-owned natural gas company Gazprom seeking to take over a majority of the station's supervisory board. Echo of Moscow Editor-in-Chief Alexei Venediktov is calling the move "an attempt to correct editorial policy." The move, he says, is not an initiative of Gazprom itself, rather it comes from the "highest echelons of the political establishment."

Venediktov himself along with two other Echo of Moscow editors are currently members of the supervisory board. Together with two independent members, they act as a counterweight to the four Gazprom directors who are likewise on the board. That, though, is soon to change. Gazprom Media Holding, which owns 66 percent of Echo of Moscow shares, is demanding that it receive six of the nine board seats in the future. The reason, says Nikolai Senkevich, general director of Gazprom Media, is the "increased attention being paid to the radio station by various sides."

It is more attention than Venediktov is likely comfortable with, particularly from the Kremlin. When Echo of Moscow, on the day of the controversial parliamentary elections early last December, reported on incidents of voter fraud that benefited the Kremlin party United Russia, unknown hackers attacked the station's website.

Furthermore, during a meeting of top editors in Moscow, Putin personally lodged a complaint with Venediktov. Putin claimed to have recently tuned into the station only to hear "nothing but nonsense." He said the station was "pouring shit over me from morning till evening." He also said that, in the conflict between Russia and the US over Washington's plans to install a missile shield in Europe, Echo of Moscow was voluntarily "serving the interests of a foreign country."

Three weeks before presidential elections set to be held in early March, the attacks on the station have heightened concerns about state censorship. Putin, who is far ahead in the polls, has promised in his campaign to create a Russian equivalent of Hyde Park. He says a dignified place must be found where everyone can publicly express his or her opinion.

But at the same time, he has directed the Kremlin to exert stronger controls over critical media outlets. In mid-December, the editor-in-chief of the magazine Kommersant Vlast was forced to step down following a report over electoral fraud. Then, at the beginning of this week, it was revealed that the Russian branch of MTV cancelled the show of society star Kseniya Sobchak. Often called the Paris Hilton of Russia, Sobchak had joined Kremlin opponents during a mass demonstration and wanted to invite the Putin-critical blogger Alexei Navalny onto her program.

Echo of Moscow's success as a critical voice is one of the anomalies in Putin's new Russia, a country that fails to live up to Western standards of democracy while at the same time falling short of a China-style dictatorship.

The Gazprom subsidiary has held two-thirds ownership in Echo of Moscow for 10 years now, with the other third belonging to station employees. Yet in that time, the station has not watered down its coverage of the Kremlin. Indeed, Boris Berezovsky, the Putin-critical oligarch who fled Russia a decade ago to escape charges of economic crimes and who was granted political asylum in the United Kingdom, still makes appearances on the station.

Editor-in-Chief Venediktov once said in an interview that his "political stockholder" sits in the Kremlin. Thus far, though, it is a stockholder who has preferred to remain silent. Venediktov has a trio of possible explanations for why this is so. First, he says, the Kremlin can point to Echo of Moscow whenever countries in the West criticize press freedoms in Russia. Second, even as the station is held in high regard by the country's intelligentsia, it has little influence over the voting masses.

And finally, the Kremlin needs an independent source to provide them with unfiltered news about the country. Echo of Moscow, says Venediktov, broadcasts stories "that can't be found in the red folders marked 'Top Secret.'"

Despite the changing power structures in the supervisory board, Venediktov's job is not in danger. He was elected to his position by Echo of Moscow employees and to replace him, Gazprom would have to increase its share of ownership to 75 percent.

In the future, it will be up to executive editor Yuri Fedutinov to defend the station's editorial independence on the supervisory board. He's not alone in thinking it will be a difficult task. The recent attacks, he said, are just the first steps "at the beginning of the path." 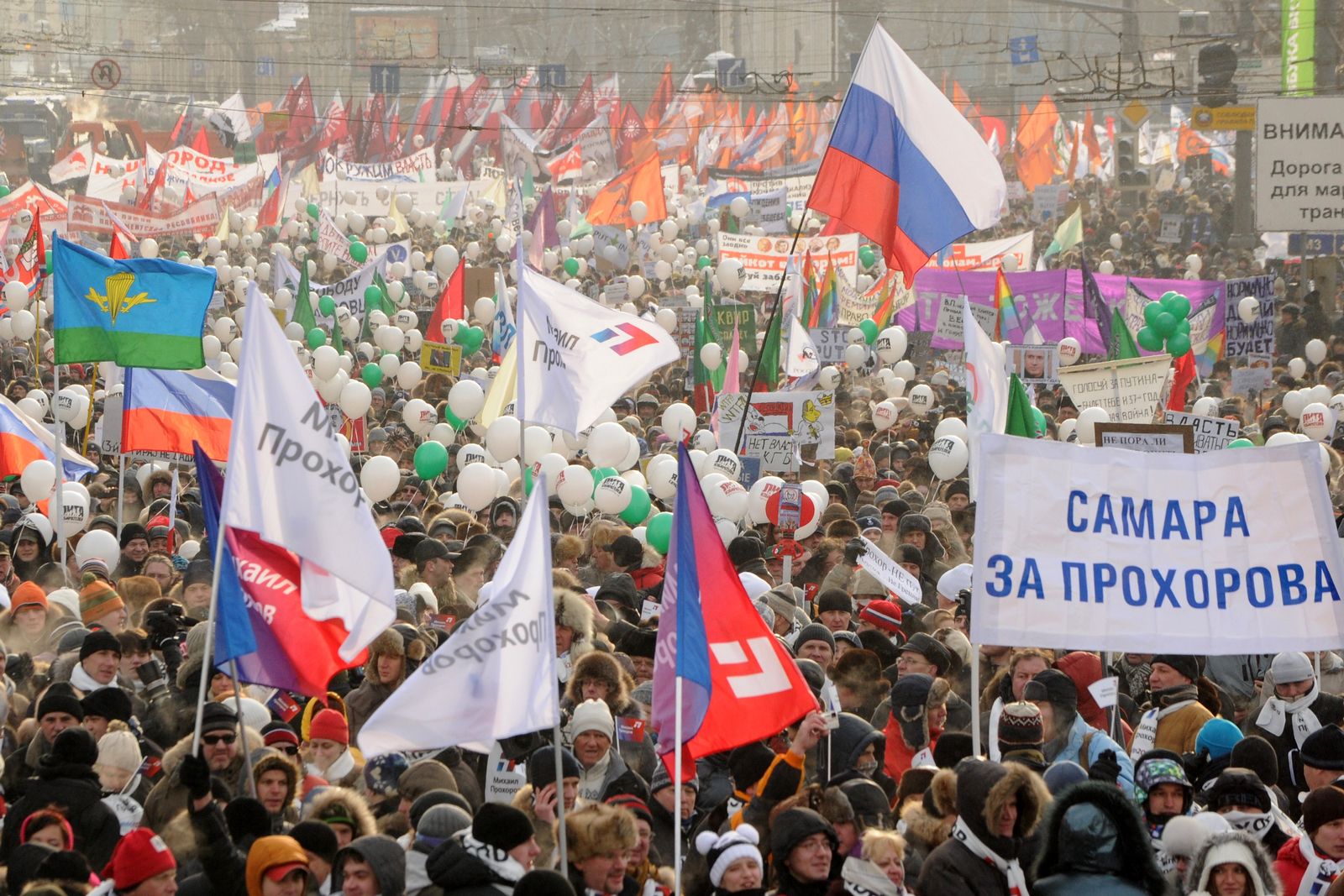 An anti-Putin demonstration in Moscow in early February.