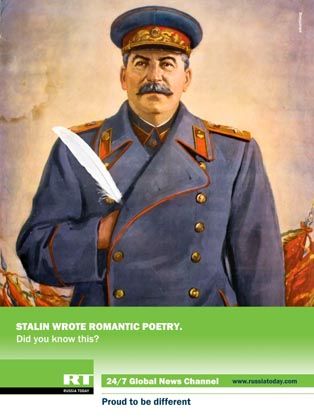 There are probably better ways of promoting a country's image abroad than running an ad campaign in English-language newspapers peddling the softer side of a man whose repressive policies led to the deaths of millions. Under the slogan "proud to be different," Russian state propaganda channel Russia Today (RT) has recently been running full-page ads featuring Soviet dictator Josef Stalin in a general's uniform, armed with a quill in hand. "Stalin wrote romantic poetry," the ad states. "Did you know that?"

It's about as subtle a message as a scenario in which German international broadcaster Deutsche Welle were to advertise with Hitler and the question: "Did you know that Adolf Hilter also painted?"

RT, which has about 700 employees and whose signal can be received in about 100 countries, went on the air in April 2005 and broadcasts in English and Arabic.

Its creator, Michail Lessin, the 49-year-old former press minister and current media advisor to President Vladimir Putin, wanted to establish a news channel that would counter CNN and BBC -- with a Moscow spin.

"It's been a long time since I was scared by the word propaganda," Lessin says. "We need to promote Russia internationally. Otherwise, we'd just look like roaring bears on the prowl."

The station's editor in chief, Margarita Simonjan, 27, adds: "We knew that the Stalin theme would be ambivalent in the eyes of many," she says. "But it fulfilled its purpose wonderfully. The number of visitors to our Web site has doubled."