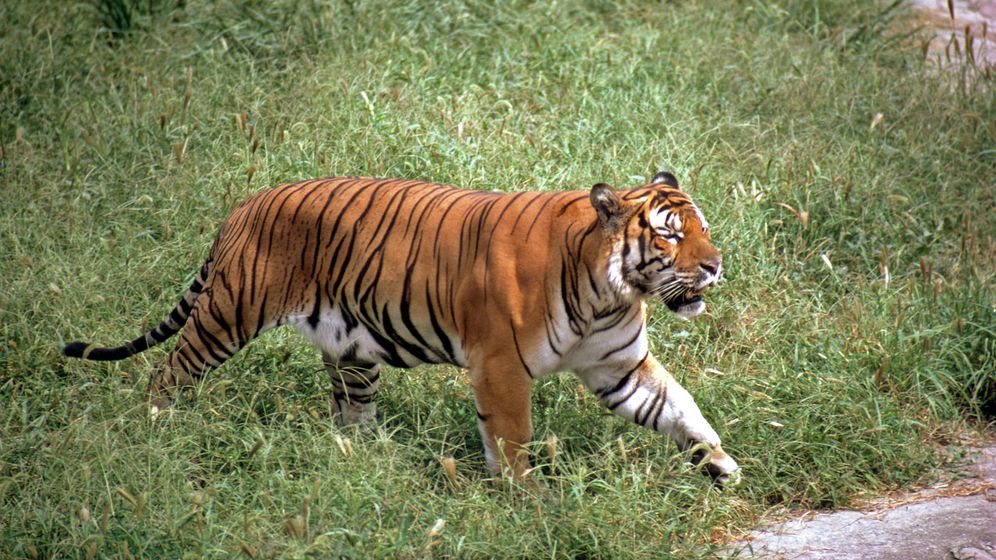 The group dressed in blue had arranged themselves in a row before Berlin's Brandenburg Gate. In front of each of the activists was a large photo of an animal species now extinct: an aurochs, a Chinese river dolphin, an ivory-billed woodpecker. In the background fluttered a banner reading "stop extinction," a couple of candles had been set up, some flowers and a few stuffed animals. A photogenic protest that was accompanied by mournful trumpet music.

The small demonstration was put on last Thursday by Germany's Nature and Biodiversity Conservation Union, just one of the myriad environmentalist groups around the world warming up for the summit on the Convention on Biological Diversity which begins in Nagoya, Japan on Monday. They say that pressure from the public is badly needed -- because even as the 11-day conference gets underway, its chances for success appear to be slim.

As with the international climate negotiations which ended in fiasco last year in Copenhagen, the biodiversity talks in Nagoya could well end in political stalemate -- as the situation in numerous ecosystems around the world gets worse and worse. Already, 20 percent of the planet's 380,000 plant species are in danger of becoming extinct, primarily due to habitat destruction caused by the world's growing population. Of 5,490 species of mammals, 1,130 are threatened and 70 percent of the world's fish population is in danger from over-fishing.

It is a list of failures that the international community had hoped to avoid. In 2002, the world agreed to take the growing wave of extinctions seriously using the 1992 Biodiversity Convention as a framework. The treaty calls for the protection of biodiversity, the sustainable use of natural resources and the fair distribution of profits made from the harvest of genetic resources. Eight years ago, the international community set a series of non-binding targets for the protection of biodiversity. The idea was to take regional, national and international action to decisively slow the rate of species loss.

But the goals were not met. Nagoya will now mark the end of this regrettable process. It is "obvious that the world community has failed to meet this target," said Jochen Flasbarth, head of Germany's Federal Environment Agency and current president of the Convention on Biological Diversity. At the summit in Japan, to be attended by representatives from 190 countries, Flasbarth will be handing his office over to a Japanese colleague.

Tokyo has been in diplomatic overdrive during the last several weeks in a last-ditch effort to avoid seeing the negotiations end in Copenhagen-style failure. "Governments need to take conservation of biodiversity seriously this time around," Leon Bennun, an ornithologist with BirdLife International in Cambridge, told the Inside Science News Service last week. "We cannot fail again."

The international community aims at setting new goals -- there is a total of 20 concrete targets mentioned in the text under negotiation. The convention also aims to agree on a strategy ensuring that the goals are met by 2020. Environmentalists have praised the good intentions the document contains, but several of the passages remain in brackets, an unmistakable indication that the text is the subject of heated international debate.

Still, the negotiations aren't quite as difficult as those surrounding global warming. For one, nobody seriously denies that the loss of biodiversity is a problem. For another, negotiations on the subject tend not to be laden with the kind of emotion many bring to the climate change table. The danger of a loss of face for conference-goers appears to be smaller.

But the summit is overshadowed by the urgent need for action. A research team led by Charles Perrings of Arizona State University argued in the journal Science last week that the first concrete measures for the protection of biodiversity had to be in place well before 2020. The article said that problems such as over-fishing, water pollution and the introduction of alien species into sensitive ecosystems urgently needed to be addressed.

According to the environment committee in the European Parliament, some €3 billion is spent each year on protecting biodiversity. That, say those involved, won't be nearly enough in the future. Indeed, Nagoya, like the Copenhagen climate talks before it, is primarily about money. Brazil, for example, has proposed a hundred-fold increase in the amount of money designated for biodiversity -- and suggests that the conference will fail should such a goal not be met.

This may just be the kind of saber rattling one often sees at international conferences. But the biodiversity meeting could fail for another reason as well. After 20 years of discussion, the meeting is to finally see an agreement meant to combat bio-piracy. The ABS Protocol (referring to "Access and Benefit Sharing" of genetic source material) is to ensure that wealthier countries do not simply exploit the genetic resources of poorer countries.

For a long time, it looked like the ABS Protocol would be signed in Nagoya. "The southern countries rich in bio-diversity should be sure that they get a share of profits from the commercial use of their genetic resources," German Chancellor Angela Merkel has said. This means that, for example, pharmaceutical companies searching in the Amazon rainforest for substances that could help combat cancer would have to pay a fair price for anything they find.

But even now, with the Nagoya conference getting started, it isn't clear if the ABS Protocol would be agreed on. "A central point of conflict is the demand by southern nations for payment based on past profits," Carsten Nesshöver, a geo-ecologist at the Helmholtz Centre for Environmental Research in Leipzig, told SPIEGEL ONLINE. In other words, industrialized nations would be forced to pay for past sins, in some cases back to colonial times. It is difficult to imagine diplomats from rich countries agreeing to such a treaty.

Should the ABS protocol not be signed, the summit could end up being seen as a complete failure. "In Nagoya, we will be developing a framework for how we live in the future," Beate Jessel, the head of the Federal Agency for Nature Conservation said.

Disinterest from the US

Jörg-Andreas Krüger, the deputy head of Germany's Nature and Biodiversity Conservation Union (NABU) is optimistic. "The conference won't end in a crashing failure," he told SPIEGEL ONLINE. Still, he declined to offer any forecasts as to what success might look like.

For one, international leadership is lacking. And the United States, as during the climate negotiations in Copenhagen, is not playing a productive role. Indeed, although the US has signed the convention, it has not ratified it -- joining the Vatican and Andorra as the only three countries in the world not to have done so. "The US is more part of the problem than part of the solution," says Krüger.

Might the US ratify the convention soon? Flasbarth doesn't think so. "In the negotiations in recent years, I haven't got the impression that it enjoys a high priority within the Obama administration," he said.