This is Rosa Feltmann's story. She has four children, two of her own and two that came with her boyfriend. Both work for the Danish railways. They met five years ago, when Feltmann returned to Copenhagen after 11 years in Greece, where she'd been working as a stripper. "But when I turned 29," she says, "I decided it was time to stop all that and do something else."

Feltmann started stripping when she was 18. She got the job after seeing an ad looking for young women who wanted to earn lots of tax-free money. So, she ended up in a bar in Thessaloniki working as a topless waitress. "But I didn't mind because I don't really have much of a bosom," she says. Feltmann learned how to speak Greek and then how to strip because, as she explains, she would rather be looked at than groped. She earned good money, working in various bars and never giving much thought to the future. Then one day, she remembers, she woke up and thought: "I'm going to be 30 in a year!" 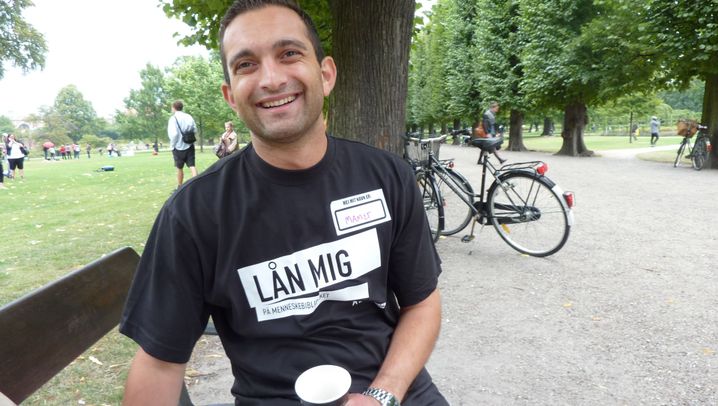 So, instead of going to work at the strip bar, she caught a plane back to Copenhagen. And that's why Feltmann was sitting on a stage in King's Park in central Copenhagen last weekend, wearing a black T-shirt that read "Lend Me Out." But that's not all. "My ass is all over Copenhagen," Feltmann notes. Indeed, there is a poster in town featuring Feltmann's posterior -- she's wearing high heels and standing between a punk with bright red hair and a Muslim woman in a headscarf and ankle-length dress. Welcome to Denmark! And welcome to the Living Library!

Disarming People of Their Prejudices

"It all started with the violence," says Ronni Abergel, 36. The son of a Moroccan and a Dane, Abergel studies journalism at Odense University. But after a friend was stabbed in 1993, Abergel and four other friends founded an organization, Stop The Violence, focusing on interracial violence. Since then, Abergel has become more of an activist, lecturing on conflict resolution at schools and organizing concerts. In fact, he spends so much time organizing political activities that he isn't sure when he'll be able to complete his media studies.

The idea for the Living Library came about in 2000 when the organizer of the Roskilde Festival, one of Europe's largest summer pop and rock concerts, asked Abergel's group to come up with an activity that could be held during his event. Face-to-face dialogue seemed to be the key to understanding, so the idea was to have people hear the life stories of others they might have formerly harbored preconceptions about. The motto: Don't judge a book by its cover. "We want to disarm people, we want to help fight prejudices," Abergel says. "When they talk to one another, they re-think their own positions."

Last weekend, Feltmann, the former stripper, was one of around 55 "human books" that could be loaned from the Living Library in Copenhagen. The event was being held in the park, entry was free and anyone who wanted to hear the talking autobiographies only had to put their name on a list. It was mostly children and teenagers who were interested in hearing the life stories of an assortment of people, including Feltmann, a Muslim woman, a hip-hop artist, a member of Alcoholics Anonymous and a gay Jew. They wanted to know how these people live and how their lives have changed -- or how they'd like to change their lives.

Feltmann was a particularly "well-read" human book, and her "borrower" changed every half hour. But Mamet's audience needed a little more time. He was born 29 years ago in Iran and came to Denmark as a 6-year-old, together with his mother and two siblings. For the first three months, his family lived in a container ship before spending several more months in a refugee camp.

Mamet is a Persian, a Muslim, a refugee -- and a real estate agent. In Danish gradeschool, he was smaller than his classmates, who used to bully him and shove him into garbage cans. But success has been the sweetest revenge for Mamet. Last year, he bought a 50 percent share in a large real estate firm, and he's hoping to buy the other half in the future. He works 80-hour weeks, and any spare time he does have is spent with his family. His son, Elias, was born three weeks ago, and he calls his Danish wife "hunny bunny."

Mamet's biggest role model is his mother. As soon as they were able to leave the refugee camp, she began studying to become a dentist. She remarried, had two more children and continued to work as a dentist. "When we came to Denmark, we had nothing," Mamet says. "Only our wits." And, of course, the drive to succeed.

Compared to those of Mamet and Feltmann, the stories told by Peter Nim, 46, were not quite as exotic. He studied elderly care, but he eventually joined the police force when he was 24. Now he teaches cadets at the Danish Police Academy in Copenhagen. And, if you had to be arrested, Nim is exactly the kind of policeman you would want doing it, as he is kind, sociable and talkative.

Nim says he's not afraid of going into Christiana -- the world-famous Copenhagen neighborhood that has declared itself autonomous after squatters took over and that has become notorious for its open trade in marijuana and anti-authority riots -- but he just doesn't feel the need to go there, not even in civilian clothes.

Instead, Nim regularly patrols Nörrebro, a troubled area on the edge of downtown Copenhagen's inner city that has experienced a recent surge in violent crime, where a lot of immigrants from the Middle East live. Nim calls them "ethnic people," without going into further details.

Almost all of the people who live in Nörrebro are perfectly fine, Nim says. It's only a a half of a percent that cause problems and, of that, there's a hard core of around 50 to 70 people. So, why don't the majority keep that wrong-doing minority in check? Why do thousands of upstanding migrants let themselves be terrorized by a couple of gangs? "Because they're afraid," Nim explains. "And because the gangs eliminate anyone who stands in their way or reports on them."

As far as Nim is concerned, you can't really do much to stop the gangs. You can only try and stop them from recruiting young people off their own streets. The government and the city council are pumping millions into "hundreds of projects" in Nörrebro to try and give young people there alternatives to gang life, everything from sports activities to opportunities for further education for those who left school early.

Nim admits that gang activity is not decreasing. Still, he is happy enough if they don't expand their criminal activities. And should they fight amongst themselves, as they have a habit of doing, the police tend to look the other way. "What can we do?" Nim asks. "We can't just throw them out of Denmark. If we did that, we'd have Amnesty International or Human Rights Watch taking us to the European Court of Human Rights."

It's for these reasons that Nim says he volunteers -- in uniform -- to be a part of the Living Library project. He's hoping to run into some kids from Nörrebro and convince them that "the life of a gangster or drug dealer isn't a good choice."