Clemens Wendtner treated some of Germany’s very first COVID-19 cases, back before the disease even carried that name. The head physician in the Department of Infectiology and Tropical Medicine at the Munich-Schwabing Clinic knows what is coming his way if the number of infected people in Germany rises as steeply as it did in Italy. "I think, in that case, we could really use an effective medication,” he says.

Because of his experience with the disease, his clinic will be the first in Germany to test remdesivir, a drug initially developed for the treatment of Ebola, on coronavirus patients. The university hospitals in Hamburg and Düsseldorf are also eager to participate in the clinical study by the American pharmaceutical company Gilead Sciences. Remdesivir inhibits the replication of the genetic material of so-called RNA viruses, which include the pathogen behind Ebola and the new coronavirus.

Ever since an American coronavirus patient recovered overnight after being given remdesivir, the medication has been seen as a possible silver bullet for the pandemic.

Two large studies on remdesivir in China have been running since February, with initial results expected in late April. A study has also been launched at the University of Nebraska Medical Center in Omaha, in the U.S. According to the head of the study, Andre Kalil, up to 40 other sites are set to join that project in the U.S. alone. The U.S. Defense Department has already made remdesivir available to soldiers and civilian employees as part of its own study.

"Things could get going as early as April with us as well,” says Wendtner, the Munich doctor. According to Stefan Schmiedel, the responsible head physician in Hamburg, the tests there could even start in just a few days.

At the moment, remdesivir is the greatest hope in the treatment of COVID-19, but it is not the only one. Pharmaceutical researchers working hard to rapidly identify agents that could help in the fight against coronavirus.

Around 85 studies on COVID-19 patients are currently listed at clinicaltrials.gov, an international study register. They include substances like thalidomide, notorious for the birth defects it caused after being widely prescribed in West Germany as a sleeping aid in the late 1950s, and esoteric-seeming approaches such as stem cells from the inside of teeth and traditional Chinese medicine. Reports have emerged that the numerous studies have even begun vying against each other to secure patients for their trials.

In order to help provide some structure in the search for an effective drug, the World Health Organization (WHO) began assessing which agents they see as most promising in January. Now the British Wellcome Trust, the Bill & Melinda Gates Foundation and the Mastercard Impact Fund have launched the COVID-19 Therapeutics Accelerator, with $125 million in start-up financing. Its goal is to support and coordinate research into promising medication, support approvals and make the new medication available in impoverished countries, all in collaboration with the WHO.

"Science is moving at a phenomenal pace against COVID-19,” says Jeremy Farrar, the director of the Wellcome Trust. But, he adds, COVID-19 is an extremely challenging virus.” For this reason, he argues, a lot of money will need to be invested in order to get the pandemic under control.

"We need to be prepared. It's a race against time."

Andre Kalil, leader of a study at the University of Nebraska

It is now becoming painfully clear that numerous opportunities have been squandered in recent years. Matthias Götte, a biochemist and viral researcher from Hamburg who is currently conducting experiments on remdesivir at the University of Alberta in Canada, argues that significant progress has been made when it comes to antiviral medication in the past 25 years. But, he says, this hasn’t included medication against coronaviruses. "But after the SARS epidemic,” he says, "we could and should have done that.”

Now researchers need to make up for lost time as quickly as possible. Luckily, a perfect cure isn’t strictly necessary. As the situation in China has shown, about 3 to 4 percent of patients need to be artificially respirated during the infection. The mortality rate goes up quickly when there aren’t enough artificial respirators available. Even if a medication doesn’t cure patients overnight, one that would make respirators unnecessary for some of these 3 to 4 percent would save many lives.

At the moment, doctors are using a treatment similar to the one used during the 2003 SARS epidemic. It involves treating COVID-19 patients with a combination of the HIV/AIDS medications lopinavir and ritonavir as well as an immune modulator called interferon. There is still no proof that these methods are effective against the new coronavirus, says Götte, and he himself is rather skeptical: "Lopinavir is very good at inhibiting the so-called protease enzyme of AIDS viruses,” he says. "But the coronavirus protease is different.” He argues that the medication may not function optimally against the new virus.

Lab experiments also suggest that there will not be one perfect medication against COVID-19. Based on an experiment with rhesus monkeys, the experimental Ebola medication remdesivir, for example, works best against the COVID-19 virus if it is used prophylactically or at the beginning of an infection. In a complex pandemic situation, that is hardly possible for many cases.

Remdesivir also needs to be given intravenously, which might limit it to high-risk groups. "One will need to look very closely at the results of the various patient studies,” says Götte, "in order to be able to evaluate who will actually be able to profit from the medication.”

Hopes have also been pinned on another medication: chloroquine, a decades-old anti-malaria drug. Unlike remdesivir, it is already approved, cheap to manufacture and has another great advantage - its safety profile is well known, including as a prophylaxis. Millions of people travelling to Africa have taken itf for weeks at a time.

It has been known for quite some time that chloroquine can stop human cells from being penetrated by viruses. An experimental study currently taking place China could prove that the drug – and especially its relative, hydroxychloroquine – can inhibit the propagation of SARS CoV-2, the virus that causes COVID-19.

Four chloroquine studies with COVID-19 patients have now been added to the international study register. It is to be tested a as a possible prophylaxis for people who have contact with infected patients and for hospital workers.

Another promising medication comes from Germany. Researchers at the German Primate Center in the central German city of Göttingen and at Berlin’s Charité Hospital have discovered that camostate mesilate, a medication for the treatment of pancreatitis approved in Japan, can stop the new coronavirus from invading cells.

"We already knew that other coronaviruses are vulnerable at this position,” says Stefan Pöhlmann, head of the Infectious Biology Unit at the German Primate Center. "That’s why we were able to prove this so quickly.”

But he says that it remains unclear if it also works for COVID-19 patients. "It may not be available in sufficient amounts in the lungs,” says Pöhlmann. This now needs to be determined, he says.

Antibodies have been shown to be a particularly effective treatment against the Ebola virus, and various kinds of antibodies are now also being tested on COVID-19 patients, including some that were obtained from the blood of post-recovery patients.

Ultimately, Götte suspects that a combination of different antiviral medications will be necessary to successfully treat COVID-19 – if for no other reason than to prevent the development of resistances.

Thus far, three patients have been treated with remdesivir in a placebo-controlled study at the University of Nebraska’s medical center in Omaha. The patients and the administrators are not allowed to know which of the patients are receiving the medication. Kalil can say the following about the conditions of the coronavirus patients: "One of the three patients is already out of the hospital and back in quarantine. He improved very well. The second patient is making substantial improvements." The third is just starting the study.

"We need to be prepared," says Kalil. "It’s a race against time.” 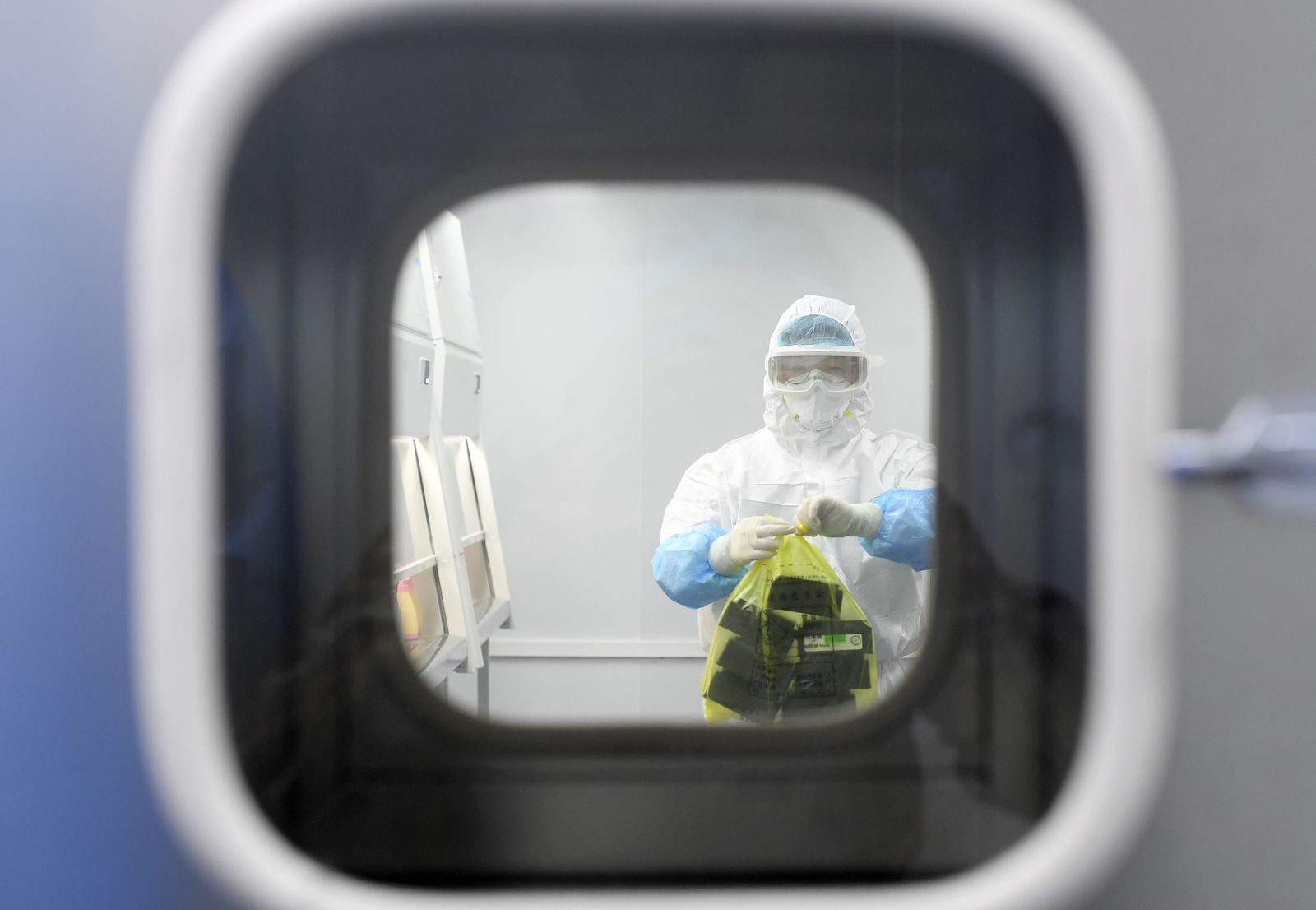 A worker examining specimens in a lab in China: "We could really use an effective medication."