More than 10,100 people. That is how many people in Italy have been infected by the novel coronavirus, according to numbers released by the World Health Organization (WHO) on Wednesday. It is the highest number outside of China. And it is by far the most of any country in Europe.

By way of comparison, France has the second-highest number of cases in Europe, with around 1,700 and Germany is in fourth with 1,300, behind Spain. And there is another number that pops off the page: 631. That is the number of people in Italy who have died thus far. That isn't just the highest number in Europe by far in absolute terms, it calculates to a death rate of 6 percent, which is unusually high.

In China, where there have been 81,000 infections thus far, according to WHO, the death rate is under 4 percent, and WHO has calculated a global rate of between 3 and 4 percent. That means that out of 100 people proven to be suffering from COVID-19, an average of three to four will die.

Why Is Italy Different?

The difference between the rate in Italy and the rate calculated by WHO may seem small. But if you apply the lower rate of 3.5 percent to the number of cases discovered in Italy thus far, it would mean 270 fewer deaths. The more people get infected, the greater the discrepancy in absolute numbers will become. What, then, makes the outbreak in Italy different?

Italy has been essentially cleared of tourists, with travel to and from the country severely limited.

Before we try to answer that question, it is important to make a crucial point: Experts assume that there is a huge number of cases out there that haven't yet been discovered. The real global death rate could actually be far lower than the numbers mentioned above. Virologists actually believe the number is closer to 0.7 percent or so.

There are, though, several possible reasons for the extremely high death rate among those confirmed to be infected with the coronavirus. One is the population's average age: Italy's is the oldest in Europe, with a median age of 46.3 years. Because it's a median, it means that half of the country's population is older than that. In Europe as a whole, the median age is 43.1 years. Logically enough, in older societies, there are more people suffering from pre-existing health problems and who are susceptible to severe symptoms.

On top of that is the fact that in Italy, the number of infections climbed extremely rapidly early on, much more quickly than in Germany or France. A mass spread of the virus is the biggest risk it currently poses. If too many people get sick all at the same time, there is a danger that not all critical cases can be appropriately treated in hospitals because of a shortage of resources.

That's why the focus in Germany is currently on slowing down the spread of the disease through measures such as social distancing, the cancellation of large events and much more assertive hygiene practices. The idea is to prevent exponential expansion (explained in detail here) of the kind that occurred in Italy. The rapidity of the spread has been a key reason why the Italian health-care system has struggled to keep up.

The numbers from the Chinese province of Hubei, where the epidemic got its start, seem to indicate the same thing. Of the 68,000 people in the region who have been infected with the virus, more than 3,000 have died -- a death rate of around 4.5 percent. One can assume that the hospitals there were also overwhelmed during the rapid spread of the outbreak in Wuhan. The situation has calmed significantly since.

But the rapid spread is continuing in Italy. In the last 24-hour period for which numbers have been released by WHO, there were almost 980 new cases. The high numbers are primarily the result of the virus having spent several weeks circulating more or less invisibly. The first three cases in the country were discovered in late January, including two Chinese tourists. They were isolated and all those they had come into contact with were tracked down. Shortly thereafter, Italy became one of the first countries in the world to put a stop to all flights to and from China.

It looked initially as though the outbreak was under control, but it wasn't. In the northern Italian province of Lombardy, the virus has apparently been secretly spreading via a different chain of infection. It remains unclear who brought the virus to the region, but there are a number of possibilities. Northern Italy is home to the country's economic epicenter and is also full of tourist sites. It hosts a lot of international visitors.

Experts believe such a thing could have happened anywhere. But there were also misunderstandings that gave the virus valuable time to continue spreading. The government and local hospitals were apparently not on the same page when it came to when people should be tested for coronavirus and when not.

The result was that, when a sick 38-year-old man visited his family doctor in mid-February before then making several visits to the local hospital, he wasn't tested for the virus because he hadn't been in China. During that time, he infected several people he came into contact with before finally being isolated, 36 hours later. He became known as "Patient Zero" in the Italian media.

Undiscovered cases are so dangerous because each person infected with coronavirus passes it along to an average of three other people. That results in a chain reaction: from three to nine to 81 to …. The higher the number gets, the more difficult it becomes to control the outbreak.

Furthermore, undiscovered cases distort the statistics. It is quite possible that the death rate in Italy is actually far below the value that has thus far been calculated because numerous cases with no or only mild symptoms haven't been discovered.

On Wednesday night, Italy isolated the entire country and placed limitations on travel and assemblies of large numbers of people. Apart from supermarkets and pharmacies, all shops and restaurants have been closed down. Christian Althaus, who models the spread of diseases at the University of Bern, told the Guardian that he considers the sealing off of regions hit hard by the disease to be the correct move. 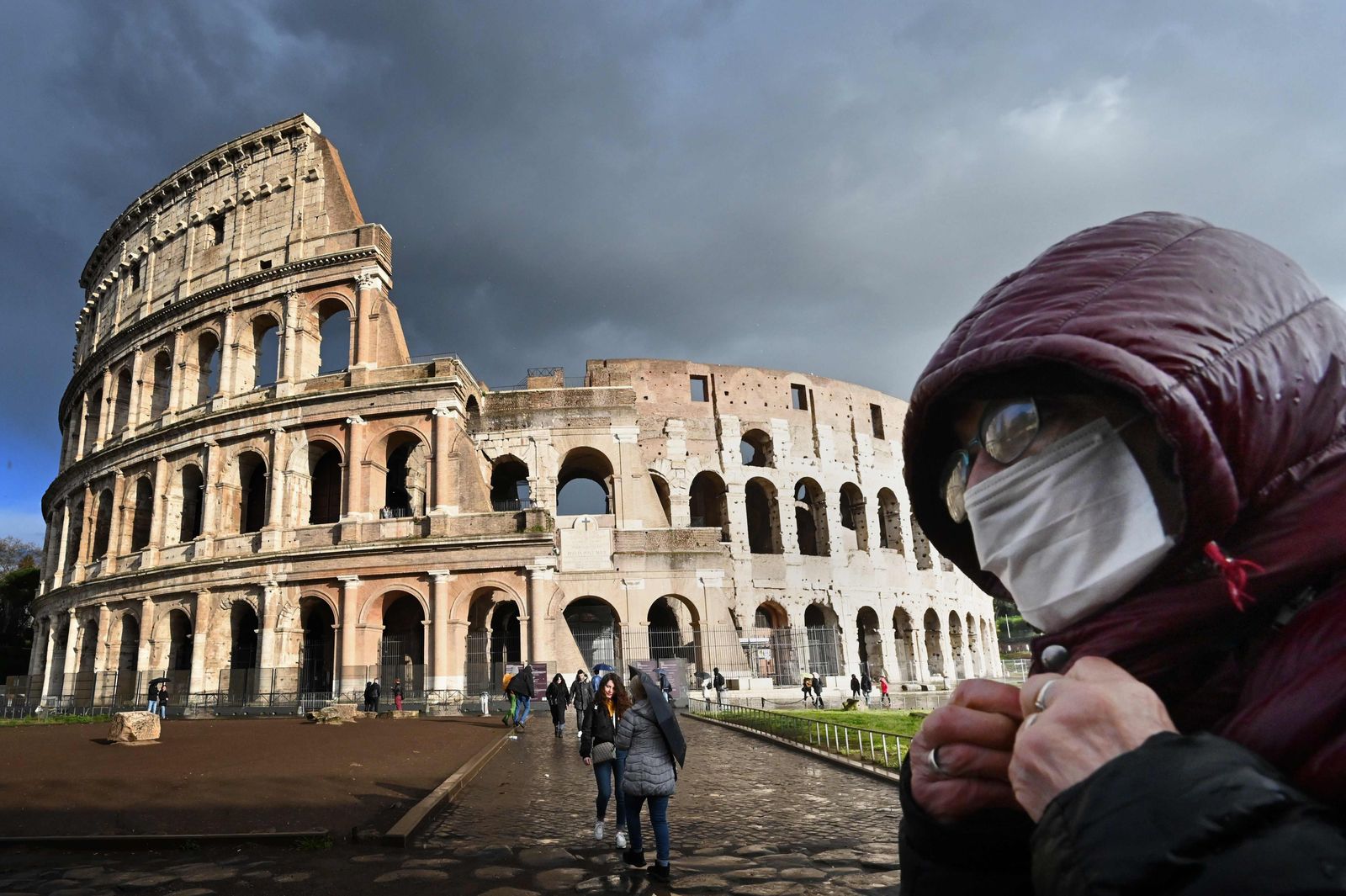 A man with a face mask in front of the Colosseum in Rome. 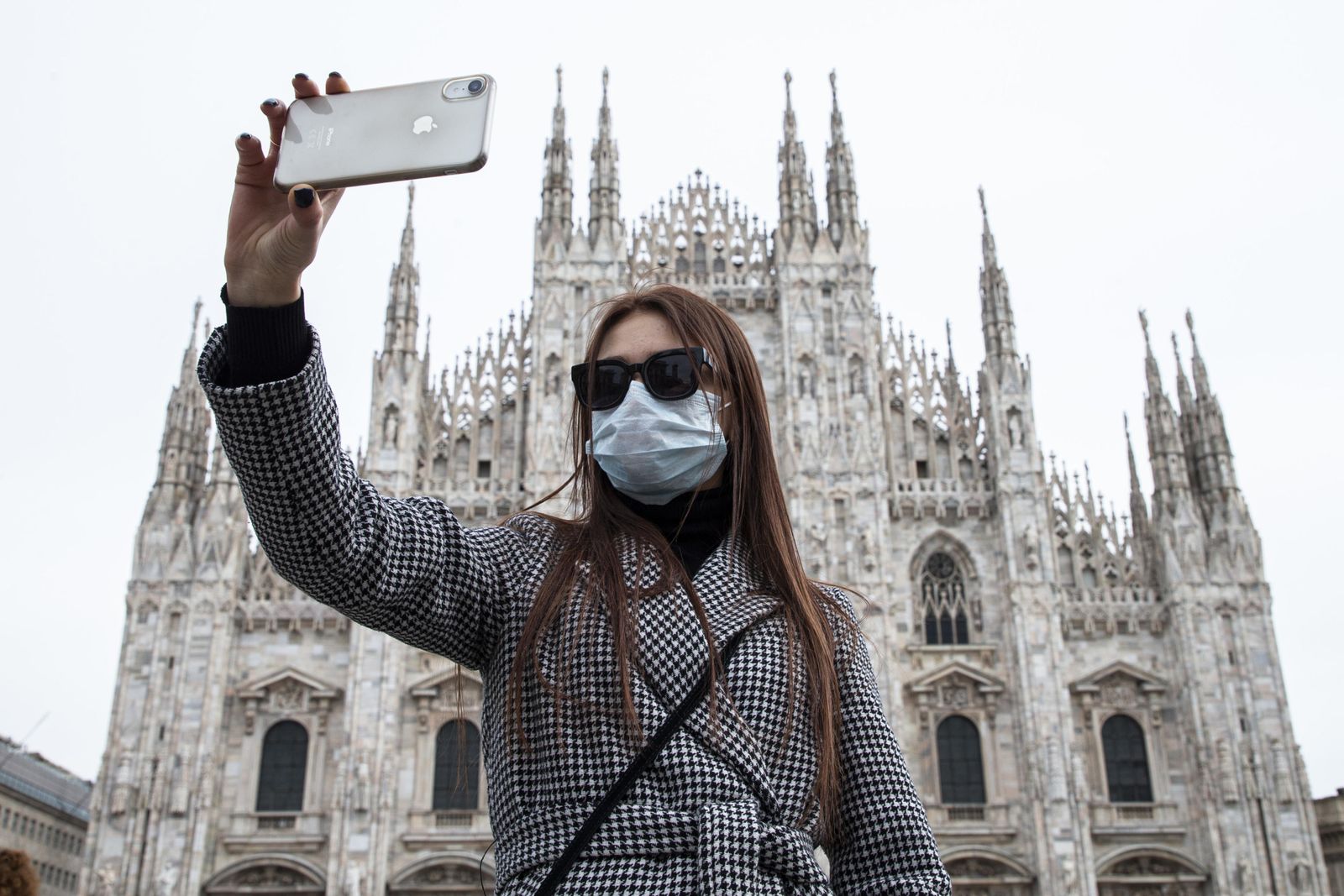 Italy has been essentially cleared of tourists, with travel to and from the country severely limited.