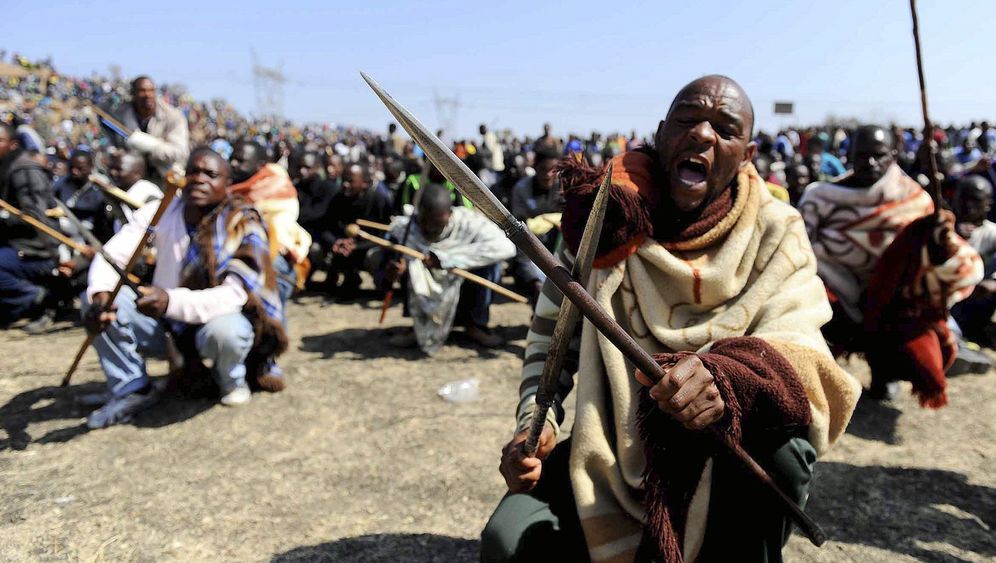 Photo Gallery: The Marikana Massacre and the ANC

He was still a child 18 years ago, when the white racists lost power and black South Africans liberated themselves from apartheid. Now Mhlangabezi Ndlelen is sitting in front of his corrugated metal shack in Wonderkop, a township about 100 kilometers (62 miles) from Johannesburg. The tiny hut -- all six square meters (65 square feet) of it -- houses Ndlelen, his wife and their children. Ndlelen has a bed and a table, but no running water.

He pulls a pay slip from his jacket. The Lonmin mining company pays him the equivalent of €600 ($750) a month to operate winches 1,000 meters (3,280 feet) underground. "It simply isn't enough," he says. "I have to feed my wife and three children with the money." Ndlelen was among the 3,000 workers who went on strike at the Marikana platinum mine more than two weeks ago.

The workers were demanding that Lonmin double their wages. They danced, sang songs and even waved spears and machetes. On Thursday, August 16, police officers finally lost their patience and fired into the crowd with automatic weapons. When it was over, 34 of Ndlelen's fellow miners lay dead.

Black police officers had mowed down black workers, just as the apartheid police had once fired on black demonstrators. The bloodbath is a disaster for the African National Congress (ANC), which has governed the country since 1994. But the party of national hero Nelson Mandela has already been losing authority and credibility for years. Nowadays, it is primarily viewed as corrupt, incompetent and arrogant.

Like Ndlelen, a large share of the black majority still lives in corrugated metal huts. South Africa's schools are just as miserable as the health care system, and youth unemployment exceeds 50 percent. The gap between rich and poor is now even wider than in the days of white rule.

Moreover, corruption is practically built into the structures of the ANC. "It's eating up the nation," says a union member. The South African economy is weakening as chaos, high crime rates and the arbitrary behavior of officials scare off investors. South Africa runs the risk of sliding into the status of a developing nation despite the fact that four of the world's rising economic powers -- Brazil, Russia, India and China -- had just accepted the country into their club in 2011.

For many years, it has only been the legendary victory over the whites, the halo that surrounds Mandela's successors, that has repeatedly saved the ANC in elections.

It was to Mandela's credit that the revolution remained peaceful. He had spent more than 27 years in prison, and yet the man, now 94, urged his countrymen to exercise restraint. In doing so, he averted a bloody reprisal campaign by blacks against their white oppressors.

But now his party's rivals are becoming stronger. The Democratic Alliance, led by white civil rights activist Helen Zille, sharply criticizes the ANC for corruption and waste. And the Congress of the People, an ANC spin-off, is snatching away votes from the governing party among members of the black middle class.

South Africa's population of roughly 50 million will vote again in 2014. President Jacob Zuma, also the ANC leader, plans to run for re-election. But the Marikana massacre could dampen his prospects.

"Why didn't he talk to us after the shootings?" asks Ndlelen. "And why did he talk instead to the management and a few of the wounded in the hospital?"

Like Ndlelen, many ordinary workers haven't felt represented by the ANC in a long time. Its top officials live a life of obscene luxury. Embroiled in their intrigues and power struggles, they seem to have forgotten the well-being of ordinary ANC supporters long ago.

"The fight for power in South Africa doesn't take place at elections. It is being waged within the ANC," says Gareth Newman of the independent Institute for Security Studies in Pretoria. This is because the ANC still functions like a combat organization.

As if it still had to protect itself from spies, the party's meetings are closed to the public. Lists of candidates are drawn up behind closed doors, for example, and sometimes the meetings turn violent. At the last ANC convention, security officers had to use pepper spray to separate delegates who had come to blows.

The violent clashes come as no surprise because privileges and a lot of money are often at stake. Since it governs alone, the ANC is free to distribute government offices and other perks as it sees fit.

Zuma faces a tough fight to be chosen as the ANC's top candidate for the coming election. His strongest opponents are current Deputy President Kgalema Motlanthe and Minister of Human Settlements Tokyo Sexwale, a billionaire businessman. Zuma has been weakened since he had a falling out with Julius Malema, the former head of the ANC Youth League.

Malema, 31, cultivates a rapper-like image. He likes to wear T-shirts and large gold chains, and drive flashy cars. He has wealthy benefactors who prefer to keep a low profile, gives ostentatious parties and loves to drink Johnnie Walker Blue Label.

But the populist has captured the spirit of young blacks waiting to finally benefit from regime change in South Africa. Malema tries to channel their frustrations and hate against others, calling for the expropriation of white farmers and castigating "American imperialists" who are allegedly subjugating the country. In a rare move, the ANC ejected Malema from the party because of his diatribes.

Malema immediately went to Marikana after the mine massacre. "You no longer have a president," he told the survivors. Malema sees himself as the voice of the lower class, the people who didn't benefit from the end of apartheid. No one knows exactly what he plans to do next. South Africans speculate that he might establish his own party. It's also possible that he intends to return to the ANC now that he has strengthened his position.

Moeletsi Mbeki, 66, the brother of former President Thabo Mbeki, a refined and charismatic man who prefers to speak rather than listen to others, is seen as the voice of the critical upper class within the ANC. He wears tailored suits and invests in logistics and media companies. People like Mbeki are known as "black diamonds" because they know how to make money.

"There is something very wrong with South Africa," Mbeki says, "in particular with how the political elite are managing the country." He wrote a book about the corrupt ruling class on his continent, as if he himself were not part of the caste of the powerful. He refers to many other black politicians as "architects of poverty" whose "main objective is to maximize their own consumption and the consumption of those who keep them in power."

Mbeki fears that: "In the long run, the ANC will lose the power." He predicts that new groups will develop alongside the old party, and that the people will begin to wake up.

One of these people is Mhlangabezi Ndlelen, the mine worker in Wonderkop. He has long complained about the miners' union, which has ties to the ANC. "They do nothing for us, they're in bed with management, they get the best jobs, and they go away -- and we're left behind," he says. It wasn't the miners' union but, rather, an independent and radical union that organized the disastrous strike in Marikana.

"We were sitting around a group of rocks when they showed up and tried to surround us with barbed wire and tanks," Ndlelen says. He ran faster than he'd ever run in his life. "There were helicopters circling above. And then we heard the gunshots." He says that he will never vote for Zuma again.