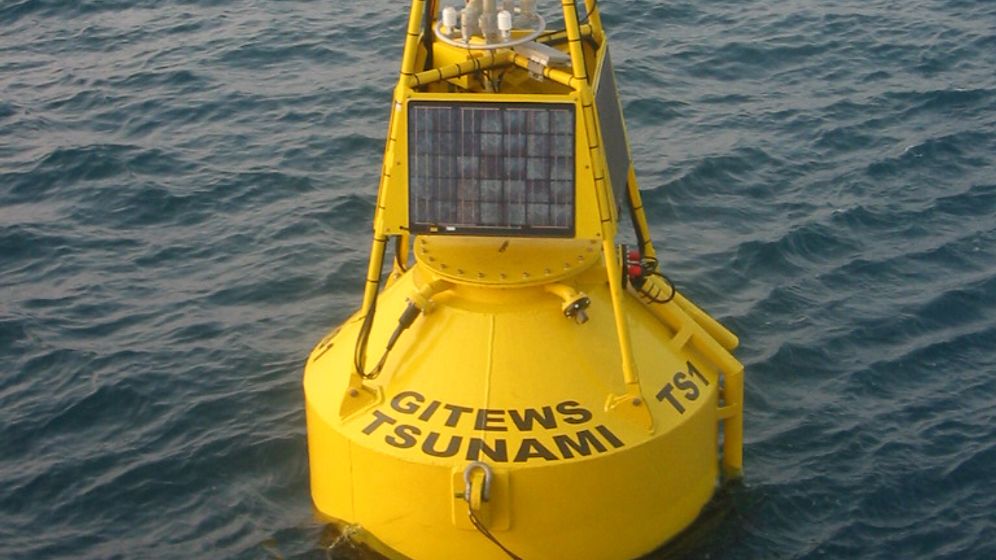 Following Monday's tsunami in Indonesia, a dispute has broken out over the local tsunami warning system that was designed largely by German engineers.

So far at 408 bodies have been found on the beaches of the Metawai island chain, a spokesperson for the West Sumatra disaster protection agency reported. An additional 338 people are reported missing. Search and rescue officials fear that the missing were dragged out to sea by the waves. Tsunamis measuring up to eight meters (26 feet) rolled over the west coast Monday evening after a 7.7 magnitude undersea quake near the island of Sumatra. Local media reports the destruction of up to 25,000 homes.

Now local scientists have raised questions about the region's German-built tsunami alarm system. Berlin spent €45 million ($62.2 million) on equipment after a massive tsunami in southeast Asia killed 210,000 people in 2004. On Monday, the warning buoys intended to signal dangerous approaching waves remained silent, according to complaints by an Indonesian ocean researcher reported by the BBC. The €300,000 devices were reportedly not functioning. Residents said no sirens had sounded, and that the tsunamis came as a complete surprise.

But the criticism of the equipment may be unjustified. It appears, instead, that local officials failed to act -- at least according to documents from Indonesian authorities obtained by SPIEGEL ONLINE. They show the tsunami warning system did function largely as designed. At 9:47 p.m. local time, just under five minutes after seismic equipment measured the earthquake, the Jakarta-based warning system tripped a tsunami alert.

But the alert was lifted after 39 minutes -- just as the tsunamis arrived on the coast of Sumatra, behind the Mentawai Islands. "They were only 23 centimeters (9 inches) high in the city of Padang (on Sumatra)," said Jörn Latuerjung of the German Research Center for Geosciences (GFZ) in Postdam near Berlin. The earthquake sensors and early warning systems were installed during the past five years under his direction.

The warning system was of little use to the islanders because the quake's epicener was located so close to shore, and the waves washed onto the Mentawais only minutes after it hit. "Warnings can't be communicated that quickly," said Peter Koltermann, a long-time employee at the tsunami division of the United Nations' UNESCO agency.

So why did the sirens remain silent all night, as residents have complained? The local relay of alerts, the so-called "last mile," is considered a weak point in tsunami warning systems. Social scientists have criticized this aspect of the German network. But relaying the alarm along the last mile is not the responsibility of the engineers. Indonesian authorities are required by law to do so -- in fact no one else has that power.

German development workers have made efforts in three areas along the coast to mitigate last-mile problems. They complain that a local understanding of German standards is lacking. Cables are strung from palm trees instead of being buried in the ground, as stipulated in the instructions. Harald Spahn of GTZ, the German federal agency for international cooperation, says it will "take years" before the relaying of tsunami alerts can function in every village.

Next Tsunami Could Come Soon

Still, experts are baffled as to why the tsunami caught island residents by surprise -- the earthquake, after all, shook their coast. It's possible that improved tsunami exercises are needed to make the dangers clear to people, Koltermann said. Residents told local media that they didn't notice the tremblor because there had been a heavy rain. But when the first wave arrived, many fled to higher ground. "The dead are mostly people who didn't escape before the second wave," a resident told the Jakarta Post.

What's clear is that the deaths were not the result of a buoy failure. UN experts did confirm to SPIEGEL ONLINE that at least one buoy near the disaster area was damaged, but that was a known problem. (Most tsunami warning buoys in the Indian Ocean are routinely out of operation.) One German buoy broke away because of heavy algae growth; another was cut off by a fishing boat. For a time, five of India's six warning buoys were missing. It's believed that pirates stole and dismantled them before selling the parts at markets.

The importance of the buoys for the entire tsunami warning system isn't great. They serve to check whether an undersea earthquake has actually triggered a wave. But after a strong quake like Monday's, the alarms always go into their highest level. "In a case like this, you don't even need the buoy data," said Koltermann.

But local residents do need to know there has been a strong earthquake on the ocean floor -- and it still isn't clear why the Mentawai islanders did not have that information on Monday.

Seismologists are also warning about further tsunamis. Studies by seismologist Kerry Sieh at the Earth Observatory of Singapore and his colleagues show that the earthquakes off Sumatra have a domino effect. One earthquake triggers the next. Sieh said an earthquake stronger than Monday's is likely soon. The scientists believe the area near Siberut island near Sumatra is threatened with an earthquake with a strength of 8.8, which could in turn trigger massive tsunamis.