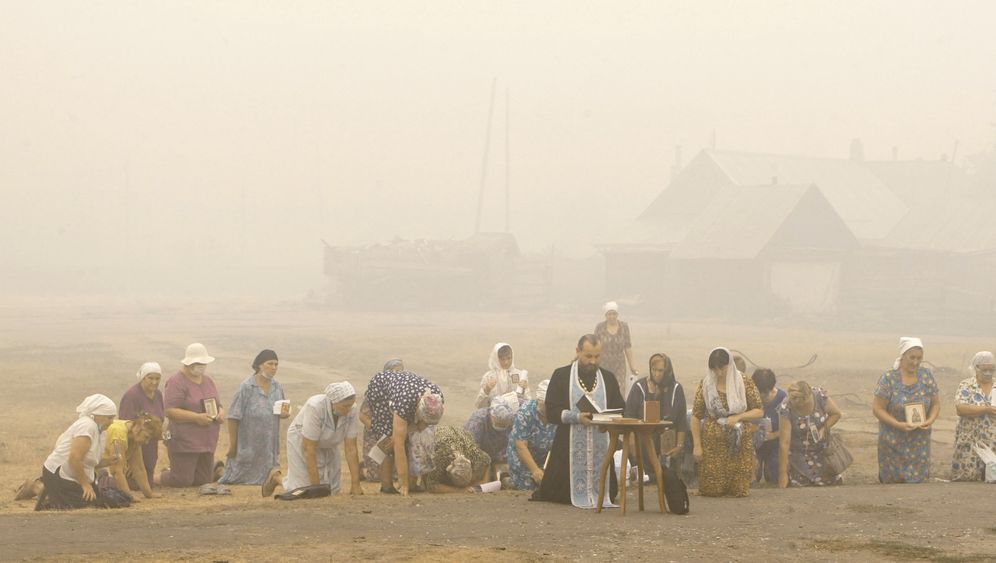 It sounded like a huge finale when a heavy thunderstorm came crashing down on Moscow in the early hours of last Friday. But it was too early to celebrate the end of Russia's wildfire disaster. After scorching the region for exactly two months, with daytime temperatures of over 30 degrees Celsius (86 degrees Fahrenheit), on Friday morning the heatwave continued. The suffering will go on, at least for this week.

A total of 505 existing wildfire hotspots were still blazing on Friday. While the Emergency Situations Ministry was already announcing that the fires were being brought under control, the heat had sparked new fires at 245 new locations. To make matters worse, it is primarily in areas contaminated with radioactivity that firefighters still have to battle the flames.

It was only last week that the government admitted that fires have been burning since mid-June in the very districts that were contaminated with radionuclides following the nuclear accident at Chernobyl, Ukraine in 1986. Although there is no danger that the fires will again cause a plume of radioactive fallout to extend as far as Western Europe, there is a significant risk for local residents. But so far the authorities have refused to answer the question of whether additional areas were contaminated with the dangerous radioactive isotope, caesium-137. One environmentalist said that he suspects they are keeping quiet because they fear that even more claimants would otherwise be entitled to compensation payments from the state.

The Cost of Mistakes

Russia's summer disaster of 2010 is bound to have long-term consequences for its environment and economy. But does the same hold true for its politics?

Anyone, such as the Russian leadership, who refuses to share power with the people, sees democracy as an inconvenient encumbrance, arbitrarily intervenes in the market and trusts no one in his surroundings, is bound to keep making new mistakes. The cost of these mistakes, though, will rise with each new blunder.

And so the lies, cover-ups and manipulation will continue in Moscow. Nobody actually knows how many victims have succumbed to the fires and the smog over the past weeks. Hospital physicians have been banned from diagnosing "heatstroke" as a cause of death.

Just after the sky briefly turned blue late last week -- thanks to a northerly wind -- and the mood among Muscovites had slightly improved, the authorities tried to play down the wildfire disaster.

The Chernobyl forests are burning? "Don't spread any panic, everything is calm there," said a government official, as he dismissed Greenpeace reports. The Russian forestry service announced that all fires in the area around Moscow were "under control." The doctor who, only a few days earlier, had said that the daily number of deaths in the capital had doubled, also had to publicly tone down his statement.

In order to put the people of Moscow at ease, residents were distracted with propagandistic gimmicks, just like in the good old days. For instance, top city officials instructed seven movie theaters in the capital to show free films during the midday heat and to hand out one bottle of mineral water -- 0.33 liters (11 fl. oz) -- to each filmgoer entering the building.

The government is acutely aware of the fact that the mood in the capital is decisive, and they have no qualms about keeping the population in the dark about anything that happens in the rest of the country -- even if it sometimes could scarcely be more dramatic.

On Aug. 4, for example, wildfires raged to within 200 meters (650 ft.) of the settlement of Leplei in the republic of Mordovia and threatened a number of prison camps, which were built in the surrounding forest during Stalin's reign. Some 15,000 inmates are currently held there. The Emergency Situations Ministry dispatched a special train to extinguish the flames, but the rails suddenly came to an end: Four years ago, the prison administration had dismantled the railway line leading to the camps -- and no one had noticed.

Russian newspapers also buried on their back pages the story that one of the country's largest chemical weapons storage facilities was threatened by the fires. The Maradykovo arsenal, established in 1941, is located in the village of Mirny in the Kirov region. It is here that Moscow stores aerial bombs filled with 6,900 tons of nerve gases like sarin and soman, which the military has been gradually destroying since 2006.

Did the blaze in a munitions factory outside Perm on Wednesday night also have something to do with the wildfires? There was a series of explosions at the facility, which has a long history, having produced explosives for the feared Katyusha rockets during World War II. Shortly beforehand, not far from Perm, a number of villages had burned down.

Even if many of these stories don't reach average citizens, for many Russians the government's credibility has hit rock bottom even without these latest reports. The Ministry of Agriculture announced that there was no reason to raise bread prices. But this flies in the face of the fact that many Moscow shops have already put up notices informing consumers that "in connection with the higher cost of flour" bread prices are being increased by up to 20 percent.

On Thursday, Russian President Dmitry Medvedev, who has returned to the Black Sea to resume his vacation, also acknowledged the seriousness of the situation and issued a warning to speculators. He said that since "the most sensitive food category is affected," the government and public prosecutor's office would have to "carefully observe pricing policies."

It may be that the grain mills are using the current fire crisis to make some necessary changes to their business, which was already ailing. But the news that this year's grain harvest is expected to produce only 60 million tons -- one-third less than the level achieved in 2009 -- has triggered widespread unease.

The Russians speak of "manual control" when they refer to the current crisis policies of their leaders, meaning that the government lacks any long-term strategy to cope with the disaster. And whenever Prime Minister Vladimir Putin's popularity wanes -- as is currently the case -- he resorts to the same old media tactics. He had himself filmed last week sitting at the controls of a firefighting aircraft as he supposedly single-handedly extinguished two hotspots. But this has only met with mocking commentaries in the Russian newspapers where such criticism is allowed.

Amateur in the Cockpit

He pulled a similar stunt in the run-up to the 2000 presidential elections when, in the midst of the second Chechen war, he climbed into an army fighter jet to portray himself as a defender of the fatherland. These images are "the quintessence of Putin's power," wrote columnist Natalya Gevorkyan on a popular website. "This man in the aircraft is doing something that he is simply incapable of doing, instead of doing his real job seriously. Putin is, at the top of the government, the same amateur as he is in the cockpit."

Russia is burning. One leading political scientist compared the current situation to the country having to simultaneously deal with Chernobyl and the 1987 flight of Mathias Rust. At the time, the Chernobyl disaster made it clear that Moscow could not handle nuclear energy, while the daredevil flight of the German pilot Rust, who seemingly appeared out of nowhere to land his Cessna on Red Square, exposed the weaknesses of the purportedly powerful Red Army. But now, says the political scientist, it appears that Russia, which is supposedly becoming strong once again, has no firetrucks, no firefighting aircraft, no forestry workers and no geographical maps to locate the areas that require extinguishing.

These are essentially consequences of Putin's policies. It was the former KGB colonel who, in the wake of the Beslan school hostage crisis in the Caucasus region, abolished governor elections. Since 2004, in order to "more effectively" deal with emergency situations, the governors have all been handpicked. The most important thing is that they should be loyal and do what Moscow says. This means that the Kremlin has effectively made its governors into puppets that rarely take action without instructions from headquarters.

The governor of the Sverdlovsk region calmly went on vacation on Aug. 2, even though a large national park in the vicinity of the provincial capital had already been burning for three weeks. Over 300 residents of the Vladimir region wrote to the president, asking him to discharge their governor because he had also been absent during the fires. And the governor of Nizhny Novgorod, in whose region 11 villages burned to the ground and 21 people lost their lives, had the nerve to report to the prime minister that the situation was under control.

Any other statement would have been interpreted as a sign of weakness. Russian governors are not primarily concerned about their subjects, because the people don't elect them and, of course, cannot remove them from office. Instead, the governors' main objective is to make a good impression with the Kremlin.

Putin has entered into a vicious circle. Last week he placed Russia's forests under his jurisdiction after realizing that it was a huge mistake to dismantle the forest service and the State Committee for Environmental Protection.

In the country with the most forests in the world, Putin's policies have ensured that three-quarters of the country's 80,000 forestry workers lost their jobs and that firefighting became a hit and miss affair. Now the Russian forestry service will answer directly to the government -- but should the Kremlin be responsible for everything in a country that extends across nine time zones?

The prime minister continues to portray himself as the man of the hour. According to one media agency, while the fires blazed, Putin appeared nearly 1,000 times more often in newspapers and on TV than President Medvedev. Was Medvedev's comment last week, that it was unacceptable to use the current natural disaster "to polish your image and score political points," perhaps directed at his political mentor?

That would have been too good to be true. It would have meant that the wildfires had actually had an impact on the inner workings of the Kremlin. Medvedev's attack, however, was directed at the opposition.