It all began with a scratchy throat on Friday, March 13. A colleague had brought the novel coronavirus back with him from the Austrian ski resort Ischgl. Shortly thereafter, Alexander Riesch, 26, whose name has been changed for this story, also tested positive for the virus.

"At first I thought, well, at least now you'll have gotten it over with," Riesch says. His doctors also had no doubt: The body of a young, healthy person wouldn't take long to vanquish the virus. They sent Riesch home to recover. But a few days later, he felt so miserable that he had to call an emergency doctor. He spent a week in the hospital.

Officially, Riesch has been recovered for nearly three months. He has antibodies against the virus in his blood. Yet he still goes through spells in which he feels very sick. So far, none of his doctors have been able to explain why.

In addition to suffering from sore throats that range from mild to severe and seem to come and go at random, his lungs are also still affected. The symptoms didn't begin until after the doctors released him from the hospital and he returned home. A respiratory physician prescribed him an asthma inhaler and advised him to be patient. The cortisone does help a little, Riesch says, but his cough and the tightness in his chest return as soon as he stops taking it.

There's also the sudden muscle pain. Sometimes the left half of Riesch's body becomes numb, other times he feels so weak that he has to lay down immediately. And that's not even to mention the abdominal pain and nausea, skin rash and severe fatigue.

Riesch was on sick leave for 10 weeks. Meanwhile, he's back at work as a real estate agent. But every now and then, he has to cancel appointments because he simply feels too exhausted. Most of the time, he tries to live a normal life. "I've come to accept the pain I'm in now."

Half a year since the pandemic began, doctors are now observing an increasing number of coronavirus patients like Riesch who are officially recovered but in reality are far from healthy.

"COVID-19 is very unpredictable," says Timothy Spector of King's College London, who is tracking the course of the disease in more than 200,000 COVID-19 patients over a longer period of time, with the help of a mobile app, as part of a major research project. "I am trained as a rheumatologist, so I am used to strange diseases. But COVID-19 is the strangest disease I know."

Roughly one in 10 people with the disease continue to suffer from unexplainable symptoms for more than a month, many for more than two months. The most common are exhaustion, headaches, a loss of smell, trouble breathing, dizziness, diarrhea and skin rashes. "And some of our participants still have a fever after three months," Spector says.

Severe damage to the lungs, heart and nervous system in some people is also of concern. The disease can cause cardiac arrhythmia or even trigger diabetes mellitus. Some patients suffer from severe concentration and memory disorders, much like dementia. Even young people can be affected. More than 1,000 children around the world have contracted multisystem inflammatory syndrome in connection with a SARS-CoV-2 infection, which can lead to myocarditis and circulatory failure.

Nothing To Be Done

"Many patients say: 'Before the coronavirus infection, I was a different person,'" says the Swiss heart surgeon Paul Vogt. Doctors now fear that the pandemic will leave behind an army of chronically ill people. Some hospitals in Germany are already beginning to set up outpatient clinics for the follow-up care of COVID-19 patients.

"People tend to think: Either you are dead, or you are healthy again," says the British physician Helen Salisbury. "But it does not work like this."

For weeks, all people talked about was intensive care units and artificial ventilation. "But now there are all these people, that will maybe be ill for a long time."

Salisbury treats several people who were infected with SARS-CoV-2 and still suffer from exhaustion and bouts of fever or coughing and who quickly get out of breath. "All the tests are normal," she says. "There is no therapy I can offer to them." Many of the chronically sick are young -- and desperate. "But I can do nothing but listen to them," Salisbury says.

It's still a mystery to experts as to why the symptoms are so persistent and severe even after the patients have supposedly recovered from the disease. Doctors suspect it could be due to malfunctions in the immune system caused by an infection. It's also possible that once the virus succeeds in establishing itself somewhere in the body, it can strike repeatedly.

Or the lasting ailments could be a consequence of a lack of oxygen during the acute phase of the disease. Young COVID-19 patients in particular often don't notice for a long time just how badly their body is doing.

Doctors see a parallel to another coronavirus disease. After the SARS pandemic in 2003, doctors continued to notice many chronically sick people, for instance in Toronto, Canada, where the worst outbreak outside of Asia took place. "When I heard of the SARS-CoV-2 long-term patients, I thought: Oh, I was waiting for this," says Harvey Moldofsky, a sleep and pain researcher and a professor emeritus at the University of Toronto.

A physician, Moldofsky has been a specialist in unusual diseases since early on in his career. That's why he was asked to step in and help after the 2003 SARS pandemic had subsided. "There was a group of 50 people that had all survived SARS, but although they had gone through rehab, they could not go back to work full time," Moldofsky says.

He interviewed 22 of those people in detail, and the stories he heard all sounded similar. "Over one year post-infection, they were still fatigued, weak, had muscle pain, sleeping problems and could not think straight," says Moldofsky.

All of these grievances are familiar to experts. Patients suffering from chronic fatigue syndrome also complain of muscle, head and neck pain. Many also speak of a "brain fog" that prevents them from being able to concentrate.

A number of viruses are believed to cause chronic fatigue syndrome. Among them are the influenza and Epstein-Barr viruses, the latter of which is known to cause infectious mononucleosis, or mono. Researchers now suspect that the strange affliction is, in fact, an autoimmune reaction triggered by the viral infection, which can affect the autonomic nervous system. Other symptoms can include heart palpitations, an increased susceptibility to infection and sleep disorder.

Carmen Scheibenbogen, the head of the outpatient clinic for adult immunodeficiencies at Berlin's Charité University Hospital, is one of the few German experts on chronic fatigue syndrome. Many people with COVID-19 are currently turning to the physician for answers about their odd symptoms.

But even she has to disappoint them for the time being. A reliable diagnosis can only be made six months after infection. "By then, there's a good chance that everything will calm down on its own," Scheibenbogen says. Only symptoms that last longer than six months are considered chronic. And even then, there are few options for treatment.

Scheibenbogen advises those affected to take good care of their bodies. "Overexerting oneself or doing sports that exacerbate symptoms should definitely be avoided. This can make things worse," she says.

In addition to chronic fatigue, COVID-19 patients can also suffer from a number of other neurological complications. "The neuroscience research community is slowly waking up to this," says Benedict Michael, a senior clinician scientist and neurologist at the Health Protection Research Unit and the University of Liverpool. He adds that 20 to 30 percent of patients who require hospitalization develop some neurological complication.

In late June, Michael and some colleagues published a study on the matter in the medical journal The Lancet Psychiatry. In it, they examined 125 patients who developed neurological problems as a result of COVID-19. Around 60 percent of participants, mainly older people, suffered a stroke after being infected. Close to a third of them showed signs of other cognitive or psychiatric changes, including many younger patients.

In all, 8 percent of the 125 people examined developed a psychosis in connection with their coronavirus infection. Just under 5 percent developed dementia. "Many young people are still living their lives in the pandemic and do not even think about the fact that there is a potential risk of developing problems for them too," warns Michael.

At least in some cases it's easy to explain what caused the brain damage. Strokes can occur because COVID-19 often causes blood to clot. It's also known that the SARS-CoV-2 virus can sometimes lead to encephalitis.

In many other cases, however, the cause of the complications is still unclear. "It is quite possible that this is an immune reaction," Michael says. For some, it could also be a result of stress or a lack of oxygen -- or everything altogether.

Not the Only One

For many patients, there's still hope that the neurological and psychiatric problems, as well as the other persistent complications like exhaustion, will diminish or eventually disappear.

The case of the general practitioner Stephanie de Giorgio from Kent in the UK is also cause for hope. The 44-year-old was likely infected by one of her patients. A mother of two, de Giorgio had no risk factors other than mild asthma and being a bit overweight could have been cause for concern. "Well, now it has got me, too," she thought. Fifteen days later, her fever subsided.

But many of the other symptoms remained. The worst was the dizziness, she says. "It felt like the floor suddenly moved." She even fell down a few times because of it. "I crawled up the stairs, just in case, and I took a shower sitting down."

She was also extremely fatigued. Her heart would begin to race with the slightest exertion. Her fever also came back in waves.

"At first I thought I was crazy," de Giorgio says. "But then I started seeing patients that had the same problems. And after I talked over the internet with all those other people, I realized: I am not the only one who is suffering."

She could only work a couple days a week at most. Afterward, she was completely exhausted. Her brain, too, didn't seem to be functioning properly. "I could not think straight," she says. "When I was baking, I put the eggshells in the bowl and threw the egg away."

After a day of gardening, she had to spend the next two days in bed. "When I overdid it, the illness got back at me."

But now, for the past few days, after more than three months of suffering, she finally seems to be getting better. "I can understand that people get scared by this," de Giorgio says. "It is important to not let them alone." 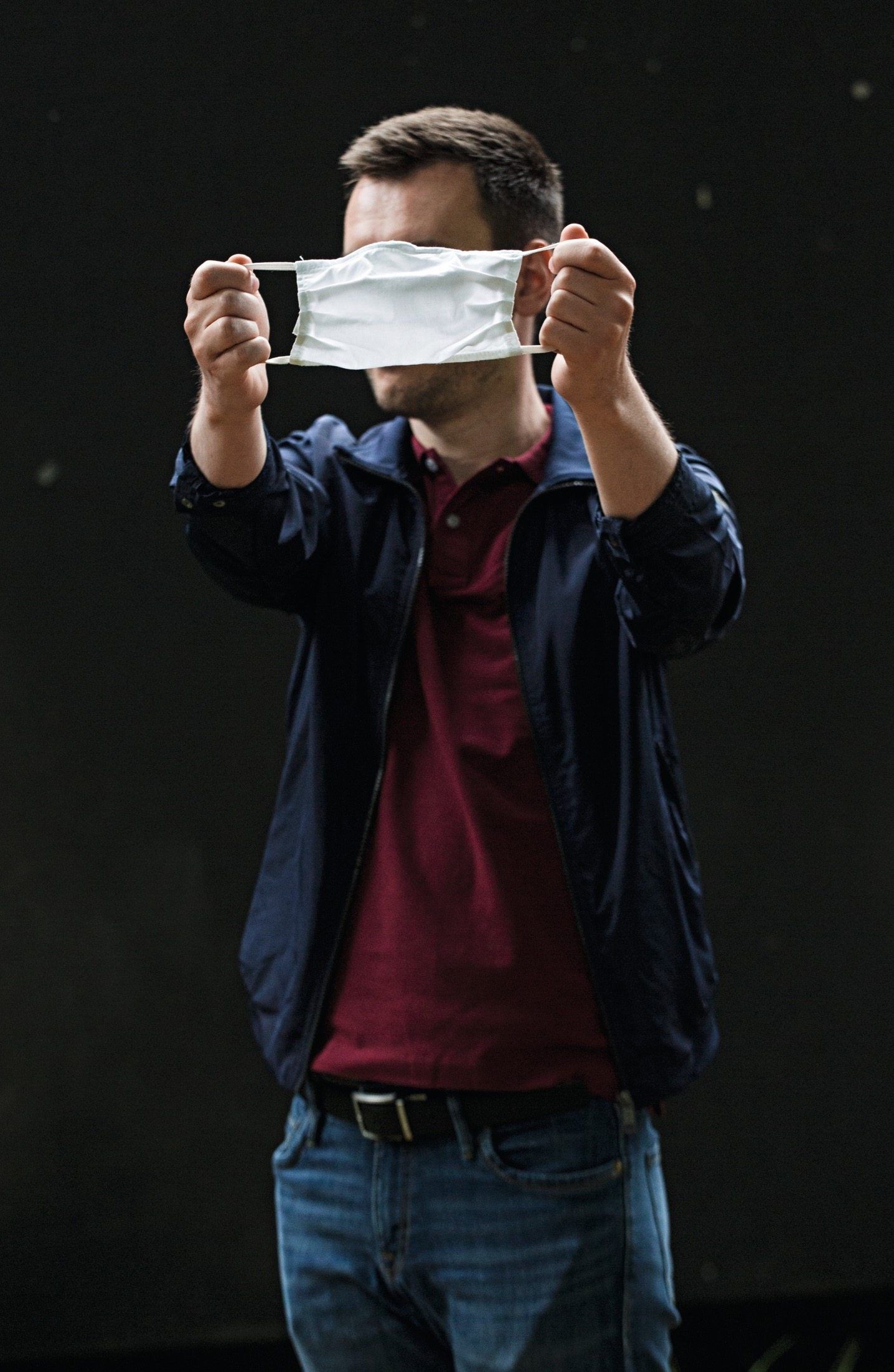 The real estate agent Alexander Riesch (whose name has been changed by the editors) still feels sick even after officially recovering from COVID-19. 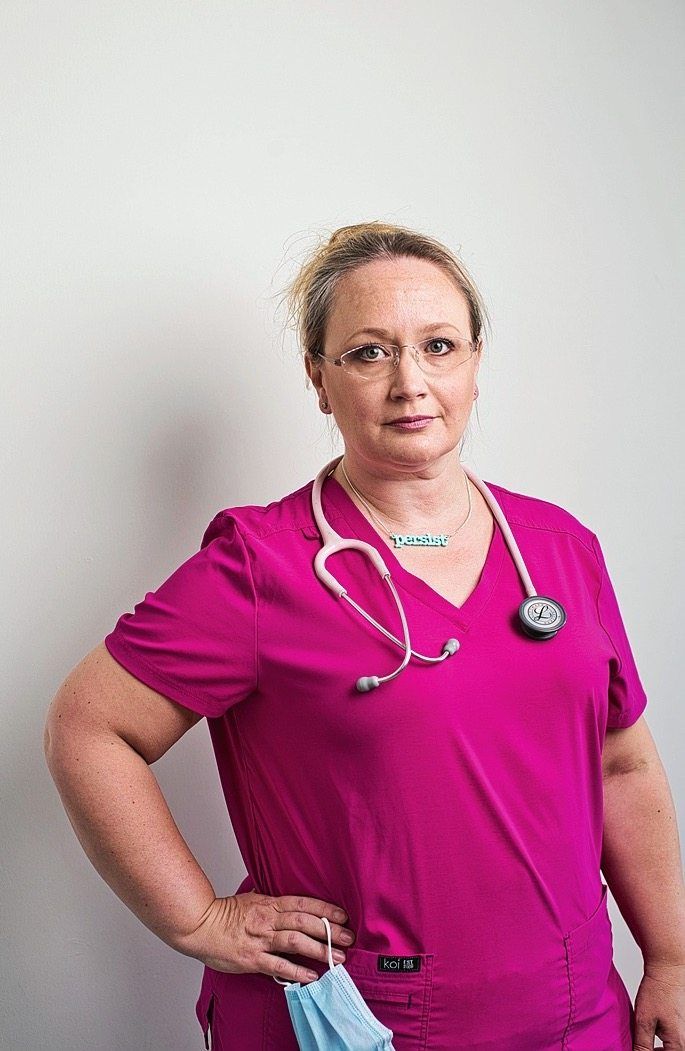