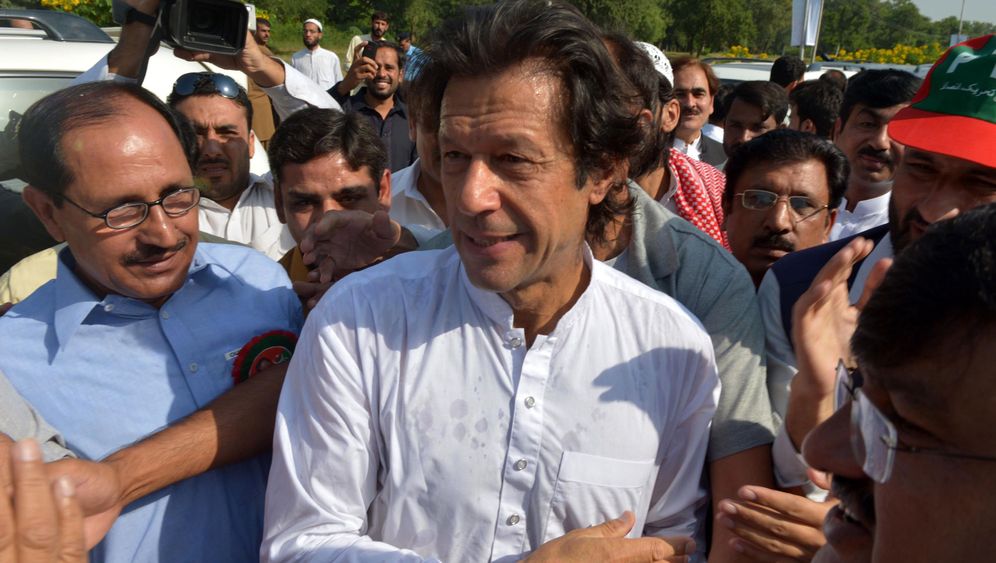 Imran Khan comes out of his room, wearing old athletic shoes, a worn sweater and sweatpants, even though he is about to meet with top officials from his party. "Appearances aren't that important to me," he says. When asked if that applies to politics as well as sports, he replies, "To everything." Imran Khan follows his own rules.

A professional cricket player for 21 years, Khan was one of the world's most successful athletes. And now, at 60, he is the current star in the campaign for Pakistan's national elections on May 11. According to the polls, he is already more popular than the president and the prime minister combined.

Khan is battling the extremely powerful system of the established parties, and in doing so is upending Pakistani politics. He wants to ensure that large landowners pay taxes in the future, make peace with the Taliban and insurgent Pashtuns and remove the country from the Americans' sphere of influence, a popular position in a nation where anti-Americanism is so pronounced. He also wants Pakistan to reconcile with its neighbor India and with Iran, as a potential future nuclear power. In short, Khan wants to do everything differently than all other Pakistani governments in the 65 years since the country gained independence.

In 1992 Khan, then captain of the national cricket team, won one of those rare moments of pride and glamor in the history of his country when he led the team to victory in the World Cup against England. The victory cemented his fame.

Now Khan's party office is in a separate bungalow next to his house high above Islamabad. Seven men await him there, some wearing nice suits and others in polo shirts or traditional garments. One of them is former Foreign Minister Shah Mehmood Qureshi, a longstanding supporter of Benazir Bhutto, the former prime minister who was assassinated in 2007.

Khan's Pakistan Movement for Justice Party, or Pakistan Tehreek-e-Insaf (PTI), aims to attack the country's self-righteous elites, easy targets in a complicated country largely dominated by the military, in which citizens are constantly exposed to exploitation by the rich and powerful as well as to the deadly violence of extremists and separatists. To make matters worse, Pakistan now faces the renewed threat of national bankruptcy.

It sounds like a curse when Khan, in his smoky voice, describes in his campaign speeches how he intends to run the corrupt people in power out of office, the people who are looting the country and yet live in shameless luxury. He has published basic information about his own assets, as well as his last tax return, on his party website, and all of his top officials are required to do the same. Khan says he is not one for compromises, and that if he doesn't become prime minister, he'll enter the opposition. He vows that he will not form a coalition with his political rivals.

Khan is sitting in the front of the car, in the passenger seat, on the road to Lahore. He says the same thing every day, to himself, to his fellow party members and to journalists: "We will win. I know we will." He behaves as if his visions were almost a reality, and are in fact unstoppable. Recently, at a large rally, he used his smartphone to tweet: "Overwhelming! N (former Prime Minister Nawaz Sharif) and PPP (the Pakistan People's Party) need to know! Change is already here! No one can stop the PTI tsunami!"

On this particular Saturday morning, he looks a little worse for the wear. His dark hair is thinning on the back of his head, but he still has charisma. No other politician in Pakistan can bring such large crowds into the streets. Khan looks like a cross between rock star and Robin Hood as he steps up to the microphone in his leather jacket and turned-up collar. "We can collect 3,000 billion rupees (€23 billion, or $30 billion) in taxes. We need no help from abroad. We would rather die than beg," he proclaims.

He maintains a presence in the streets, and he has a Facebook page. For weeks, Khan has been traveling all over Pakistan, usually by car, giving speeches in places like Faisalabad and Toba Tek Singh. He dispenses with bodyguards, an exception in this country where top politicians receive death threats and many are murdered.

"I feel the same enthusiasm I felt going into the World Cup in 1992," Khan tweets. "It's back again today, but now it's getting more intense the closer we get to the day we change the fate of our country."

But all indications are that Khan will not in fact assume power. The political system is controlled by the established parties. According to election forecasts, the PTI is likely to come in second or even third place. Foreign diplomats are already paying visits to the former and presumably next prime minister, Nawaz Sharif, anxious to be in favor with the right man.

In the end, Khan's popularity probably won't be enough, because the dynasties, consisting of a few dozen families, use the old parties to ensure that they remain in power. Party members enjoy lifelong benefits, and the closer an official is to the old guard -- at the feeding trough, so to speak -- the more he personally benefits.

These are the methods of President Asif Ali Zardari's PPP, but also of Sharif's Pakistan Muslim League. Even minor supporters can hope for crumbs: government contracts, jobs, a little money. This is still better than nothing in a country that has no functioning social network aside from the one fueled by corruption. This is why outsiders like Khan, people who want to upend the system, hardly stand a chance.

'You Learn to Fight'

Khan shrugs his shoulders. He believes in himself, in God and in his success, and that God wants him to succeed. He isn't worried about the polls. When in doubt, he turns to his second rule: "If you don't give up, you're unbeatable."

Cricket and politics have little in common, says Khan. But there is one thing they share, he adds, and it's important: "You learn to fight, and to pull yourself up after setbacks, analyze the situation and go on the offensive again." The veteran athlete's eyes seem to twinkle behind his sunglasses.

Pakistanis are captivated by Khan's charm. In March, 100,000 people turned up at a rally in Iqbal Park in Lahore, forming a sea of people in the provincial capital of the Punjab, normally a stronghold of his rival Sharif. The fans waited for hours to see Khan in person, fighting for seats near the front, desperate to touch him, shake his hand or sit next to him for a second.

How important are his looks in Pakistani politics? Khan smiles. Yes, he says, some were indeed envious of him in the past. And of course he knows that his looks are still a factor today.

Khan is back in Islamabad. He has a theory. He says that he wants to end the fighting in the tribal regions of northwest Pakistan within 90 days, and that this would be the key to peace in Pakistan. Khan himself is a Pashtun and has ancestors that came from the so-called tribal belt, the semi-autonomous region in northwestern Pakistan populated almost entirely by Pashtuns.

The Pashtuns in the region see the Pakistanis as America's mercenaries, says Khan. The government takes money from the United States, and in return the Americans are given free rein to wage war in Pakistan. Their drones fire missiles at terrorists in the tribal regions, often killing civilians. Tribal leaders don't believe that the Americans are truly fighting terror. Instead, they are convinced that they want to destroy Islam. That's why the Pashtuns have now joined forces with al-Qaida and the Taliban to combat the Pakistani government. "We'll solve our problem when we part ways with the Americans," Khan claims.

Rivals accuse him of being a terrorist in disguise, a secret weapon for the Taliban. Others say he is the army's candidate, especially after the former president, General Pervez Musharraf, who had just returned from exile, endorsed the former cricketer. Khan has already had three meetings with the former head of the notorious Pakistani intelligence agency, Inter-Services Intelligence (ISI).

It is certainly true that Khan has a great deal of understanding for the insurgent Pashtuns. He is also on good terms with military leaders.

From Jetsetter to Recluse

He is tall and light-skinned, likes to wear jeans and speaks the sophisticated English he learned at Oxford. In the 1980s, he was friendly with celebrities like Mick Jagger and Jerry Hall. Acquaintances described his apartment in downtown London as a mixture between a hippy pad and a harem tent. He says that he has enjoyed the life of a bachelor to the fullest.

Today Khan lives with his four dogs in the gently sloping mountains of Bani Gala, above Rawal Lake near Islamabad. "It's the ultimate place for me," he says. He doesn't drink, he prays five times a day, and his meetings with fellow party members are never attended by a woman. His marriage to Jemima Goldsmith, the beautiful daughter of a British billionaire, ended in divorce nine years ago. She left him, he says, because she couldn't live in Pakistan. Khan speaks of her as if she had just left the villa, surrounded by orange groves, five minutes ago.

Khan's path from jetsetter to recluse began in 1985, after his mother died of cancer. "No one was as close to me as she was," says Khan. He became obsessed with raising money around the world to establish Pakistan's first modern cancer hospital, in Lahore, which now treats the poor for free. He also met Mian Bashir, a Sufi mystic.

One day, when they were having lunch together at a friend's house, Bashir told Khan that when he was a child, his mother had read a specific Sura from the Koran to him every evening. Bashir saw and knew things that a person shouldn't actually be able to know, says Khan. In all the years after their first meeting, he adds, Bashir was never wrong, even when, unfortunately, he predicted Khan's separation from Jemima.

What exactly is a victory? Khan probably won't win this election, but he has already changed the country. Officials have to be elected in his party, in contrast to the standard practice of being appointed on the basis of loyalty and enthusiasm.

As Khan and his fellow party members sit on the terrace, a servant brings them platters of vegetables, rice, beans and salad. They chat and laugh together. If it doesn't work this time he'll continue the fight, says Khan. You can only lose if you give up. 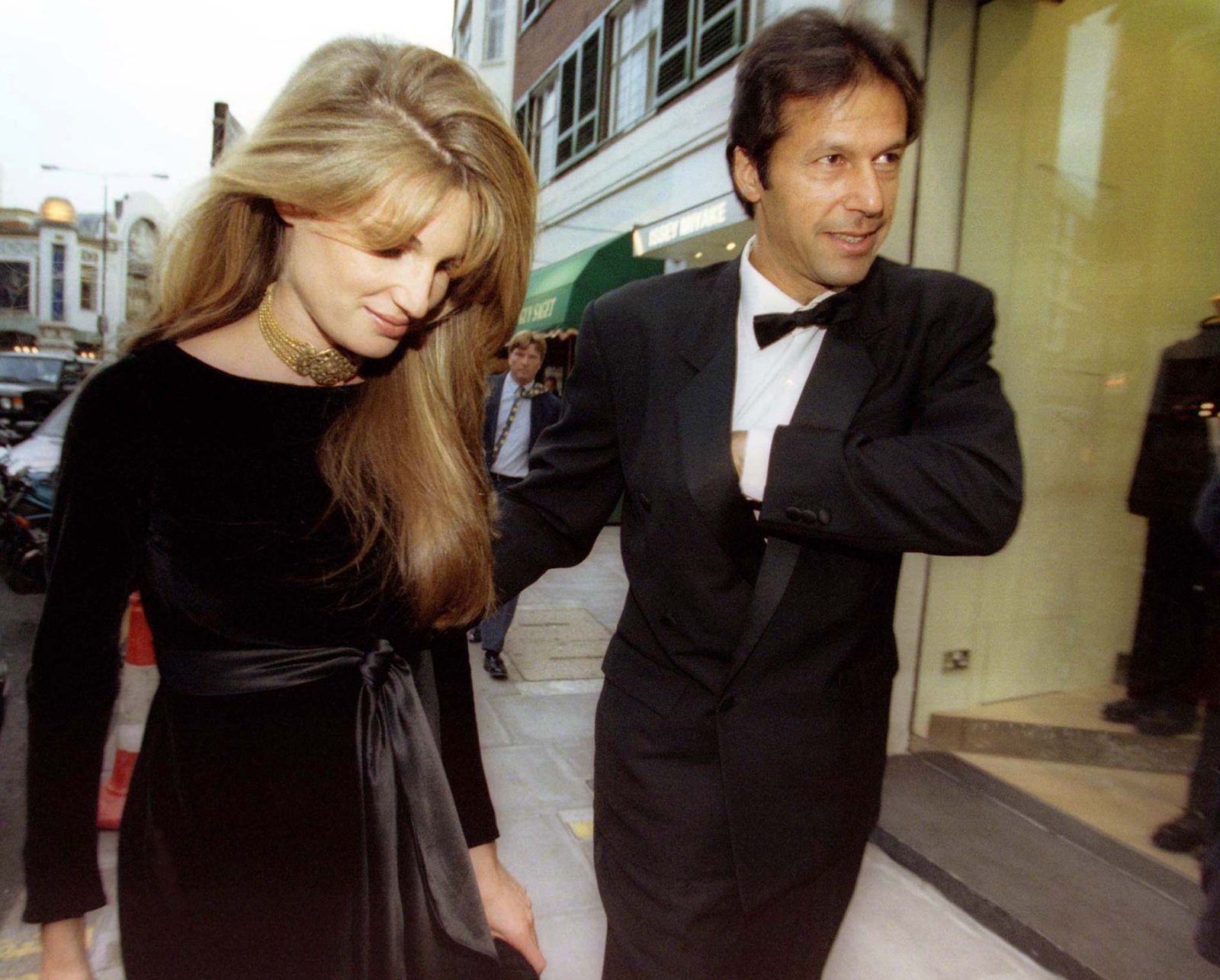 Khan's high-profile marriage to Jemima Goldsmith, the socialite daughter of a British billionaire, ended in divorce nine years ago. She left him, he says, because she couldn't live in Pakistan.