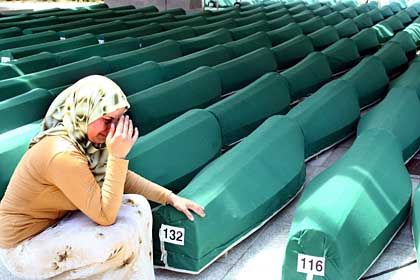 A Bosnian woman weeps next to the coffins of Muslim men and boys before their burial in Potocari, near Srebrenica, in 2004.

Munira Subasic, from the town of Vogosca near Sarajevo, lost 22 members of her family during the massacre at Srebrenica that lasted several days in mid-July 1995. Nine years after Serbian militias murdered more than 8,000 Bosnian Muslims, Subasic had to identify and later bury her dead husband. Her 20-year-old son Nermin remains missing today.

The deaths of her family members are not the 58-year-old Subasic's only inextinguishable memory. To this day, she is still unable to overcome the bitter hours of July 12, when she was staying in a refugee camp near Srebrenica. Dutch United Nations peacekeepers were assigned to protect the camp. But at some point, says Subasic, the Serbs began to "march girls and young women away from the group of refugees. They were raped."

She also witnessed the murder of a baby. A Serb, says Subasic, "told the mother to make the child stop crying. But when the baby continued to cry, he took it from the mother and slit its throat. Then he laughed."

Almost 12 years after these crimes were committed, Subasic's descriptions have acquired new force. Especially now that she has reported that Bosnians were not the only ones to witness such barbaric acts. According to Subasic, a Dutch soldier stood by and watched as the women were raped, even listening to music on his Walkman. A Dutch soldier also witnessed the murder of the baby, she says, and yet he "didn't react at all."

Subasic's story, and others like it, have triggered a new wave of outrage this week. They are part of a 228-page complaint filed on Monday in a court in The Hague. An Amsterdam law firm filed the lawsuit on behalf of Munira Subasic and almost 6,000 other survivors against the Dutch government and the UN.

The suit alleges that although the Serbs' murderous intentions were known, neither the Dutch, as a protective power, nor the UN, as the organization providing the mandate, took steps to save the local population. The attorneys are demanding €25,000 in initial damages for each plaintiff, as well as overall damages that have yet to be determined, for what they call the "worst genocide since World War II."

The disgraceful role the Dutch played in Bosnia has already been investigated by a number of commissions in the Netherlands, and it even led to the resignation of Prime Minister Wim Kok in 2002. But the current suit ventures into virgin territory in international law. It revolves around whether and to what extent UN peacekeepers charged with protecting a foreign population can be held accountable for their mistakes.

The judges will also be faced with the fundamental question of whether the UN can be held responsible for the failures of a military force under its command. It will be the first time that the global organization will be taken to court because soldiers operating under the UN banner were either unwilling or unable to protect the people they had been ordered to protect.

The attorneys responsible for filing the suit, Axel Hagedorn and Marco Gerritsen, of the Amsterdam law firm Van Diepen Van der Kroef, spent years preparing their brief. In it they paint a picture of a force that was incompetent, disinterested and solely concerned about the health and wellbeing of its own soldiers.

Even the training of the UN peacekeepers for the mission in the Balkans was extremely unprofessional, the lawyers write, charging that they were sent to Bosnia without adequate training in the first place.

The light weapons carried by the Dutch battalion, known as Dutchbat, also proved to be completely unrealistic. The unit was careful not to appear too warlike, instead preferring to come across as peaceable. But this stance would come back to haunt them. By early 1995, only about 10 percent of Dutch convoys actually made it through the Serbian ranks, leading to dramatic shortages of ammunition, food and medical supplies.

The Bosnian Serbs, led by Radovan Karadzic and Ratko Mladic, were able to gradually prepare their assault against the UN-protected zone, where there were about 40,000 Bosnians. But the Dutch remained persistently lethargic. General Bernard Janvier, the French commander of UN forces in Zagreb, told a national investigative commission: "If we had had 400 Frenchmen in Srebrenica, things would have been different. We would have fought seriously." 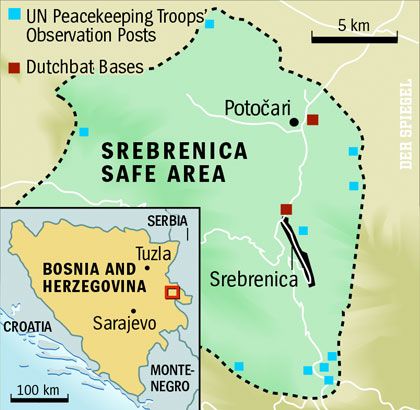 When a UN observation post near Srebrenica was attacked on July 8 and the Dutchbat command requested air support, nothing happened. Dutch soldiers later claimed that UN military officials in Sarajevo had refused to send the planes. "This is simply untrue," according to attorney Hagedorn, who says that the Dutch chief of staff, General Cees Nicolai, turned down the offer of air support, presumably acting on orders from The Hague. Hagedorn claims that Joris Voorhoeve, the Dutch defense minister at the time, intervened by telephone.

The suit alleges that the Dutchbat troops simply abandoned their position when Serbian paramilitary forces approached. "The Dutch had only one goal from the start," claims attorney Gerritsen, "namely to get all their soldiers home in one piece."

The Serbs managed to break through the UN defenses. And because they claimed to have 15 Dutch soldiers in custody, the Dutch commanders continued to categorically reject any air support. But a few peacekeepers didn't even abandon their posts under duress. "They went along with the Serbs of their own accord," says Gerritsen, "and with the blessing of the Dutch military leadership."

With Srebrenica captured, the Serbs had reached their objective. A few frightened Dutchmen even laid down their weapons -- a total of 199 rifles, 25 submachine guns, 28 pistols and 29 machine guns. Dutchbat officers advised the terrified women and children to flee to the refugee camp in the nearby town of Potocari, where they told them they would be safe. Between 10,000 and 15,000 men escaped into the forests, planning to make their way to Tuzla, which was considered safer. But very few made it. Most were blown up by landmines, captured or shot to death by the thousands.

The refugee camp in Potocari accepted only one in six of about 30,000 Bosnians seeking shelter there. The rest were forced to stay outside the camp. The situation became critical on July 12, when Serbs standing at the gate demanded to be allowed in to inspect the camp. The Dutchbat troops agreed. To avoid provocations, the UN peacekeepers laid down their weapons and placed them on a pile. When the Serbs began marauding through the camp, the Dutch soldiers simply looked the other way. After returning home, a Dutch soldier later said that he preferred to forget what he experienced on that day: "torture, executions and slaughter." 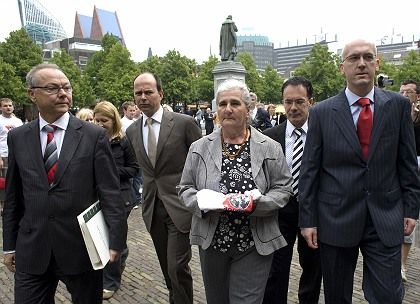 Dutch lawyers Axel Hagedorn and Marco Gerritsen, a "Mother of Srebrenica" Maunira Subasic, and lawyers Faruli Capina and Semir Guzin on their way to deliver a civil summons at the Dutch Supreme Court in the Hague, the Netherlands on Monday.

Instead of preventing the crimes or at least reporting them to the UN command in Sarajevo, the Dutch are even accused of having actively participated in the selection of Bosnian women and men. The Muslim men, some as young as 12, were almost all murdered. The scenes that transpired in the camp are indescribable. The Serbs would pick out girls from groups. "I saw the Bosnian women begging the Dutchbat soldiers to bring the girls back," Kadira Gabeljic, one of the plaintiffs, recalls. But they only responded: "no, no, no."

Ramiza Gurdic, another plaintiff, witnessed an incident that she is unlikely to ever forget. She describes a scene in which a 10-year-old boy was placed in his mother's lap and literally slaughtered. "His little head was chopped off, and the body remained in the mother's lap."

An Obligation to Prevent Genocide

The prosecutors are convinced that the Dutch soldiers were criminally negligent when it came to fulfilling their duty to secure the UN-protected zone. As a result, the suit alleges, they "handed over the population to the bloodthirsty Bosnian Serbs." The suit has gained impetus from a decision handed down in February by the International Court of Justice, under which states are obligated "to prevent genocide." The Dutch state played a "controlling role" in the UN peacekeeping mission, says attorney Hagedorn, "and for that reason it must now be held liable for the dramatic consequences."

The fact that the Amsterdam attorneys are also taking aim at the United Nations is even more relevant for international law. The UN generally enjoys immunity so that it can fulfill its goals. But, the plaintiffs say, that immunity can no longer apply in this case. According to the plaintiffs, the UN approved the Bosnian mission in a number of resolutions and executed it with the help of UN peacekeepers. It would be an unacceptable "concentration of power," says Hagedorn, "if it cannot even be monitored by the courts anymore."

Even more important, say the plaintiffs' attorneys, is the fact that the UN's immunity was established so that it could pursue its humanitarian goals worldwide. But, says Hagedorn, he cannot imagine "that the UN sees genocide as part of its purpose."

Translated from the German by Chris Sultan.