The doorbell rang around half past one in the morning. Through a window, Laura Rodríguez saw blue lights and police boots, and she was afraid as she opened the door. Two men in full-body protective gear stood before her. "Your husband’s COVID test was positive. You need to come with me,” they told her.

The family had 15 minutes to pack their belongings. Rodríguez woke up the children. Her son, Augustín, 7, began crying. Her daughter, Matilda, screamed when they put her father in an ambulance and drove off. Rodríguez and the children had to get into a police van.

For three hours, the van drove around the city, collecting members of other families that had had contact with someone infected with the coronavirus. Rodríguez, 42, and her children were tested in a center and then, around 6 o’clock in the morning, they were brought to a school that had been turned into an "isolation center.” "The first thing I had to do was sign a statement that I was there of my own free will,” Rodríguez, a psychologist, explains. "I signed so that the children could finally sleep.”

What happened to the Rodríguez family, from the Argentinian city of Formosa, on January 19, 2021, sounds like it could be a scene from a horror movie. But about 25,000 people in the Argentinian province have had similar experiences since April 2020. Rounded up by police and taken to quarantine centers.

Those who had tested positive for COVID-19 have been packed together with suspected cases in catastrophic hygienic conditions. Children and families have been forced to sleep in close quarters with adult strangers, sometimes in overcrowded buildings with bunk beds, including sport stadiums and tent cities.

Many were forced to spend over 14 days there, and some were kept in the dark about their test results. Many, it can be assumed, were infected in such facilities. Social and media pressure has led to the closure of the worst centers and the softening of some of the most egregious "abusive measures,” says José Miguel Vivanco, Latin America director at Human Rights Watch (HRW). But, he adds: "This is an ongoing problem.”

At the start of the pandemic, Formosa, a poor province in northern Argentina, established some of the strictest coronavirus rules in the world: in addition to forceful measures, like sealing off the province from the rest of the country, residents have been living in a far-reaching permanent lockdown with a curfew enforced by the police. "We have effectively been in phase one for a year,” says radio journalist Julieta González. "The family farms are dead. Poverty is extreme, and only big supermarket chains have survived.”

The provincial government even created something like new borders: The city of Clorinda on the border to Paraguay was closed off completely for months. Doctors report that, at times, people were not even allowed to travel for necessary medical treatment and mothers were separated from their newborn babies if their infants had to be treated in the capital.

Political scientist Julio Burdman describes the regional government’s strategy as a "Chinese approach.” Officials defend themselves by pointing to the low number of COVID-19 deaths, supposedly only 151 since the start of the pandemic. Over 64,000 people have died in the country overall. But doctors from the region argue that the figures from Formosa are manipulated and are actually much higher.

On that Tuesday morning in January, Rodríguez and her two children were assigned room 10 in the converted school: four beds along with a packet of toilet paper and cleaning supplies. They were not allowed to enter the courtyard and a policeman kept watch so that they did not leave their room without permission. They had to share the bathroom with 30 other people and clean it themselves. "It was incredibly dirty, the toilets were overflowing, there were cockroaches everywhere,” Rodríguez says. Neither the bathroom nor the bedroom could be closed, she says. "I showered the kids every night at 11:30. We were scared. I didn’t know who the other 30 people were.”

After three days, Rodríguez and her children received a negative test result, but they had to remain isolated for another 10 days. "Quarantining at home was not allowed,” she says, "but we couldn’t stay at the center.” Rodríguez moved the children to a hotel, paying not only for the room, but also for the police officers who watched over them. "I was able to afford this expensive stay and I can assert myself,” she says. But she says others were traumatized and have "experienced cruel disregard for their privacy and rights.”

Human Rights Watch takes a similar view, speaking of "arbitrary detentions” and of people who were held for up 30 days or longer. One case, that of Zunilda Gómez, a pregnant woman who was locked in a hotel room with her three children, received particular attention. When she suddenly started bleeding, nobody responded to her cries. Finally, her daughter climbed out of the window to seek help. The mother suffered a miscarriage in the hospital, while her children remained locked alone in the hotel room until the next morning.

"I supported my patients in their decision not to get tested,” says physician María Paula Zarza, from the especially hard-hit city of Clorinda, "even if they had symptoms.” She says patients asked about the consequences for them and their families. She explains that because the testing system is under government control, if someone was positive, the result would be forwarded to the police. "Those infected with corona are criminalized.”

Freedom of expression is also restricted in the province, with journalists complaining that their reporting is being suppressed. Julieta González, who works for an independent radio station, is not allowed to enter the quarantine centers or attend government press conferences. The 26-year-old says men on motorcycles follow her around after she finishes work and photograph her, and that she was arrested by the police during a protest against the disease-control measures. She receives threats by mail and by phone: "We will infect you and carry you away in a black bag.”

On January 27, the human rights commissioner of the central government in Buenos Aires visited the province. Several especially desolate isolation centers were closed and the quarantine rules were changed so that infected people and suspected cases are now housed separately. Those with young children or people over the age of 60 can isolate at home. "Quarantine at home is only allowed if the home meets certain standards,” says Vivanco of Human Rights Watch, adding that those standards are rarely met in poorer neighborhoods. He says families are still being locked up in the centers. "I don’t think the central government in Buenos Aires has a strong interest in changing the situation in Formosa,” Vivanco says.

The governor of Formosa province, Gildo Insfrán, has been in power for about 25 years and is part of the Peronist Judicialist Party, like Argentina’s president, Alberto Ángel Fernández. "The opposition wanted to exploit what was happening in Formosa,” says Burdman, the political scientist, "which led to the subject being strongly politicized.” While the central government did not want to support the governor, it also didn’t want to denounce him.

As on the rest of the continent, the number of coronavirus infections in Argentina recently rose sharply, and the country is now at the peak of its second wave. President Fernández, who focused on sealing off his country from the outset and imposed tough lockdown measures – and was admired early on as a kind of rational antithesis to Brazilian President Jair Bolsonaro – has since come under criticism. "At first it looked like Argentina was doing everything better than the other countries in the region,” says Burdman. "But the bubble burst quickly.” The economic situation has grown increasingly disastrous, the population more dissatisfied.

In Formosa, the case numbers are also rising rapidly, and the isolation centers are still in operation. Recently, an older woman died in one of the centers – a woman who had diabetes and, according to the news site Prensa Libre, had been refused medical help. "They discharged her from the hospital and, after she tested positive for COVID, they took her to the isolation center and let her die,” says González, the journalist.

She says people send her photos from the centers almost every day, showing mattresses on the floor, a snake in the shower, maggots in the food. DER SPIEGEL was unable to verify these photos. HRW and other human rights groups have not been granted access to the province thus far.

Burdman believes the governor’s actions are not part of a cunning strategy to grab more power under the guise of controlling the pandemic, but rather "bad decisions made out of panic over the possible collapse of the healthcare system.”

Zarza, the physician, nevertheless argues that the regional government has created "an authoritarian, bureaucratic nightmare that especially affects the poor.” She is a family doctor who primarily cared for indigenous communities in the poorest neighborhoods of the largely sealed-off city of Clorinda. She has now given up her job in the public health system and left the province. "What the state was asking of me,” she says, "was unethical and contradicted my principles as a doctor.” 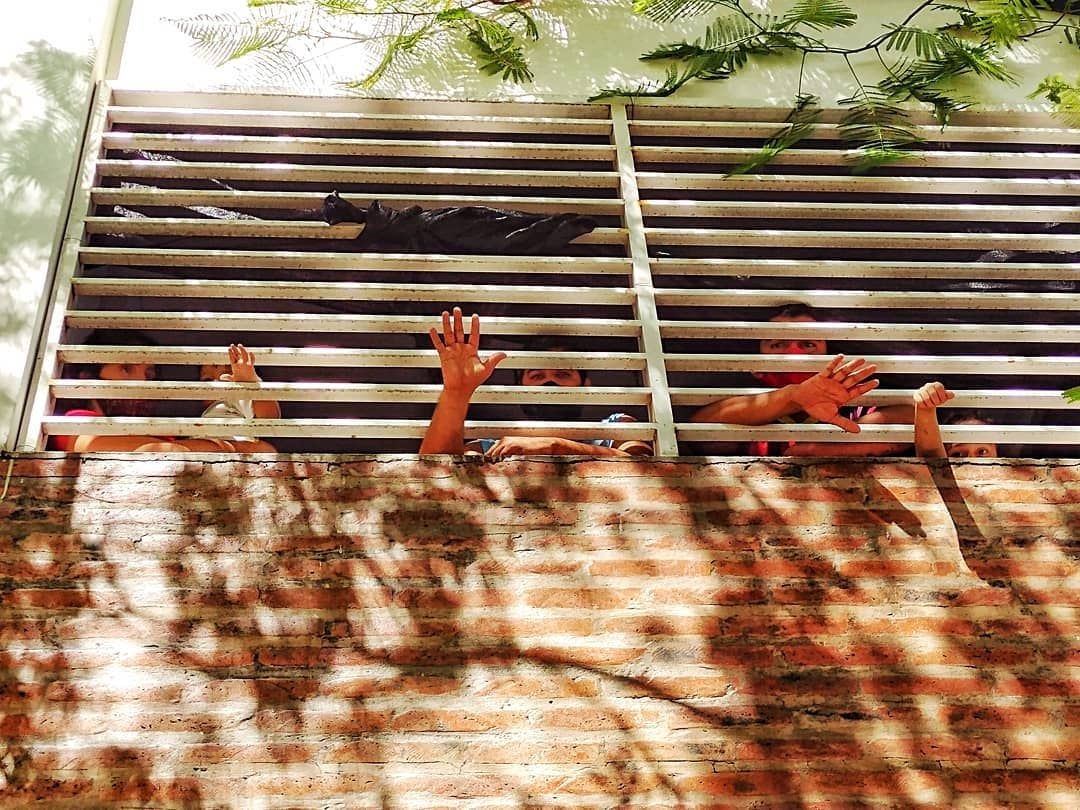 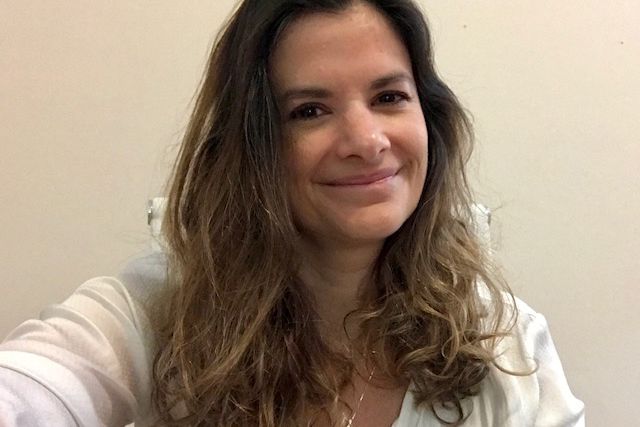 Laura Rodríguez was brought to an isolation camp with her children. 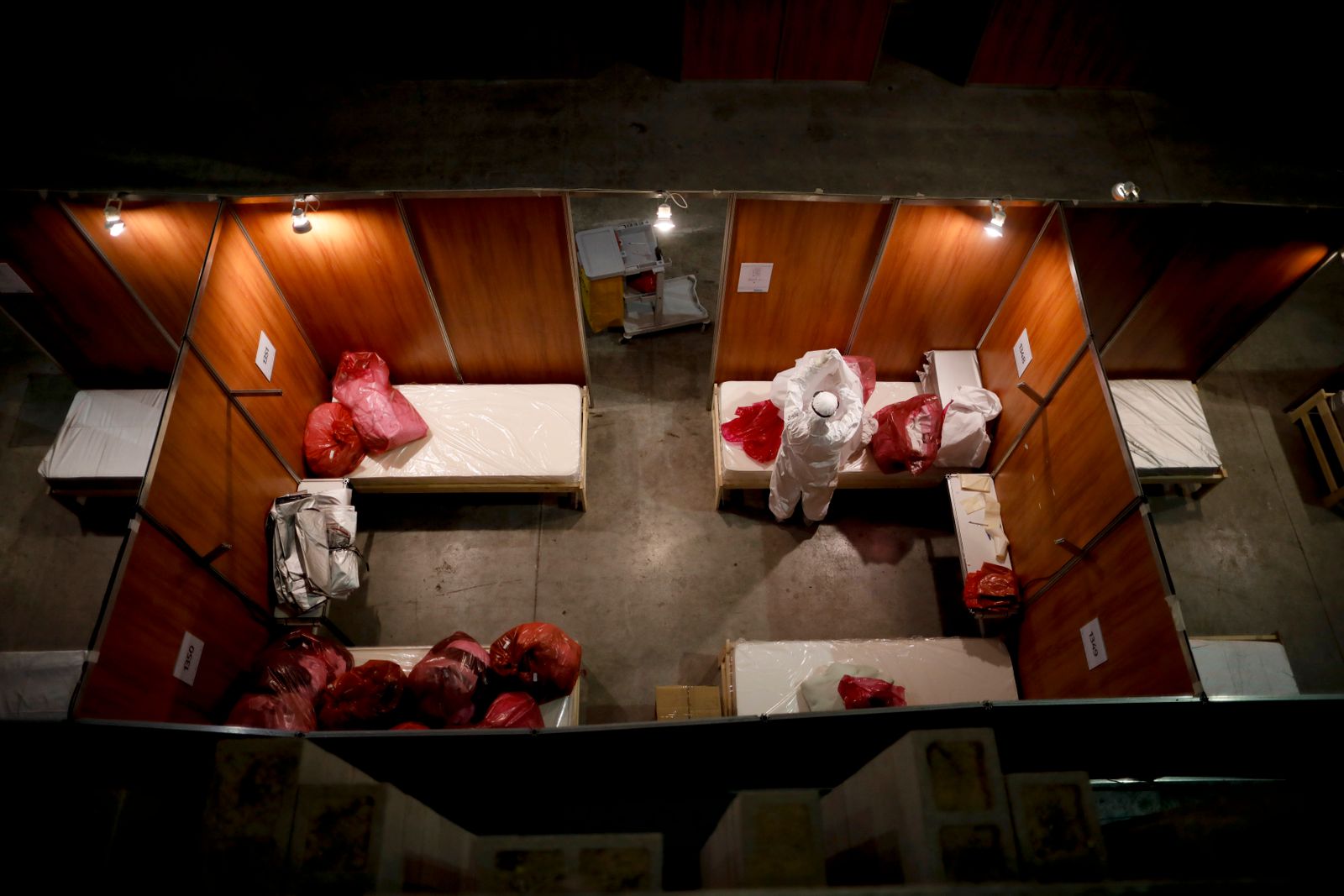 A quarantine center in the Argentinian capital of Buenos Aires 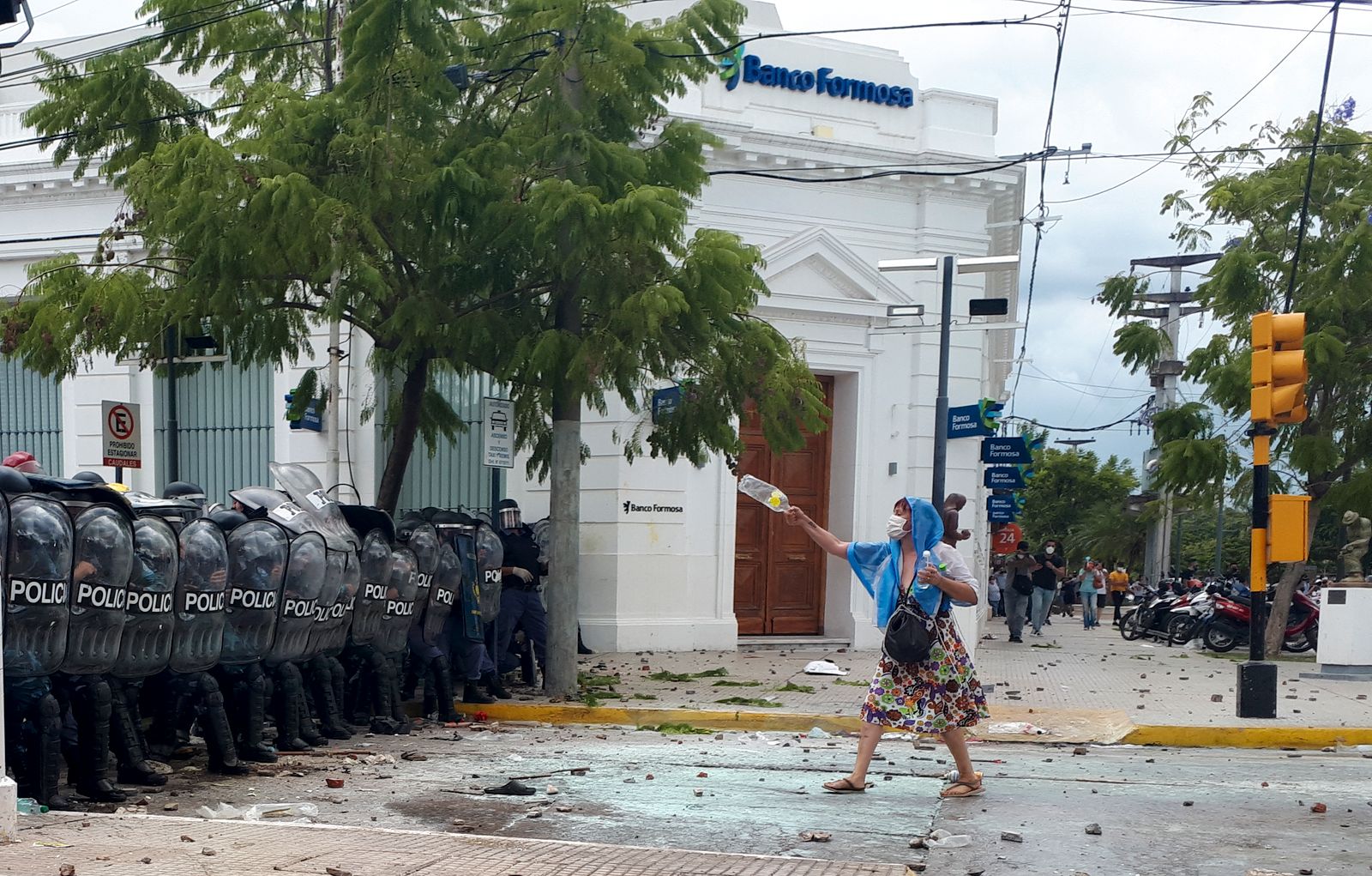 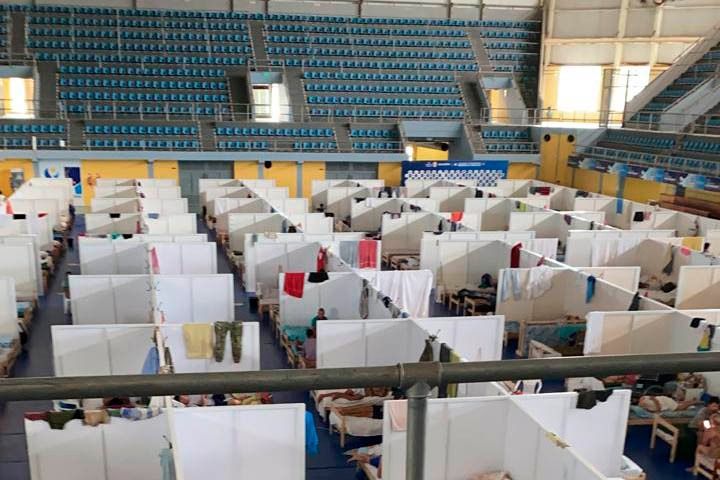 This isolation center in the Argentinian province of Formosa has now been closed. 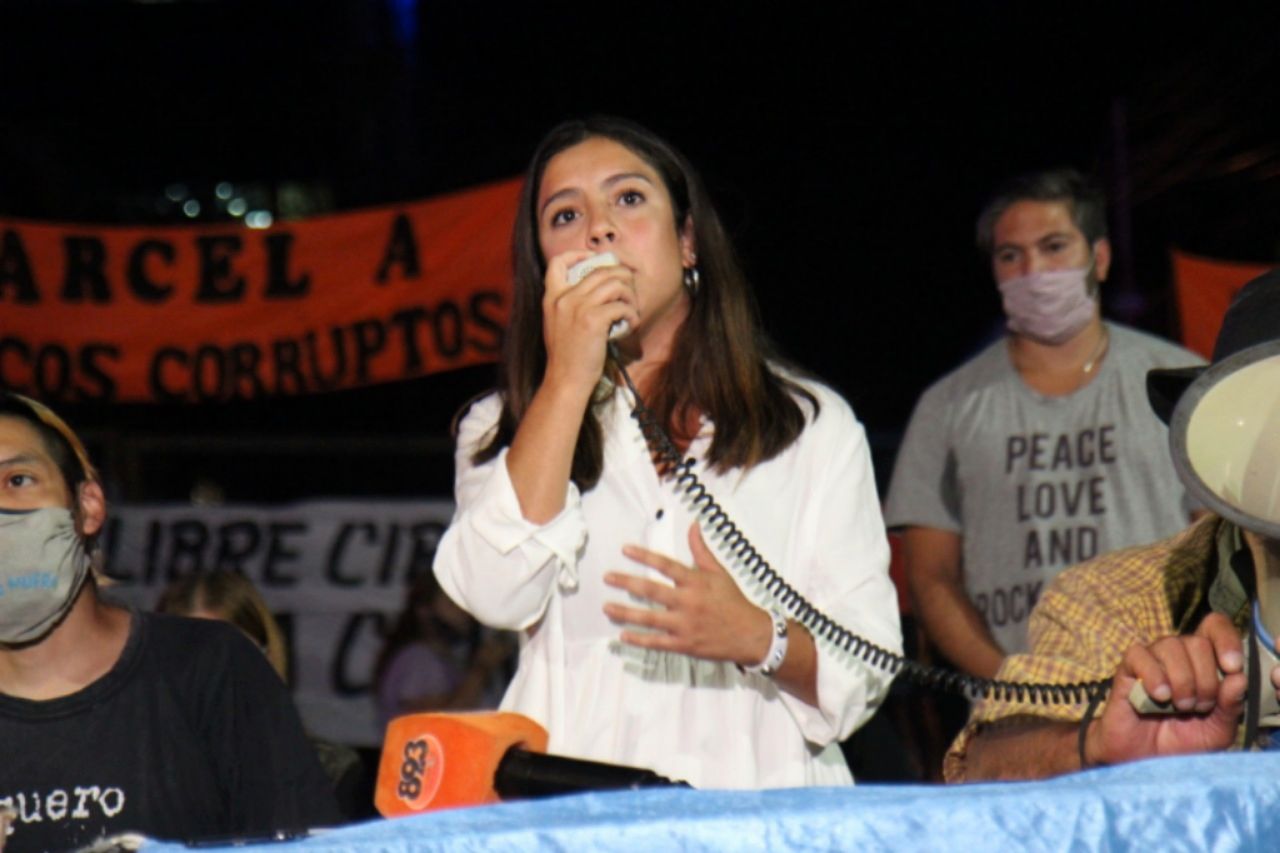 Journalist Julieta González at a protest in Formosa 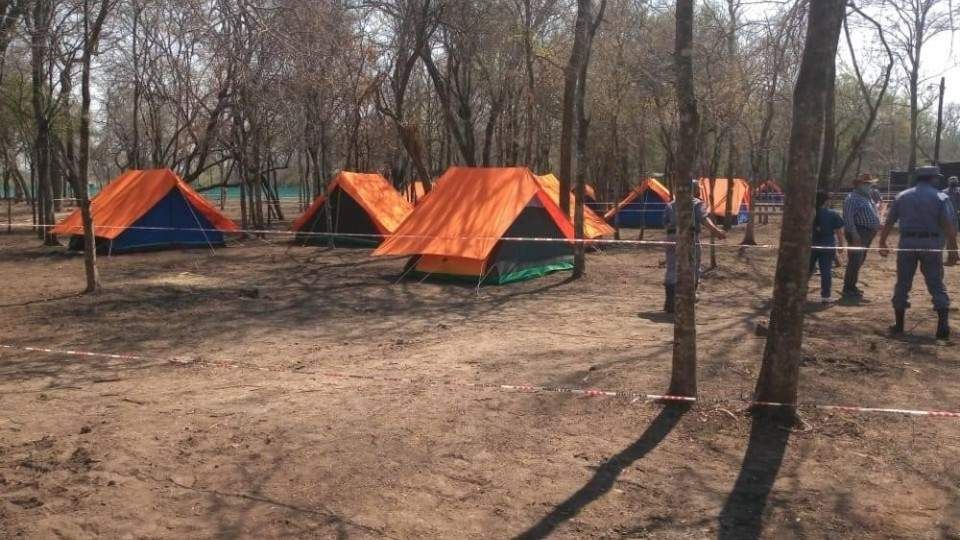 This tent city in the Argentinian province of Formosa has now been closed. It served as an isolation center for those infected with the coronavirus, especially from poorer areas.