Iceland's president has done what the island nation's parliament and government didn't dare to. He said "no" to British Prime Minister Gordon Brown and Dutch Finance Minister Wouter Bos regarding repayment of his country's debts. As a result, the morality police in the Netherlands have been lashing out forcefully. How dare Iceland try to sneak away from its obligations? On Dutch television Bos threatened an European Union boycott and an International Monetary Fund (IMF) blockade. And Age Bakker, a Dutch executive director of the IMF, announced that all aid already committed to Iceland would be delayed.

Most know the back story: Lured by higher interest rates, tens of thousands of Dutch citizens lodged their savings with Icesave bank in Iceland, the online subsidiary of the parent bank, Landsbanki. The money was wiped out in the crash of Iceland's banking system. The country had a deposit-insurance fund but this could not cope with the collapse of the entire banking system -- which meant that its guarantee of up to €22,000 (approximately $31,900) per deposit proved useless. So Bos decided to pay out on Iceland's guarantees, returning the money Dutch citizens had lost, up to a total of €1.3 billion. The Dutch central bank also covered deposits above €22,000 with an initial limit of €40,000 which later rose to €100,000.

Brown and Bos thus saddled Iceland with additional foreign debt. This amounts to 40 percent of the comparatively small nation's gross domestic product. And it was done before anybody even checked whether, legally, the country was really obliged to reimburse Dutch savers.

In fact, that remains unclear. Bos alleges Iceland infringed EU regulations on deposit insurance even though the regulations he cites actually say nothing clear on the subject. The guidelines that were applicable then only state that a deposit-guarantee system must be in place with "sufficient resources" to cover deposits. It doesn't say what happens if a major financial calamity wipes out the fund with "sufficient resources." Nor does it say anything about who pays for the central banks' top-up, only that different countries must agree on that with a bilateral treaty. The Netherlands has no such bilateral treaty with Iceland. Which is why one can conclude that the parliamentarian, who called for legal steps to be taken to enforce repayment, is just displaying his own ignorance. There is no legal basis for this claim.

No Need for Bos' Drastic Actions

The Netherlands' chattering parliamentarians have not asked if Bos was allowed to take the action he did either. He bears no responsibility for individual savers or the private banks. His role is to ensure the stability of the Dutch banking system. And that was not endangered by the Icesave debacle. Which means there was no need for his actions, no budgetary mandate and additionally, no prior consultation with parliament. A total of €1.3 billion was just thrown away.

So how can we proceed? Iceland currently has an external debt that amounts to between 300 and 900 percent of its gross domestic product! The Third World debt crisis of the 1980s taught us how to deal with over-indebted countries. The Brady Plan which was developed to deal with this, involved discounting the debts owed by countries like Mexico. At the time Mexico's commitments amounted to 60 percent of the country's GDP -- which is why Mexico was considered unable to pay. Nicaragua owed ten times its GDP in debt. This too has never been repaid. Basically, foreign debt that equals three or four times the national GDP cannot be repaid -- and therefore will not be repaid, whether the president commits to repayment or not.

Additionally the experience in Mexico indicates how wrong predictions about Iceland becoming a pariah probably are. After Mexico had negotiated a 40 percent cut in its foreign debt, capital flowed into the country. In fact, that happened in all countries in the Brady Plan. And it's logical. Payment of such gigantic debts requires extremely high taxation, which chases away investors and leads to zero growth for decades. If this happens to Iceland, the country will be trapped in a vicious cycle of high debt, high taxation, low growth, low payment capacity and thus even more debt. This situation is described as a "debt overhang."

Demanding full repayment in such circumstances just leads to turmoil and creditors end up with less than if they had been more modest in their demands. Moreover, creditors should not act in isolation. The international community should not permit Bos and Brown to insist on being paid before any other creditors. Someone -- the Scandinavians perhaps? -- should be coordinating all the various creditors.

Statements Negative for the Dutch and for the IMF

Additionally, the remark by the Dutch IMF Director Bakker -- in which he indicated that Iceland's debts to the Netherlands and to Britain could endanger the IMF aid program --was extraordinary. That's not his decision to make. It is the IMF board's decision. And the institution has to remain above the interests of individual parties. It's unheard of for one director, with an obvious conflict of interest, to pre-empt that process. This will have negative consequences for the Dutch position within the IMF, and even for the IMF itself.

Iceland has to sell the banks that were nationalized so as to clarify how much it still owes. It has to be established exactly how much of Iceland's debt should be discounted to allow new growth so that the country can repay the rest of its obligations. Stringent fiscal measures will have to be undertaken to convince creditors problems will not re-emerge. With such a restructuring and adjustment process, Bos will get much more for his money than he ever would have with his current macho posturing. 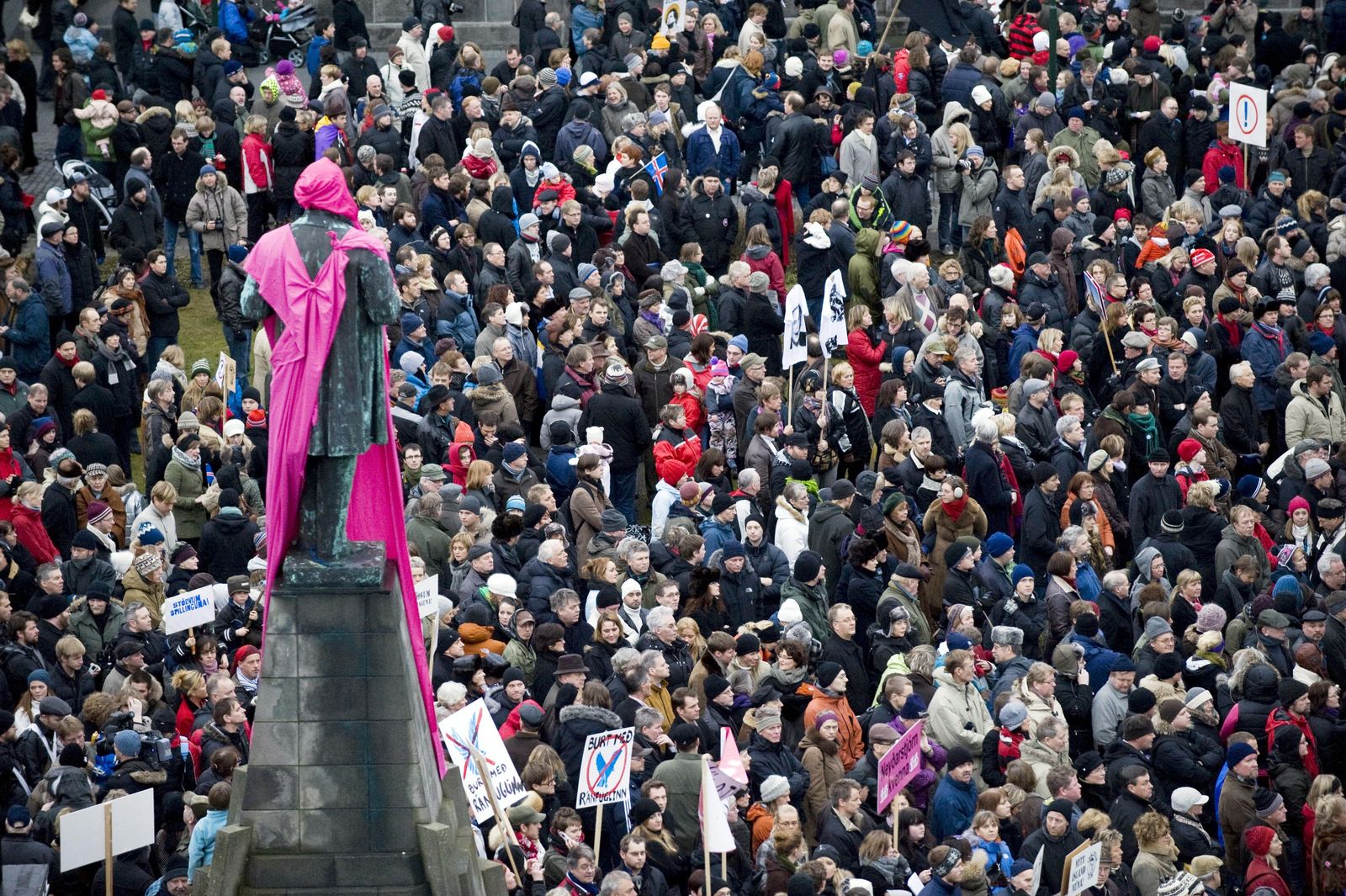 A protest in Reykjavik in 2008 over the IMF bailout of Iceland's financial system.