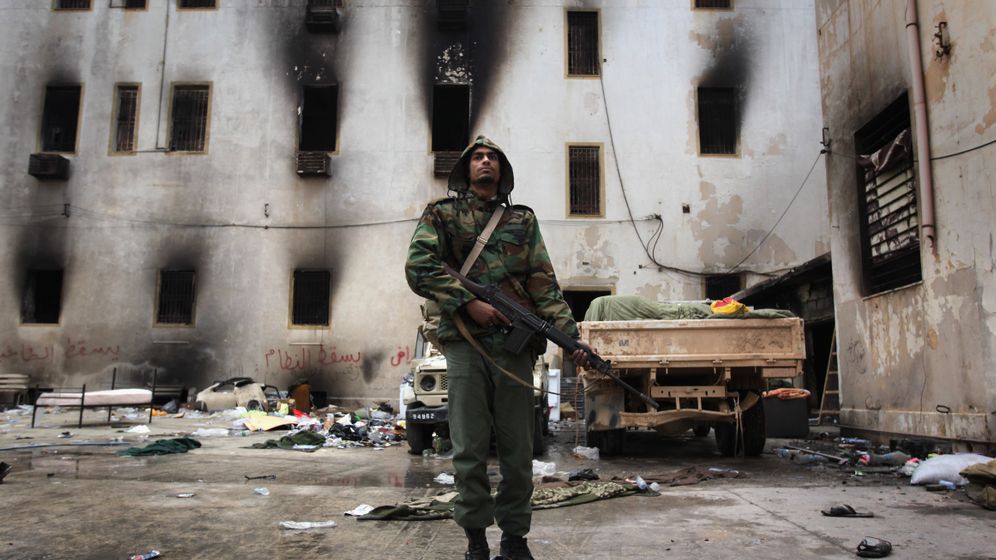 The European Union is finally set to take action on Libya. With the violence in the strife-torn country showing no signs of abating, EU members have agreed on a package of sanctions against Moammar Gadhafi's regime. They include a weapons embargo and a ban on the export of goods which could be used to repress the Libyan people. There will also be a freeze on assets belonging to Gadhafi and his family, who will also be the subject of entry bans. It is expected that the formal decision to approve the sanctions will be taken early next week.

German Foreign Minister Guido Westerwelle (FDP) had earlier promised a swift resolution on sanctions. "The time for appeals has passed, now there will be action," he announced after talks with his Italian and Moroccan counterparts, Franco Frattini and Fassi Fihri, in Berlin. Westerwelle also refused to rule out further sanctions, although he dismissed reports of plans for military intervention in Libya.

EU foreign policy chief Catherine Ashton had said earlier on Friday that the bloc needed to consider sanctions to achieve a halt to the bloodshed. "For the EU it's time to consider what we call restrictive measures ... to ensure we put as much pressure as possible to try and stop the violence in Libya and see the country move forward," Ashton said.

Speaking at the start of a meeting of EU defense ministers, Ashton said that there had been no discussions so far on any "military actions around Libya" and that the EU was looking to the lead of the UN Security Council in the crisis.

French Foreign Minister Michele Alliot-Marie said France and the UK will press the Security Council for sanctions against Libya and a war crimes investigation by the International Criminal Court. "There is a French-English project ... we have asked for a resolution on a total arms embargo, sanctions and asking the ICC to proceed over crimes against humanity," Alliot-Marie told France Info radio. The measures could include financial sanctions and travel bans, she said.

The French president, Nicolas Sarkozy, joined the calls for the Libyan dictator to step down. "Mr Gadhafi must leave," he told a news conference with his Turkish counterpart Abdullah Gul. "Regarding a military intervention ... France would consider any initiative of this type with extreme caution and reserve," he said.

A Crisis in the Neighborhood

NATO Secretary General Anders Fogh Rasmussen called an emergency meeting on Friday to discuss the situation in Libya. Rasmussen was due to return to Brussels from a visit in Budapest on Friday for the meeting. He described the deteriorating situation in Libya as "a crisis in our immediate neighborhood," and said that although there were no plans for military intervention, the resources were in place.

"It's a bit premature to go into specifics but it's well-known that NATO has assets that can be used in a situation like this," he said. "NATO can act as an enabler and coordinator if and when individual member states want to take action."

The United States said it was looking at all options, including the enforcement of a no-fly zone over Libya, and did not rule out military action.

There were some calls for immediate action, however. The UN's top human rights official said reports of mass killings in Libya should spur the international community to "step in vigorously" to end the crackdown against anti-government protesters in the North African country. UN High Commissioner for Human Rights Navi Pillay said, "the crackdown in Libya of peaceful demonstrations is escalating alarmingly with reported mass killings, arbitrary arrests, detention and torture of protestors."

But even as the West is trying to arrive at a common position with regards to the violence in Libya, governments in both the US and Europe are doing what they can to evacuate their citizens from the troubled country. British Defense Secretary Liam Fox on Friday said Britain had been discussing with the NATO leadership how better to coordinate efforts to get people from a number of different countries out of Libya over the next few days.

In Brussels, senior officials said the EU was weighing up a range of options to evacuate more than 5,000 Europeans, many of them oil company employees, and said one possibility was a military humanitarian intervention force. A British warship left Libya on Friday carrying more than 200 evacuees. The HMS Cumberland left Benghazi with Britons, French and Canadians on board. The German navy has sent three ships to the waters off Libya in an effort to evacuate the 160 Germans left in the country.

Hundreds of foreigners, including scores of US citizens, had been stuck in Libya for the last several days as high seas prevented departure. On Friday, however, the ferry carrying 300 passengers, of who half are Americans, according to the US State Department, was finally able to leave for Malta.

Tens of thousands of other foreigners are likewise trying to flee the chaos in Libya, with thousands of Turks and Chinese scrambling aboard ships sent to evacuate them. Guest workers from neighboring countries such as Egypt and Tunisia have likewise been pouring across the borders out of Libya.

Greece had to overcome serious hurdles to obtain landing clearance to evacuate 230 Greeks from Libya to Athens early Friday. "It was total chaos on every level, and quite troubling for the people involved. But we got our people out," said Greek Deputy Foreign Minister Dimitris Dollis, who traveled to Libya to coordinate the effort. "It took us three days just to get clearance to land (in Tripoli and two regional airports). It's difficult to get permission when no one is running the country."

Turkey has so far evacuated nearly 8,000 of its 25,000 to 30,000 citizens in Libya, most of who work on construction projects, while thousands of Chinese are also fleeing the country. China announced it was sending a navy ship to protect its citizens during the evacuation, while Indonesia said it was also preparing to help its people leave the country.