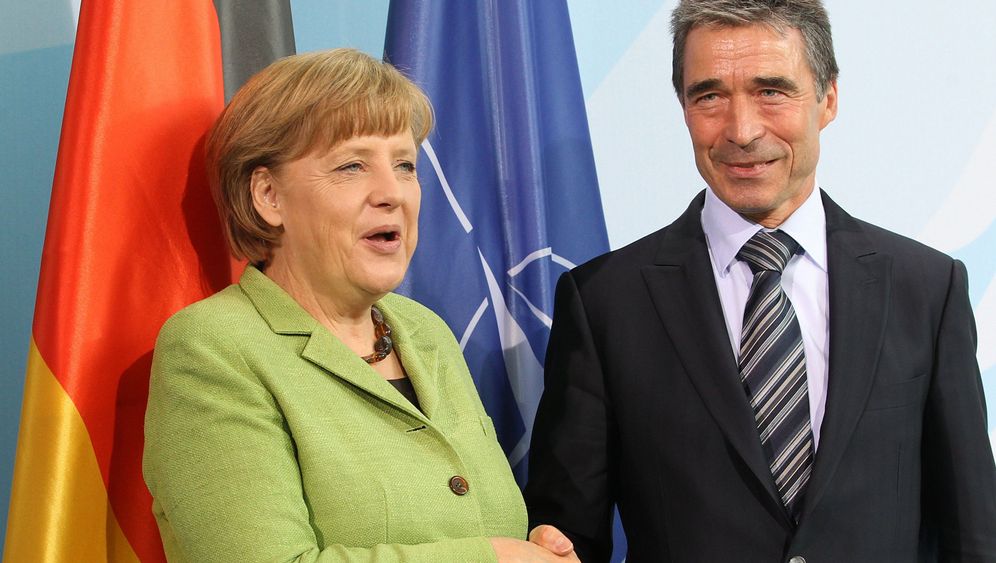 Photo Gallery: Germany Isolated in NATO Ahead of Summit

When the 28 ambassadors of the North Atlantic Council came together at NATO headquarters in Brussels on Wednesday of last week, a key diplomat was missing. The German ambassador to NATO, Martin Erdmann, had suffered such a bad fall in his residence on Avenue de Tervueren the previous day that doctors had to stitch up his lip.

His fellow ambassadors sent him their get-well wishes. But they managed to contain any disappointment over the fact that the German representative had been left speechless during this important phase of preparations for the NATO summit in Chicago on May 20-21.

As it happens, the German ambassador usually says very little, even when he is present. And what should he say, given that his government hasn't even formed an opinion on a range of important issues yet?

The taciturn diplomat is symptomatic of the difficult relationship between the Germans and the Western alliance. Two decades after the end of the Cold War, the country still hasn't found its role in a changed NATO. The full sovereignty on issues of foreign policy that Germany regained after reunification is almost as much of a strain for the current center-right government as it was for the two previous coalition governments.

No one can complain as eloquently about this state of affairs as Defense Minister Thomas de Maizière. In his speeches, the conservative Christian Democrat politician often mentions Germany's "fear of its own strength," which, as he says, was a welcome excuse for the Germans' tendency to hold back on important issues after reunification, especially "when it was time to make their own concrete contributions to security policy."

The minister's speeches attracted some attention at NATO headquarters in Brussels, and yet his words have not been followed by actions. Officials at the nerve center of the Western defense alliance have even coined the term "Germany feeling," to express the notion that everything Germany does for the alliance is either "too little or too late."

'The US Doesn't Perceive Us As a Player'

The Germans are no longer being as rudely berated as in 2006, when a member of the British House of Commons, speaking at a meeting of NATO parliamentarians in Quebec, sharply criticized the Germans' role in Afghanistan, saying: "Some drink tea and beer, while others risk their lives." That rage has now given way to deep resignation. "The United States doesn't even perceive us as a player anymore when it comes to security policy," says a staff member at the German Embassy in Washington.

Germany is now being more or less subtly harassed. Last November, NATO Secretary General Anders Fogh Rasmussen suddenly slashed funds that had been long approved for a conference organized by the German Institute for International and Security Affairs (SWP). It was a deliberate insult.

"Recently, Germany has satisfied neither the expectations of the alliance partners nor its own self-image as a medium-sized military power with global responsibility," says SWP expert Markus Kaim.

The conflict fundamentally revolves around "burden sharing" within the alliance. Because all NATO countries have to economize, military capabilities are to be "pooled and shared." The member states aim to celebrate the approach, known in NATO parlance as "smart defense," in Chicago.

But a military division of labor only works if all parties can trust one another. NATO must be able to completely rely on the fact that the partner countries will also make their promised capabilities available, said Canadian Defense Minister Peter MacKay at the Brussels meeting. It was a criticism aimed primarily at the Germans.

Ever since the Germans chose to abstain from voting on the United Nations resolution on Libya, the allies have had growing doubts about their reliability. Shortly after the vote in the UN Security Council, German Defense Minister de Maizière had the German soldiers removed from the AWACS aircraft monitoring the no-fly zone over the North African nation.

Germany lost its credibility as a result, says a general with the German armed forces, the Bundeswehr. "Pulling out our soldiers from a multinational project like AWACS, especially when we were in charge, was a sign of a lack of solidarity. That won't be forgotten, not even in a few months." Germany, he adds, shouldn't even bother to propose any new multinational projects.

Since then, the defense minister has described another cooperation project as an "acid test" for the alliance. But his words were a little premature, as became clear last week when the budget committee of the Bundestag, the lower house of the German parliament, refused to approve the German share of a joint purchase of "Global Hawk" drones that were to become part of a new ground reconnaissance system.

"Under such conditions, pooling and sharing is either doomed to failure, or it remains limited to the few nations -- like France and Great Britain -- that are both willing and able to cooperate," writes Karl-Heinz Kamp of the NATO Defense College in the German-language Journal of Foreign and Security Policy (ZfAS).

Christian Mölling of the Institute for International and Security Affairs believes that the argument is a pretext. "The Bundestag has never rejected or refused to extend a mandate." The government, he adds, is only too happy to use the requirement of parliamentary approval as an excuse for its lack of commitment.

The truth is that the Germans have a limited interest in assuming a key role within NATO. Berlin already lacks the will to staff senior positions with Germans. "It would be desirable if Germany could have more influence in this regard," says Roderich Kiesewetter, a foreign-policy expert in the CDU parliamentary group in the Bundestag.

While other nations fight to place their own people in key positions at NATO, the Germans look on as they lose one position after another. In August, the German head of the Public Policy Division will leave her post, and yet there was no objection from Berlin over the fact that Germany will be giving up one of the top civilian jobs at NATO.

Berlin is also expected to lose the position of deputy commander of the Allied Air Command in Ramstein in southwestern Germany. This, says a senior Bundeswehr officer, can clearly be interpreted as "payback for Libya."

Even Defense Minister de Maizière's reform of the Bundeswehr shows that the German will to share the burden at NATO is limited. Despite the pressure to cut costs, the Bundeswehr is retaining all of its military capabilities, including submarines, mine defense and air transport. The SWP's Christian Mölling believes that the minister is missing an "historic opportunity," turning the Bundeswehr into a bonsai army, one that covers the entire spectrum of capabilities but has virtually no military clout anymore. This is cause for concern among Germany's allied partners.

In January, representatives of the NATO member states attended the traditional Defense Planning Symposium at the NATO school in the Bavarian town of Oberammergau. The figures that German Brigadier General Ansgar Rieks presented to the partners were greeted with amazement. The attendees wanted to know why, after completion of the Bundeswehr reforms, only 10,000 of up to 185,000 German troops are to be available for foreign missions.

Although many of the alliance's strategic decisions are shaped by the national egos of individual countries, German interests have all but disappeared in the alliance. This is because the Germans themselves cannot define what their interests are.

"There is a lack of fundamental understanding of security policy within the general public," says Patrick Keller, an expert on security policy at the Konrad Adenauer Foundation, which is linked to the CDU. To move forward, the purpose of NATO must first be explained to the German people, he says. When he takes part in discussions in Germany, Keller routinely has to explain to Germans why their country needs soldiers in the first place.