Editor's Note: SPIEGEL ONLINE has also posted a companion interview to this story with David House of the Bradley Manning Support Network, a group campaigning on behalf of the alleged WikiLeaks whistleblower.

When 23-year-old IT specialist David House visits his friend, he can hear him before he sees him. The shackles on his feet make a clanging and dragging noise across the prison floor as the young man is brought to the glass-enclosed room where he sees visitors.

The prisoner House visits regularly at the military prison in Quantico, Virginia has probably divided public opinion in the United States more than any other inmate. For some, presumed WikiLeaks source Bradley Manning, also 23, is a hero who deserves medals and honors. For others, he has committed a breach of secrecy that deserves the most severe punishment.

Even before an indictment has been filed against Manning, the dispute over the prisoner is coming to a head. At issue are the conditions of his detention. Manning has now written an 11-page complaint that raises significant questions about the way he and his case are being handled -- questions addressed to the military and to its commander-in-chief, President Barack Obama.

Before he was inaugurated, Obama talked about the importance of whistleblowers, or sources who expose abuses within their organizations. Such "acts of courage and patriotism" ought to be "encouraged, rather than stifled," his website read at the time.

Once in office, Obama underwent a radical shift. His government is currently taking legal action against a number of whistleblowers. The government apparently wants to use the Manning case as a deterrent.

Manning is accused of being the source of the massive store of documents the website WikiLeaks used last year to expose the US military and later the . He was arrested in late May and has been in a maximum-security brig in Quantico since July. Friends and supporters had already described the previous conditions under which the 23-year-old soldier was being held awaiting trial as torture. An expert with the United Nations has already launched an investigation.

Manning spends 23 hours a day in a small isolation cell. During the exercise hour to which he is entitled, he is taken to another room and allowed to walk around. "Bradley seems less able to concentrate and is losing physical strength from one visit to the next," says House, who last visited Manning on March 5.

On the previous Wednesday, the military had filed 22 new charges against Manning. Investigators have now charged him on 34 counts, including theft and the disclosure of secret military information. The first of the charges, "aiding and abetting the enemy," seems to be the most dangerous for Manning, because it is punishable with the death penalty. On the day the new charges were filed, the commander at Quantico tightened the conditions of detention once again. Manning was now forced to sleep without clothing and stand naked in front of his cell door for inspection in the morning -- another act of harassment that is only being applied to Manning at Quantico.

In the complaint he drafted with his civil defender, David Coombs, Manning cites conditions of detention that he believes constitute what US law defines as "pre-trial punishment."

Manning argues that although it was understandable that he was initially classified as a maximum-security prisoner, the decision by prison management to keep him in this status -- after the prison psychologist had recommended downgrading the status almost weekly since last summer -- was "an abuse of discretion." According to the more than 30 entries into the prison log that Manning cites in his complaint, he causes "no problems" and is "an overall average detainee." "I am being treated differently from any other detainee at the Quantico Brig," Manning writes.

Manning also objects to his clothing being taken away from him at night. The harassment, he argues, stems from a conversation in which he said, "out of frustration," that if he wanted to hurt himself he could do so "with the elastic waistband of my underwear or with my flipflops." The removal of his clothing, according to Manning, is "clearly punitive in nature" and violates the Eighth Amendment of the United States Constitution and its ban on cruel and unusual punishment, even though he is now permitted to wear a smock-like garment at night.

The new conditions of Manning's detention have also given rise to critical voices among US politicians. "This is Abu Ghraib, except this is on US soil," said Democratic Congressman Dennis Kucinich. "This is an obviously calculated, cruel attempt to inflict upon Private Manning a level of punishment … to break him mentally." Kucinich said that he expected President Obama to not simply stand on the sidelines. "This is repugnant. At some point, the commander in chief, who is the president, will have to step in."

Even Secretary of State Hillary Clinton's chief spokesman, P.J. Crowley, described Manning's treatment on Friday as "ridiculous and counter-productive and stupid on the part of the Department of Defense."

The spokesman stepped down abruptly only two days later because of his comments and many are suggesting he was pressured to do so by the White House. Asked at a press conference on Friday about Crowley's remarks, President Obama said he has asked Pentagon officials "whether or not the procedures that have been taken in terms of (Manning's) confinement are appropriate and are meeting our basic standards." He said those officials "assure me that they are."

US legal experts are also openly criticizing the handling of the soldier, particularly as a future indictment of Manning could be on shaky ground. Manning's pretrial detention has already been unusually long for a military case. A date still hasn't been set for the expected military tribunal against the soldier.

The military prosecutors will have trouble substantiating the charge of "aiding and abetting the enemy." To do so, they will have to officially define WikiLeaks as the enemy or claim that the leaks somehow helped the Afghan Taliban. This, however, would be a charge that could be equally applicable to the media organizations like SPIEGEL that published the WikiLeaks documents. Such a charge would hardly be compatible with the First Amendment to the Constitution, which guarantees the freedom of the press in the United States.

One of the prosecution's key arguments will probably be a computer chat session in which a user with the alias "bradass87" admits having obtained the material and passed it on to WikiLeaks. The use of a chat as a central piece of evidence would be unprecedented in US legal history for a case of this magnitude. Aside from the fact that the prosecution would first have to prove that "bradass87" was Manning, the author of the chat also comments at length on his motives for stealing the data, making it clear that they are political. The documents in question, "bradass87" wrote in the chat, which the recipient passed on to the FBI, consisted of "public information" disclosing aberrations that included the criminal activities of military officials and diplomats.

In using this language, the WikiLeaks source described himself as someone to whom all of the characteristics of a whistleblower apply. There is a famous precedent in which a similar whistleblower went unpunished. In the 1970s, when the administration of then President Richard Nixon tried to secure a conviction against the New York Times and its source in the Pentagon Papers case, Daniel Ellsberg, it failed. Today Ellsberg is one of the few prominent Americans who has dared to defend Manning.

Disclosing war crimes is not a crime but an act of patriotism, says the 79-year-old. It almost sounds like something Obama himself would have said -- back then, when he was still running for president. 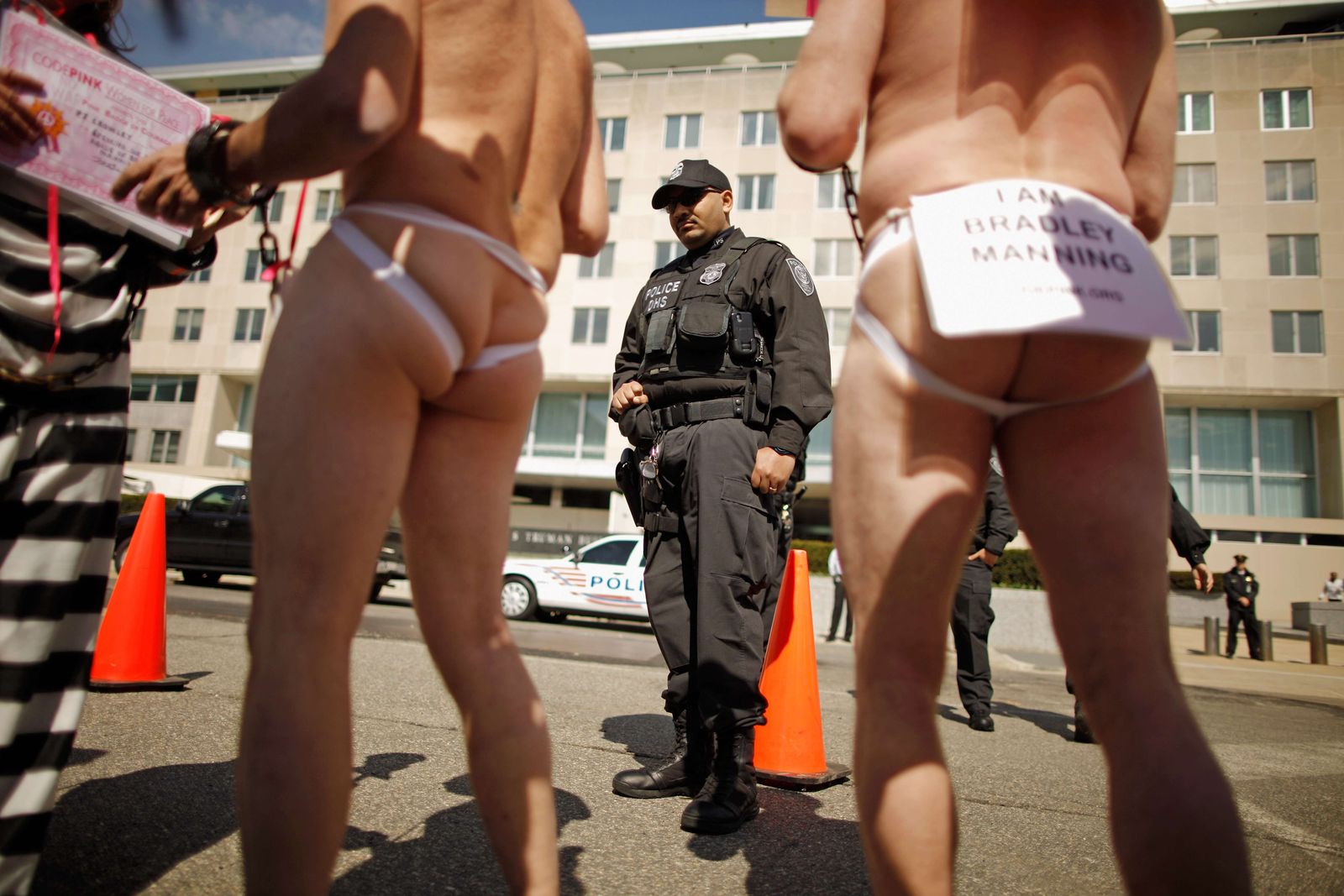 Activists protest the conditions of Bradley Manning's detention in front of the US State Department in Washington on Monday.