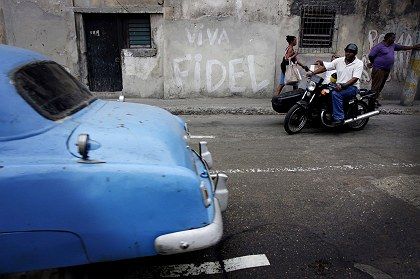 As Fidel Castro retires Cuba is left with an uncertain economic future.

It's hard to miss the giant billboard with the call to "Save Energy." Displayed on the road connecting Havana and Matanzas, the colors of the poster may have faded but the campaign is more relevant than ever. New buses for Cuba's city and regional public transport system and new Chinese-made trains are intended to improve the energy efficiency on the island. And the government has declared war on ancient energy-guzzling household appliances.

It's all part of what Fidel Castro has dubbed the "energy revolution." The aim: to drastically reduce energy costs on the island. The aged revolutionary leader announced back in 2004 that the investment in the energy savings program would soon pay for itself in the savings made.

Whether that sum adds up is disputed in Cuba. It is certain that the "Revolución energetíca" was the last great economic vision from the Comandante en Jefe -- a vision that has at least paid off for a number of German firms that are involved in the modernization of Cuba's power stations and generators.

It looks like these economic contacts are set to become even closer in the future, with more cooperation in the areas of medical technology, biotechnology and sewage disposal on the agenda. Cuba provides an interesting opportunity for companies around the world -- thanks to an important legacy of the revolutionary leader: education.

It was Fidel Castro who personally began the impressive crusade for education in Cuba following the 1959 revolution. The drive for literacy across the island was to provide the basis for a knowledge society. The former president is still proud of this today. In his resignation letter published in the party paper Granma on Tuesday, he couldn't help but point out that every Cuban has completed an average of 12 years of basic education. The Comandante had made the Cubans a nation of high-school graduates, and the island a location for science and research.

This has paid off in the past, and it could still count in the future. For example, Cuba is one of the leading countries in the world when it comes to biotech-pharmaceutical research. Scientists in Havana are working on vaccinations against AIDS, Leprosy and Cholera and have developed some of the first vaccinations against cancer, which are almost ready to go on the market.

One of these vaccinations, Osag101, is intended to stop the spread of cancerous cells in the brain, throat and neck. A German company, Oncoscience, based in Wendel near Hamburg, has the license for selling the drug in 46 countries. Osag101 is currently undergoing clinical tests in Germany and Oncoscience chairman Ferdinand Bach is confident that it will soon be approved.

The drug is just one example of Cuba's success in the biotech sector. According to industry magazines and conferences, the country's scientists are working on a number of different medicines. But their weak point is when it comes to marketing them.

Another problem is the fact that many of Cuba's researchers have been unable to resist the temptations of the West. The brain drain of scientists is a constant topic in the well-equipped laboratories of Havana. Highly qualified Cubans are simply paid better in San Francisco, Paris or London. In response, Cuba has given its researchers many privileges, including foreign currency bonuses, nice apartments and further training abroad. However, the standard of living is not high on the island, and there are always shortages of even the most everyday items.

The primary problem, though, is that in Cuba things may be tightly controlled but little is produced. Fidel Castro has not succeeded in transforming his unquestionable success in educational policy into economic dynamism. The "biotech Revolution" that was introduced in 1981 makes no more than half a billion dollars a year. That is just pocket change compared to the profits of biotech companies in the US.

Things look just as unimpressive in many other parts of the Cuban economy. The best example is agriculture. According to the Granma newspaper, Cuba had to sink $1.7 billion into food imports in the last year alone. In 2002, at the Commandante's behest, the country had to cut back on sugar production in order to put more into manufacturing foodstuffs.

Even Cuban agricultural experts admit that the results have been devastating. Most often to blame are the centralized, over-bureaucratized decision-making and planning processes. At the same time, salaries can't keep pace with the cost of living. Carmelo Mesa-Lago, Cuba expert at the University of Pittsburgh, estimates that the Cuban peso has lost 76 percent of its purchasing power since 1989.

But Fidel Castro has paid little attention to Cubans' suffering and the economy's poor productivity and been all too happy to ascribe it to the trade embargo of the evil USA.

Particularly atrocious are the effects that the "bear with it" policy has had on the agricultural sector, where reforms address all but the central problem -- that of land ownership. Armado Nova of the Center for the Study of the Cuban Economy (CEEC) in Havana puts it clearly: "Why should I invest in the land, if it doesn't belong to me?"

Fidel Castro can hardly offer Cuban youth many prospects. The economy is being strangled by state bureaucrats. Following the collapse of the sugar economy, the country wanted to build up new sectors of production -- but the project has failed miserably. Now it's up to Castro's younger brother Raul to clean up the mess.

He, unlike the ex-president, will not hesitate to talk about home-grown problems. One of these is the dependency on Venezuela, which is providing the island with oil. At the moment, roughly 30,000 Cuban experts -- from doctors to engineers -- are in Venezuela. Their work is being well rewarded and according to experts at the CEEC, their pay constitutes Cuba's most significant source of revenue.

In colonial times, Cuba was slave to Spain, then to the US and, after the revolution, to the Soviet Union. Now it is dependent on Venezuela and its President Hugo Chavez -- but that's only discussed behind closed doors in Cuba. A legacy of the Commandante, from which the country is already suffering.

"Economic growth in recent years has reached almost 40 percent. But most of this is generated by services abroad -- mainly in Venezuela," says social scientist Omar Everleny. "There is little dynamic in the domestic economy." One reason for this is the most recent centralization program that started in 2003 under Castro's direction.

Brother Raul, a pragmatic thinker, wants to scale back the program. His plan is to renew Cubans' enthusiasm for the revolution. This often starts at the kitchen table. Raul has already indicated that he plans to make sure that the tables of Cubans are not bare for much longer.