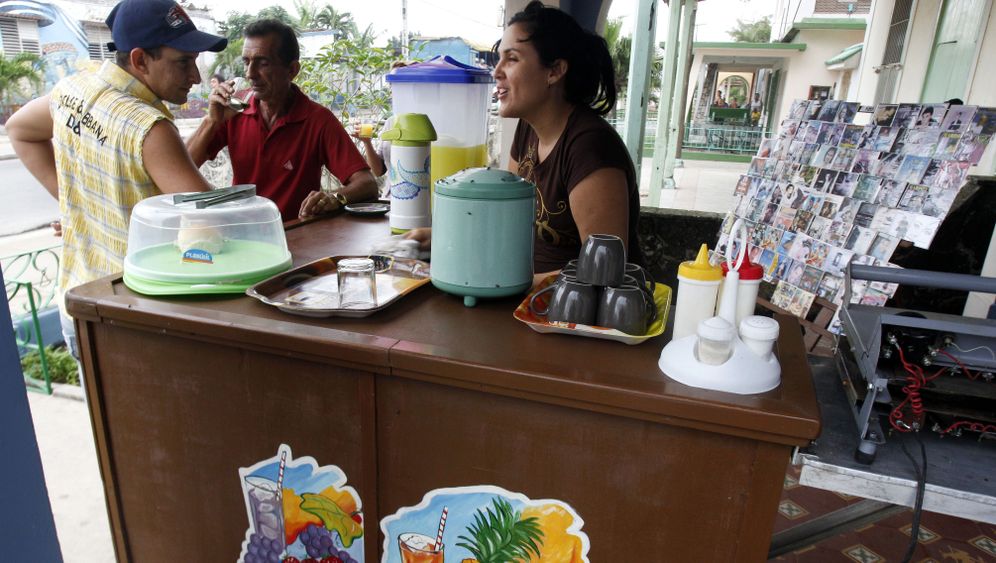 The vehicle Juan Perez calls his Audi is a blue two-seater with seats made of imitation leather. The passenger has to do without an airbag and a seatbelt. Indeed, about the only thing it really shares in common with the German car brand are the four rings on the handlebar meant to look like the Audi logo.

"Do you like my Audi?" Perez asks, throwing his weight into the pedals of his bicycle-powered rickshaw. He dreams of owning an A4 with air-conditioning and alloy rims.

Perez has been working for himself for the last year, now that the Cuban government has granted him a license as a small business owner. He earns the equivalent of €300 ($400) a month. The only problem, he says, is that he has to pay taxes now. His stand is at the beginning of Havana's Calle Neptuno, where rickshaws, mopeds, pre-revolutionary vintage taxis and government-owned Ladas battle for every bit of asphalt amid a cacophony of horns. The smell of gasoline hangs in the air.

The "Neptuno" begins at Prado Boulevard, in the heart of the city, and leads to the university in Vedado, a formerly middle-class neighborhood. Its streets are lined with small shops, handicraft businesses, restaurants and self-serve dining establishments.

But the Neptuno is no ordinary street. It is a laboratory for the experiments that President Raul Castro has prescribed for Cuba's 11 million inhabitants. What happens in this area will demonstrate whether his ambitious project is a success. Castro wants to combine the state-run economy with market-based reforms in the hope of transforming Cuba into a sort of Caribbean Vietnam.

However, Castro is still ruling out political liberalization. Allowing opposition groups would amount to "the legalization of the parties of imperialism," he warned at a Communist Party congress in late January.

So far, Cubans' hopes that they might be allowed to travel abroad have been in vain since the regime has refused to amend its migration laws. Revolutionary veterans are still in charge in a country where the average age in the National Assembly is well over 70. And regime critics continue to be repressed.

In the economic sphere, however, things that were once unthinkable are suddenly possible. To reduce expenses, the government recently laid off 500,000 employees. They are now permitted to open shops and handicraft businesses, sell real estate, cars and home-grown vegetables, or -- as in the case of Perez -- drive their own rickshaws. Within a year, the number of very small businesses has doubled to almost 350,000. Nevertheless, these ventures are still a far cry from being genuine small businesses or even privately owned companies.

Still, when Pope Benedict XVI arrives on the island for a three-day visit next week, he will experience a "different Cuba," writes the Miami-based El Nuevo Herald, the Spanish-language sister newspaper of the Miami Herald and one that harbors no sympathy for the island nation. According to the paper, Raul Castro has "approved the biggest expansion of private economic activity that has ever taken place under the communist regime."

In addition to serving the pastoral needs of the roughly 5 million Cuban Catholics, the pontiff's visit has a political dimension. Since the first papal visit 14 years ago, relations between Cuba's Catholic Church and the government have significantly improved. Indeed, then-Pope John Paul II and revolutionary leader Fidel Castro got along with each other well from the very start.

After falling ill in 2006, Fidel withdrew from all political offices. His brother Raul, who now runs the government, did not sever ties with the Vatican. The Church has brokered the release of political prisoners, and both sides -- dissidents and the government alike -- value it as a key player in negotiations.

The clergy also supports Raul Castro's reforms. "The process is irreversible," said Cardinal Jaime Ortega, the archbishop of the Archdiocese of Havana, who has also called upon the government to speed up the liberalization process.

Cuba remains strongly affected by its own mismanagement and the economic embargo by the United States. Nevertheless, the country hasn't been dependent on its big neighbor to the north for a long time. It receives oil at discount prices from Venezuela, and Brazil is spending €480 million to expand the port of Mariel, just west of Havana, where Cuba is expected to develop a special economic zone based on a Chinese model.

With foreign assistance, the socialist government could also soon secure a new source of revenue as Cuba searches for oil off its coastline. American experts are so concerned about safety that a US team thoroughly inspected the Chinese drilling platform Cuba is using. Under the terms of the embargo, Americans are not permitted to supply the Cubans with their own equipment.

Where Cash Is King

Until now, the beneficiaries of the boom in Cuba have mainly been Europeans, Latin Americans, Canadians and the Chinese. "The Cubans pay on time, in cash and in foreign currency," says a German businessman who has lived in Havana for years.

Indeed, ganancia, the Spanish word for profit, is no longer a dirty word in Havana, where a gold-rush mentality has taken hold. New privately owned restaurants are constantly opening, and their owners buy meat and vegetables at early-morning farmers' markets.

The passengers of Perez, the rickshaw driver, include housewives, businesspeople, tourists and government workers alike. For €5, he'll take a passenger along the entire, 24-block length of the Neptuno. And he doesn't accept Pesos Cubanos, the official currency.

"Anyone who wants to do business in Cuba has to earn CUC," Perez explains, referring to the island's convertible currency. The hard currency used to be reserved for tourists, and its general availability represents the first step toward a free market economy. Those who have CUC in their pockets can buy anything: shampoo from Brazil, steaks from Argentina or Coca-Cola from Mexico.

Many Cubans also own foreign currency. Relatives send them dollars from Miami or euros from Spain, which they convert to CUC at currency exchanges. Corruption, which President Castro has declared the government's biggest enemy, also remains a source of supplementary income. Indeed, many goods sold along the Neptuno come from the black market.

Likewise, there are no supply crises for people with CUC in their pockets. Indeed, the families and clubs that hold barbecue parties in Lenin Park, on the outskirts of Havana, seem to have no trouble buying the pork chops and chickens sizzling on the grill or the Bucanero beer they drink to wash it all down.

But there is a downside to the boom that directly relates to a taboo of the revolution: the growing divide between those who have foreign currency and those who earn pesos, instead. Small entrepreneurs like rickshaw driver Perez, for example, earn several times the salary of a typical government employee, who is paid in pesos.

Foreign companies that are forced to cooperate with government-owned firms in Cuba are losing their skilled workers because they are required to pay their employees' salaries to the government in hard currency. The government then pays the employees in pesos. In fact, many engineers have left their jobs because they can earn more selling pirated DVDs or as auto mechanics.

The shops along the Neptuno that accept foreign currency are thriving. Private restaurants and hotels buy their filets and pork chops at the Oro Rojo ("Red Gold") butcher shop. An Adidas store has opened up a few doors down. Like elsewhere, brand-name sneakers are a status symbol in Cuba.

Former government workers now sell mobile-phone chargers, bras and building materials at tiny kiosks. Private jewelers and watchmakers have set up shop in the Berens fashion center, where the upper class shopped for clothes before the revolution.

The street continues uphill, with the university on the left and the Hotel Habana Libra, the former Hilton, on the right. Police officers patrol the sidewalk, where young men and women are on their way to the "Neptuno" bodybuilding gym. Owner Manual Galzabuni -- who has piercings in his nose, ears and lips -- built the fitness equipment out of scrap metal, bicycle chains and pipes. Some 200 people visit his gym every day.

A few steps farther, Cuban women are teaching Salsa to Frenchmen at a dance school next to Jorge Chavez's new herb shop. Chavez used to work as a painter in a government-owned business, but now he grows medicinal plants to treat bronchitis, impotence and prostate ailments in a garden on the city's outskirts. His profits, he says, are a "business secret, but the business is worthwhile." His monthly tax bill amounts to 120 pesos or 5 CUC (€4).

A Property Market Heats Up

A few hundred people, some holding up cardboard signs, have gathered under rubber trees on Prado Boulevard, where the Neptuno begins. They are advertising their houses or apartments, now that the sale of real estate has been allowed since November.

The private ownership of property was never forbidden in Cuba but, until now, owners were only permitted to exchange their properties rather than sell them. However, there are still many unresolved property disputes, especially concerning the properties of families that have left the country.

One of the brokers opens his laptop to show us photos of various houses, and flyers advertising available real estate are attached to the trees. A 414-square-meter (4,450-square-foot) house on the outskirts, complete with a hectare (2.5 acres) of land, is advertised for 65,000 CUC, or about €50,000.

Foreign potential buyers are especially sought-after. "I have a beach house with four rooms," a young man has written on a board. But foreigners without a permanent residence on the island are not permitted to buy real estate. Not a problem, says the broker: "There are methods and solutions. Snap it up. It's a real opportunity. You won't be able to pay for this house in a few years because the Americans will be buying it out from under you."

But Cuba isn't quite that far yet.