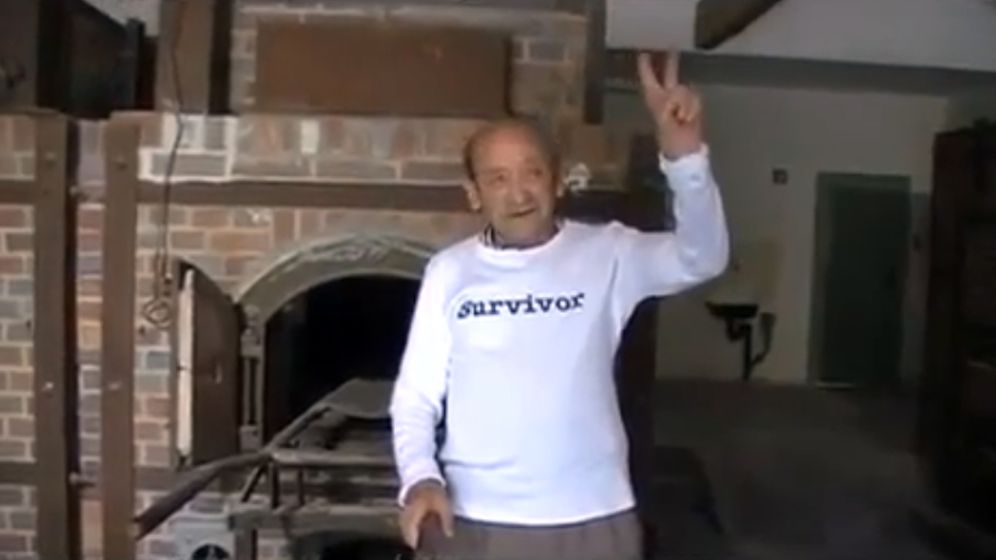 Adam "Adolek" Kohn never expected to be famous. But now he's a celebrity. The Australian gossip magazine Who deemed his story worthy of two full pages, more than it devoted to the amorous adventure of Salma Hayek and George Clooney.

Kohn, 89, has been married to the same woman for 65 years, is the father of two daughters, a grandfather six times over and has two great-grandchildren, with a third on the way. His wife Maria "Marysia" Kohn, née Wojdyslawska, is three years younger than her husband, which doesn't change the fact that she's in charge in their household. "Adolek," she chides him, "you haven't finished your dinner." "The fish can wait," Adolek calls out to his wife in the kitchen. He has just received a few emails that he feels he has to read immediately. "It's been like this for weeks," says Marysia, "all because of the video."

The video she is referring to is a short film, four minutes and 20 seconds long, that Kohn's daughter Jane Korman, an Australian artist, produced. It was shown in a Melbourne gallery at the end of 2009, and it probably would have passed into oblivion if Korman hadn't placed it on YouTube a few weeks ago.

The video, which has since been removed from YouTube due to copyright issues, was viewed half a million times within a few days. People saw it in countries like Australia, the United States, Germany and Israel -- all places where the word "Auschwitz" is still a metaphor for something so monstrous that it defies comprehension.

At first glance, "Dancing Auschwitz" -- the title of Korman's little work of art -- is a film that breaks a taboo. At second glance it's a provocation and at third glance a clever response to the question of how one can commemorate something that has long since been ground into historic gravel in the quarry of the "culture of remembrance" -- at conferences and seminars, in films and television series, at demonstrations and commemorative events, where speakers, decades too late, call upon their listeners to "nip things in the bud." In other words, it's an attempt to offer an approach to counter the mindless rituals, one that celebrates the power of life rather than commemorating death as the final culmination of human failure.

Korman, 55, has achieved the impossible. She traveled to Auschwitz with her father and her children, to a place where her parents, Adolek and Marysia, had been once before -- on the assembly line of death.

The former Nazi extermination camp, which is now called the "Muzeum Auschwitz," receives a few hundred thousand visitors a year. For the region surrounding the nearby Polish city of Krakow, Auschwitz is about as significant a tourist attraction as the site of Hitler's mountain retreat at Obersalzberg is for the Berchtesgaden area in Bavaria.

Some go to Auschwitz to remember their murdered family members, while others are fascinated by the horrors the place evokes. But no one goes there to dance, probably because having a party in a cemetery simply isn't the right thing to do. Or is it?

Pop diva Gloria Gaynor's "I Will Survive" was a huge hit in the late 1970s. To this day, countless cover versions of the song are played in clubs and at parties.

It's ironic that Korman had her father and her children dance to this classic gay anthem. They do so, hesitantly at first, as if they were conscious that what they are doing is forbidden. Gradually they become more relaxed until, finally, they are as exuberant as an amateur sports team that has just defeated a bunch of professional athletes in a championship.

In one scene, Grandpa Adolek, wearing a white T-shirt with the word "Survivor" printed on the front, stands in front of one of the ovens where the bodies were burned and flashes a V-for-victory sign. The message couldn't be clearer: Look, I'm alive! At the end of the video, Kohn, speaking off-camera, says: "If someone would tell me here, then, that I would come sixty something three years later with my grandchildren, so I'd say 'What you talking about? What you talking about?' So here you are. This is really a historic moment."

Not unexpectedly, not everyone was equally pleased about this family outing to Auschwitz. Accusations of tastelessness abounded. A spokesman for the Jewish Holocaust Museum and Research Centre in Melbourne said that his museum would not play the video under any circumstances, because it was apt to downplay "the significance of Auschwitz." Abraham Foxman, national director of the Anti-Defamation League in New York, which plays an important role in castigating anti-Semites and Holocaust deniers, said that he understood "the need to celebrate survival," but that unfortunately survival is "limited to those who survived" -- a truism that did little but reveal Foxman's own helplessness in dealing with commemoration.

While the professional remembrance workers were still trying to find the right words to confront the video, ordinary YouTube users were already a step further along. Korman received hundreds of emails from people thanking her for "Dancing Auschwitz." Particularly the children of survivors, who grew up in the shadow of the Holocaust, now felt, as one person wrote, "more joy than sadness," and that the film was "a declaration of love to life after death."

But no two people in the world are as happy and proud as Korman's parents, Adolek and Marysia Kohn. They live in a house in an upper middle class neighborhood in Melbourne, surrounded by memorabilia from more than 60 years. Each object tells a story, and every story begins -- where else? -- in Poland in the 1930s. "That woman there," says Adolek, pointing to a painting he bought at a flea market in Melbourne many years ago, "looks like my mother, Genia." Jane was named after her grandmother. The older daughter, Celina, was given the name of Marysia's mother. Neither of the women survived the war.

Adolek was lucky. He was young and able to work. Born in 1921 in Praszka, a town near Opole in southern Poland, he attended a vocational school in Lodz until 1939. After the Germans invaded Poland, the Jews were relocated to a ghetto that had been created for them. Beginning in August 1944, the "Jewish residential areas" were gradually "made smaller," and the residents who had not already died of starvation or disease were deported.

The train journey to Auschwitz took three days. It was the last journey for Adolek's mother. Adolek was assigned to a work crew and sent to a plant operated by the metal-processing company Vereinigte Deutsche Metallwerke in an external camp near Halbstadt, now the city of Mezimesti in the Czech Republic, where aircraft propellers were manufactured.

After the Red Army liberated the camps in May 1945, Adolek made his way to Lodz on foot. He met three women along the way who "looked like ghosts." One of them was Marysia.

A rabbi married the couple a few weeks later, under a baldachin made of four brooms and an old blanket. There was only one wedding ring, which the rabbi had brought along.

"And then we went to Munich."

"No idea. It just happened that way."

Voyage to a New Life

Munich, in the American zone, was a collecting point for "displaced persons" at the time. They were registered by the United Nations Relief and Rehabilitation Administration (UNRRA), assigned a place to live and sometimes given jobs as translators or office workers. Adolek worked in the "Search Division," until a distant relative in Shanghai obtained the necessary papers for Australia, for Marysia, Adolek and Celina, who was born in Munich in 1947.

The voyage on the MS Eridan, an old military transport ship that the UNRRA had chartered in Marseilles, took almost three months, and the conditions on board were catastrophic. When the ship finally arrived in Sydney Harbor on Jan. 19, 1949, the 528 passengers on board had experienced everything that could possibly happen to people on such a journey, including a murder. The Kohns completed the last segment of their trip, from Sydney to Melbourne, by train. Then they began their new life from scratch.

Adolek worked long hours in a textile factory and saved every penny he could spare. The second daughter, Jane, was born in 1955. Before she could even walk, her father had started his own business, a company called Emporium Knitwear, beginning with a used knitting machine. The dozen awards he received from the Australian Wool Board are evidence of a successful entrepreneurial career. He sold the company in 1985 and went into retirement.

Like most immigrants who arrived in a new country with nothing but their lives, the Kohns are grateful to the country that accepted them, even though they received little assistance and were left to fend for themselves.

Adolek remembers that the first thing he bought in Melbourne was a map of the city, so that he could see how far the trip was from the "apartment" -- a furnished room -- to the factory where he worked. It was, as he says today, "far, very far."

Today he is happy that he allowed Jane to convince him to make the long journey to Auschwitz. Dancing with his grandchildren in the place where his mother was murdered was the greatest triumph of his life, he says. "Since then, I am no longer a victim. I survived. I won."

Every year, on Jan. 19, the anniversary of their arrival in Australia, Adolek and Marysia Kohn give a party, to which they invite some of the people who were on board the MS Eridan with them. Each year there are fewer and fewer guests. Only 20 came this year.

It may have been the last party.