No one knows how long the building on Germany's southernmost construction site will remain standing. The structural engineers don't know, the builder doesn't know -- not even the engineer who designed it knows.

Only rough calculations can be performed to predict how stable the 2,300-ton steel structure will be on stilts. Instead of building it on sand Dietrich Enss, the man who devised the structure, built it on snow, which is even more difficult. He calls it "the world's most complicated construction material."

Enss, a civil engineer from Hamburg, searched for a mathematical formula to calculate how snow behaves under a load of 30 tons per square meter, but he found nothing in the professional literature. What he did bring to the table, however, was experience and a familiarity with snow. He has been building on icy foundations for the past 30 years, in both Antarctica and Greenland. "Nevertheless," says Enss, "my colleagues consider me to be quite courageous."

The Neumayer III station is the crowning achievement of Enss's career as an engineer. He designed the first West German Antarctic station in the late 1970s and built the second one in 1992. His latest feat will be dedicated this Friday by German Minister of Education and Research Annette Schavan, a member of the conservative Christian Democratic Union (CDU) -- by telephone from Berlin, 13,758 kilometers (8,600 miles) away.

The Neumayer III station is Germany's bridgehead on the seventh continent. It alone guarantees power under international law, because the treaties governing the Antarctic stipulate that only those countries that maintain a research station on Antarctica are entitled to have a voice in the southernmost continent's fate. From the station, Germany's polar research team gathers data on a still-mysterious world of ice -- data critical to understanding and predicting the geological and climatic fate of the planet.

Enss, 68, who owns a small consulting firm that specializes in polar engineering, works as a consultant for the Alfred Wegener Institute for Polar and Marine Research (AWI), which is based in the northern German port city of Bremerhaven and operates Neumayer III. Enss's contact at AWI is Hartwig Gernandt, 65, the head of the institute's logistics department. What the two men have in common is that they have spent most of their professional lives populating the empty continent, but "on two different sides," as Gernandt points out.

Gernandt, a physicist, built a station out of containers on the coast of Western Antarctica. That was in 1976, and it represented a victory for East Germany in the race between the two Germanys to secure a spot in the Antarctic. A few years later, Enss conceived the first polar station for West Germany, named after Georg von Neumayer (1826-1909), one of the great patrons of German polar research.

"What we have now created overshadows everything we built back in those days," says AWI logistics expert Gernandt. The station structure consists of a two-story platform on stilts. It is 68 meters (223 feet) long and has two additional floors underground that house a garage, workshops and storage rooms. The stilts rest on the snow of the Ekström Ice Shelf on Atka Bay. The structure's 128,000 parts are held together by 16,000 screws. The insulated steel façade must be capable of withstanding wind speeds of 175 kilometers per hour (110 mph), and yet it cannot be as rigid as a block of stone. 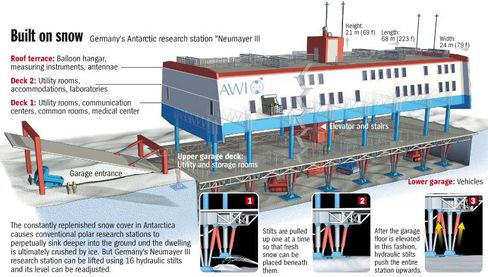 The building stands on a sheet of ice that is 230 meters thick and floats on the Weddell Sea. Like a sluggish river, the glacier is pushing itself away from the Antarctic ice cap and out to sea at a rate of 157 meters per year. Because the ice does not flow at a uniform rate and rises and falls with the tides, the station on stilts behaves like a surfer on a wave. Sometimes the ice compresses the station and sometimes it pulls it apart -- a nightmare for structural engineers.

The challenge for Enss and Gernandt was to tame opposing forces, so that their station would be rigid while its foundation remained flexible. To complicate matters even further, it had to be height-adjustable. "We gain almost a meter of additional snow a year on the ice shelf," Enss explains.

For this reason, the engineer designed high-tech stilts for the polar station. Each stilt contains two hydraulic cylinders that can raise it like the leg of a flamingo. Once a year, the AWI engineers will raise each of the station's legs, one at a time, push new snow underneath it and then lower the steel feet once again.

This makes it possible to eliminate the unwanted forces generated by uneven ice pressure that would normally be exerted on the stilts. At the end of each yearly procedure, the AWI engineers will raise all 16 stilts by one meter, so that Neumayer III does not become snowed in. This allows the station to grow upward as the ice cap thickens.

As elegant as it sounds, one of the risks associated with the heavy steel structure all but defies calculation. The crystal lattices of the frozen water molecules could fatigue under the constant pressure, and the snow could suddenly turn as soft as pudding and begin to flow. "Part of the reason this phenomenon is so difficult to calculate is because snow can have so many different characteristics," engineer Enns admits. To address the problem, highly responsive sensors on the hydraulic stilts constantly measure the snow foundation to determine whether it is weakening. If it does weaken, the AWI staff must quickly retract or lift up the sinking legs and add fresh snow underneath.

This dance on the ice will be difficult to direct for the nine members of the team, who will spend the six months of winter at the station, beginning in March. It will be no comparison with the station's uncomplicated precursor. Neumayer II was simply a large tube under the ice. Its shelf life was clear from the start, as the new snow falling each year will gradually crush the submarine-shaped structure.

The polar researchers have spent the last few days moving out of their underground quarters, taking their satellite equipment, large projection screen, DVDs and an ancient sofa to the new, light-filled structure.

"Everything is subject to a strict German passion for order," says Gernandt. Garbage at the South Pole station, for example, is separated into 28 different containers, as required by law. An inspector from Germanischer Lloyd, a safety testing organization, is already officiously wandering the hallways. He has the staff show him the fully organic sewage treatment system, in which sludge is dried before being loaded onto icebreakers and shipped back to civilization.

The new, €26 million ($34 million) structure will soon turn into a giant measuring station, constantly recording the temperature and wind speed, ozone levels, UV radiation and even the seismic footprints of banned nuclear tests.

The polar researchers can also expect to face new dramas in their temporary home on the eternal ice. At the old station, one member of the winter staff died, possibly as a result of suicide, a helicopter crashed and a snow-grooming machine ran over a journalist. A few years ago, the station doctor pulled her own tooth when it became infected.

The future denizens of Neumayer III are selected on the basis of strict psychological tests. "You have to be at peace with yourself," says Gernandt, who spent two winters in Antarctica in the days of the former East Germany. For those who are not, the loneliness of the Antarctic can lead to despair.

Despite an Internet connection and satellite telephone, the experience made by an old polar explorer remains true today: "You can hide from mankind in the Antarctic, but never from yourself."