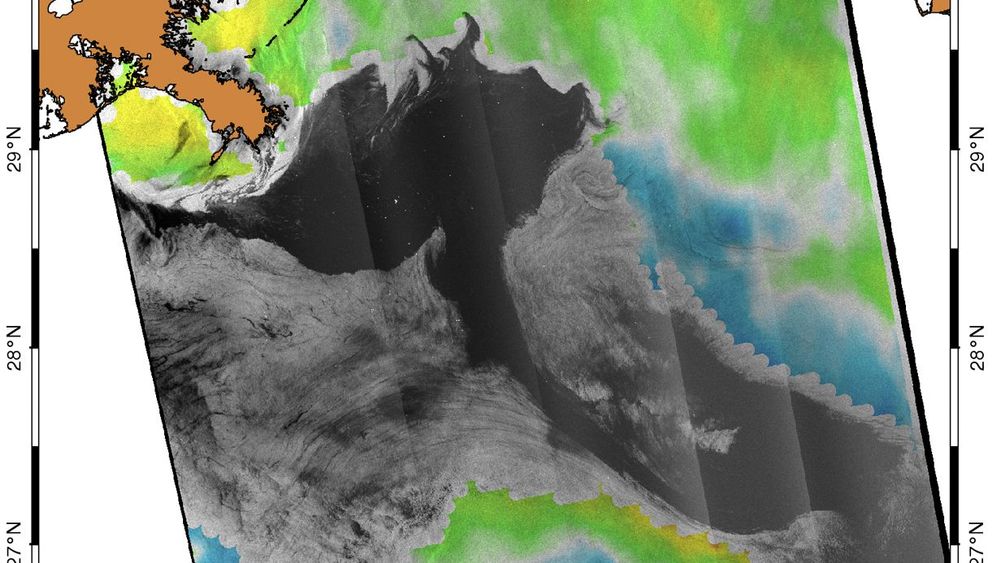 For three weeks now, engineers have been fighting the oil spill in the Gulf of Mexico -- without much success. It is only over the past few days that experts from the British oil giant BP have succeeded in increasing the amount of oil they are able to pump away from the well that was destroyed at the end of April. The company has announced that it is now capturing 2,000 barrels of the 5,000 barrels it estimates are leaking into the ocean per day. (Some estimate that up to 70,000 barrels may be leaking each day.) Previously BP had only managed to capture 1,000 barrels a day at most.

However, with that good news comes the next round of bad news. According to information obtained by SPIEGEL ONLINE, the massive oil slick has reached an important ocean current: the so-called Loop Current in the Gulf of Mexico. This massive body of water flows to the north before swinging in a clockwise direction when it reaches the Mississipi Delta, after which it first spins eastward, and then finally northward to join the Gulf Stream. This powerful maritime conveyor belt could now carry oil to the previously unendangered coastal areas of Cuba and the US state of Florida. Basically the dirty black plumes have reached a kind of massive mixer, which could considerably increase the risk of pollution.

"The Loop Current links the Caribbean with the Florida Current," Peter Brandt of the Kiel-based Leibniz Institute of Marine Sciences (IFM-Geomar) told SPIEGEL ONLINE. Although half a dozen eddies separate off from the main current in the Gulf of Mexico, most of the warm ocean water ploughs through the Florida Straits in the direction of the open Atlantic Ocean at a rate of one to two meters per second. And part of the oil slick now looks likely to be traveling with it.

The Loop Current changes its position slightly over time. At the moment it is running south of where the Deepwater Horizon drilling rig sank. The turbulent current is at least 1,000 meters deep and is particularly fast near the surface of the ocean. Satellite images show how the ocean regularly bulges, arching up by sometimes more than half a meter.

'It Is Just a Question of When'

What was just a hypothetical danger for the past few weeks has become a certainty, at least for oil on the ocean surface. The current has reached the opaque slick. "We have the evidence. It's already done," says Bertrand Chapron. The scientist at the Ifremer Marine Research Center, based in the French city of Brest, told SPIEGEL ONLINE that he has been able to observe the current from above. The European Space Agency (ESA) satellite, Envisat, has been providing constant radar images. According to Chapron, the images show that at the very least, oil on the ocean surface has reached the Loop Current.

US oceanographers have been warning about this eventuality for days. William Hogarth of the University of South Florida presented computer simulations indicating how the oil must already have reached the current. The calculations may not have been definitive but Hogarth's colleague Peter Ortner of the University of Miami was certain about one thing: "It's only a question of when."

That question has been answered. "The oil will cross the Florida Straits within six days," says Chapron. That could explain why the US Coast Guard has already discovered around 20 balls of tar measuring seven to 20 centimeters in diameter near Key West in Florida. It is unclear whether they originate from the sinking of the Deepwater Horizon but chemical analysis should clear up this mystery soon. Even without the current oil slick the Gulf of Mexico has a high level of pollution and the Loop Current traditionally plays the role of an "ocean waste disposal service."

But now the residents of Florida and Cuba may have to get used to even uglier flotsam and jetsam on their beaches. "It is very possible that they will find oil there," Laurent Bertino, a scientist with the Nansen Environmental and Remote Sensing Center, based in the Norwegian city of Bergen, told SPIEGEL ONLINE.

The oil slick may cause devastation in the region. Environmentalists are particularly worried about the Florida Keys, with its coral reefs, fields of seaweed and coastal mangrove swamps -- as well as the potential effects of the oily devastation on a tourism industry that brings billions of dollars to the region each year. Florida's west coast, on the other hand, may be spared, because the current passes by the coast at a distance.

US Secretary of the Interior Ken Salazar has admitted that the government shares some blame for the oil slick. He said on Tuesday that his department failed to properly oversee the deep-sea drilling and to make the oil industry accountable.

So far, no one knows what damage the oil being transported by the Loop Current may inflict; The current will mix the oil and water together ferociously. "Very intense, very turbulent," says Chapron. That turbulence could end up protecting the coastlines as the oil is carried out to sea by the Gulf Stream in drop-sized quantities, instead. Theoretically it could then travel across the Atlantic toward Europe -- although the danger of the toxic substance actually reaching European shores is hardly more than a theoretical threat right now.

The oil poses a more immediate and real danger -- and yet one, whose effects are hard to predict -- to the states on the Gulf of Mexico and to Florida. Predictions are made even more complicated by the onset of the hurricane season. The privately owned US weather service AccuWeather has forecast an above average number of cyclones and hurricanes for the region this year. The company warns that this could hinder attempts to contain the oil spill. And the choppy waters could carry the pollution even further to areas that have not been affected so far. Additionally, hurricanes traditionally increase in strength as they move across the Gulf of Mexico -- and that energy comes from the warm waters of the Loop Current. 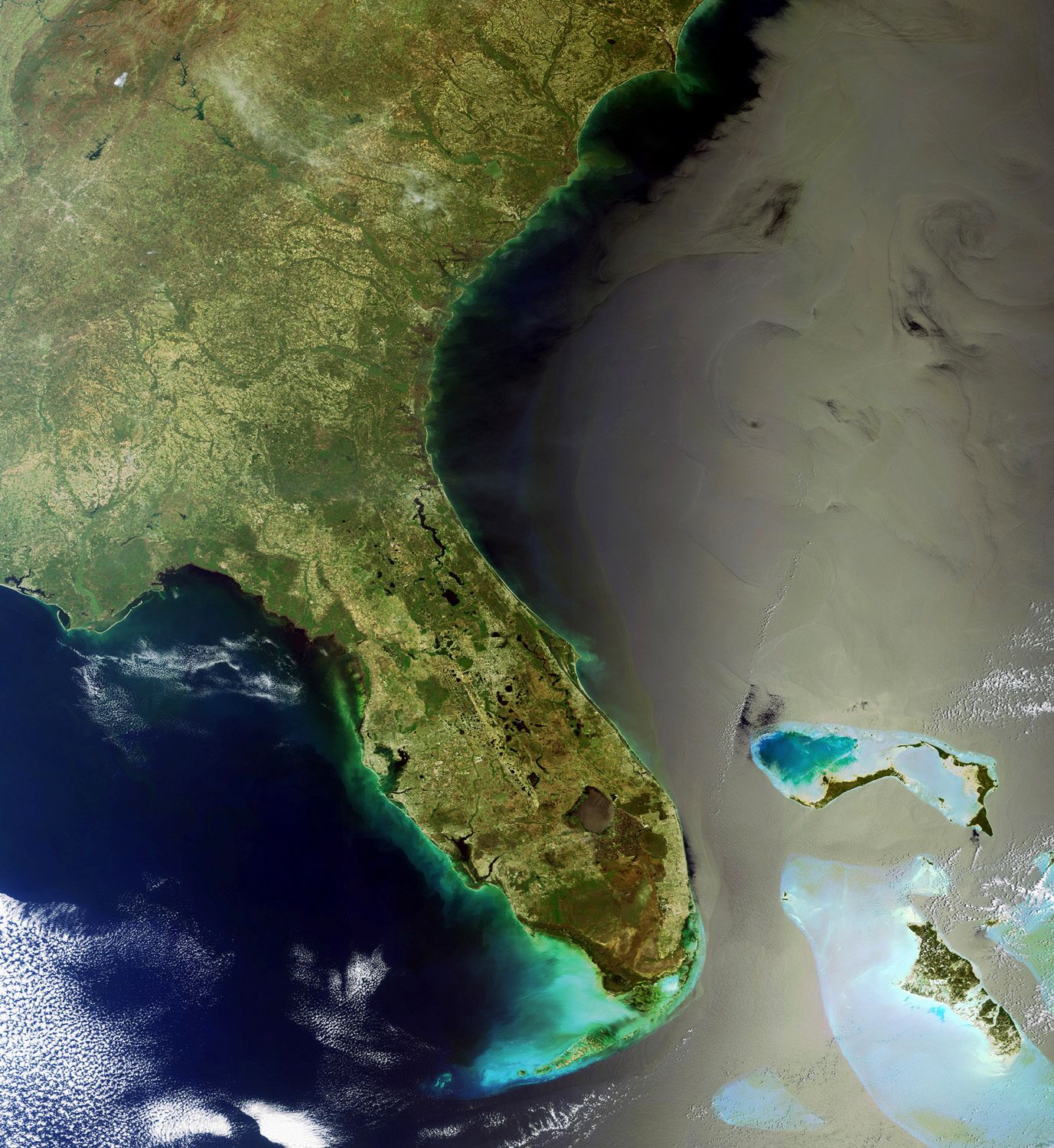 Florida's coastal region in an image from the Envisat satellite. Ecologists are particularly worried about the Florida Keys although Florida's west coast may be spared because the current passes by at a distance.