When police stormed a house near San José, the capital of Costa Rica, they knew exactly what they were looking for. Immediately, the officers headed for a backroom where they found an old safe packed with bundles of dollars -- wrapped like cocaine in plastic.

Many of the bills were stuck together; some were already so rotten that they could hardly be counted. But the police knew the sum anyway: $480,000 (€305,000). The cash had been mentioned by Raul Reyes -- the number-two man in the Colombian Marxist guerrilla organization known as the Revolutionary Armed Forces of Colombia (FARC) -- in an e-mail to Rodrigo Granda, known as the "chancellor" of the rebel group. Granda was to use the money to finance international activities. The address where the stash was to be found was also mentioned in the message.

The $480,000 e-mail was one of hundreds of documents found on Reyes laptop. Colombian troops had killed the sleeping guerrilla leader in early March during a pre-dawn bombing raid on a FARC camp in Ecuador -- and secured the laptop. It was found together with three other computers and a number of compact discs in a suitcase that survived the attack.

Interpol specialists are currently analyzing the recovered data. Some of the information has been encrypted, but most of the files are easily accessible. Reyes felt safe in his camp, less than two kilometers (1.25 miles) from the Colombian border. In roughly two weeks, Interpol Secretary General Ronald Noble plans to announce the results of the investigation. But one thing is already clear: the laptops contain a political bombshell. They hold detailed information on FARC's relations outside of Colombia, the group' finances, their smuggling routes and records for cocaine deliveries. There are also details of bomb attacks carried out be the group.

The seized files also allowed police to track down 30 kilos (66 pounds) of uranium, which had been hidden in a village near the Colombian capital Bogotá and possibly belonged to the guerrillas. Although the material is not suitable for manufacturing bombs, it could be used to produce special ammunition capable of piercing armored vehicles. 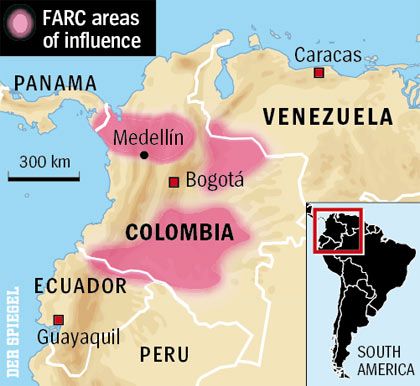 Reyes also refers to negotiations with the French government on the possible release of former Colombian presidential candidate Ingrid Betancourt. In an e-mail to the top rebel commander, he complains that the French-Colombian -- who has been held hostage by the FARC for over six years -- is stubborn and tries to take advantage of her intellectual superiority. Meanwhile, Betancourts health has become so poor that Paris sent a plane to Bogotá last Thursday equipped with medical supplies manned by doctors to give her emergency care in the event of her release.

But the most important man exposed by the files on the laptop is Venezuelan President Hugo Chavez -- the same man who threatened his Colombian counterpart Alvaro Uribe with war following the cross-border raid against Reyes. Now its clear why: Chavez apparently does more than just sympathize with the guerrillas in his neighboring country -- he also supports them with money and arms.

Boon for the Guerrillas

Reyes posthumous electronic correspondence reveals that Chavez had planned a meeting with legendary FARC leader Manual Marulanda, and he wanted to invite Nicaraguas head of state Daniel Ortega and Bolivian President Evo Morales. Another e-mail refers to a dossier of over $300 million for the FARC. The government in the Venezuelan capital Caracas also apparently offered the rebels a share in the country's oil business and promised decommissioned arms from the countrys own army.

Chavez insists that he has never sent the rebels money or arms. After the saber rattling with Colombian leader Uribe, he is portraying himself as a man of peace. But former rebels and intelligence experts confirm the connection with the guerrillas.

Chavez discovered his sympathy for the Marxist rebels in the early 1990s. At the time, he was a member of a group of rebellious officers who drew their ideological inspiration from the Marxist insurgent movements of the 1960s and '70s in Colombia and Venezuela. Following an attempted coup against then President Carlos Andres Perez, Chavez landed in prison. A cash injection from the FARC allegedly helped him out of his financial squeeze at the time.

It was a boon for the guerrillas when Chavez was swept to power in a democratic election 10 years ago. Following decades of isolation, the Colombian rebels had finally gained a partner in their key neighboring country, someone who knew how to mobilize the left throughout Latin America.

In the late 1990s, while then Colombian President Andres Pastrana was negotiating a prisoner exchange with the FARC, the Venezuelans were conducting parallel negotiations with the organization, says a former rebel fighter. The informant, who goes by the code name Manual Garcia, turned himself in to the authorities four years ago. In Caracas they believed that the FARC could rise to power by peaceful means -- just like Chavez in Venezuela, he said.

But the negotiations with Pastrana broke down, and Chavez allegedly opened up Venezuela to FARC as a refuge. Intelligence officials in Colombia maintain that Chavez is planning an ideological and military alliance with the FARC to neutralize the military as a democratic institution and merge it with the militia movement.

In effect, the Venezuelan leader has been working for years to create parallel power structures within his own country. A failed coup six years ago only served to heighten his distrust of democratic institutions. Chavez had arms distributed to 100,000 civilians, who were to stand at his side in the event of an invasion. A large number of slums in Caracas are now patrolled by heavily armed paramilitary units.

Colombian guerrillas from the FARC reportedly also train the pro-Chavez militia that operates near the border. Intelligence sources report that there are seven FARC advance patrols operating within Venezuela. They supervise the smuggling of arms and cocaine.

The FARC moves in the neighboring countries like a fish in water, says former guerrilla Garcia. The 77-year-old FARC leader Marulanda, guerrilla leader Ivan Marquez and a number of mid-level commanders are in Venezuela, according to Colombian government sources.

High-profile efforts by Chavez in early January to secure the release of renowned FARC hostages have thrust the jungle guerrilla group back into the international limelight. But without backing from Caracas, they would have been defeated long ago, maintains the government in Bogotá -- after all, the rebels are under extreme pressure.

A number of their leading commanders have been killed over the past few months. And more than that, up to 200 men desert every month, no longer seeing a future in the armed struggle. Security experts estimate that over the past few years the number of guerrillas has been reduced by half to roughly 8,000. The majority of Colombians now believe that the FARC can actually be defeated militarily.

It is primarily thanks to their lucrative revenues from the drug trade that the rebels still have access to money and arms. Venezuela also plays a key role here. Authorities on drug trafficking say that approximately 30 percent of Colombian cocaine is smuggled through Venezuela on its way to Europe and the US. From their military bases on the border, Colombian soldiers observe dozens of small aircraft every day flying over Venezuelan territory, headed for Central America and Mexico.

Venezuela is the drug trafficking mecca, confirmed Colombian narcotics boss Luis Hernando Gomez Bustamante following his arrest last year. Former rebels say, however, that the Venezuelan authorities are directly involved in the trade. European diplomats in Caracas see a real danger in the country degenerating into a drug state under Chavez.

The latest revelations on the close ties between Chavez and the FARC have alarmed Washington. The White House is considering placing Venezuela on its list of countries that support terrorism. But the resulting economic sanctions could have a boomerang effect. The US imports 12 percent of its oil from Venezuela.