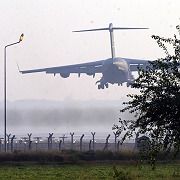 An Air Force cargo plane lands at Incirlik Air Base in Turkey. If US Congress passes the Armenian genocide resolution, military relations could suffer.

A push in the United States Congress to pass a bill condemning the 1915 Armenian massacre under the Ottoman Empire as a case of genocide is threatening to put yet another strain on ties between Turkey and the US, which are already strained.

Turkey has threatened to take dramatic steps against its NATO partner if the bill passes, including a curtailing of military cooperation between the two countries.

"The consequences of such a step would go beyond the imaginable and would have a lasting effect," the Turkish Foreign Ministry in Ankara warned last week. Mehmet Dulger, who chairs the Foreign Relations Committee in the Turkish parliament as a member of the ruling AKP party, warned that Turkey might even go so far as to restrict American access to Incirlik Air Base.

The base is of major strategic importance to the US, which uses it to supply its troops in Iraq and Afghanistan. Ankara's refusal in 2003 to permit US troops to cross into northern Iraq through Turkey triggered the current tensions.

For its part, the Bush administration is seeking to stop Congress from pushing through the resolution. In a March 7 letter, Secretary of State Condoleezza Rice and Defense Secretary Robert Gates warned leading members of Congress about the potential fallout the bill could have for US-Turkish relations. And on Wednesday, Rice cautioned that the US should not get involved in the dispute over the mass-killings, which resulted in the deaths of as many as 1.5 million Armenians.

In February, Turkish Foreign Minister Abdullah Gul and Yasar Buyukanit, chief of the general staff for the Turkish Armed Forces, began a political offensive against Washington, saying that Ankara considers the massacre to be a tragic act of violence that happened in the context of World War I but not genocide.

Nancy Pelosi, the Democratic Speaker of the House, made her view very clear: She didn't even receive Foreign Minister Gul.