No issue divides Turks more than the country's alleged creeping Islamization. Early last week, the Scientific and Technological Research Council of Turkey (Tubitak) sparked an international controversy after it prevented the publication of a cover story about Charles Darwin's evolution theory in Bilim ve Teknik (Science and Technology), one of the country's leading science journals. The publication's editor-in-chief, 41-year-old Cigdem Atakuman, claims she was fired as a result of the incident. 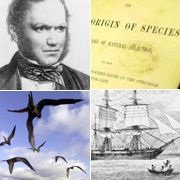 Charles Darwin: a theory too hot for Turkey?

Secular Turks are outraged and the world is watching. Did Tubitak, which publishes Bilim ve Teknik, censor a feature about the theory of evolution under pressure from the conservative Islamic-oriented AKP-led government because it couldn't be reconciled with Muslim religious beliefs?

A senior Tubitak official has blamed the editor for removing the story, according to Turkish daily Hürriyet, saying changes were made at the last minute and rushed. But Atakuman has denied the allegation, saying the deputy head of the council, Ömer Cebeci, told her the cover story was too controversial and that he no longer trusted her to responsibly perform her duties. The paper claims the incident has been reduced to a case of "one person's word against the other's."

In an interview with SPIEGEL ONLINE, Atakuman defends her position and says she is worried about the future of bias-free science in her country.

SPIEGEL ONLINE: Ms. Atakuman, is it true that you were fired?

Cigdem Atakuman: Yes, it's true. Up until now, there has been no official statement. But I was made to understand, verbally, that I have no future as the editor-in-chief of Bilim ve Teknik.

SPIEGEL ONLINE: Who told you that?

Atakuman: Ömer Cebeci, the vice chairman of the council.

SPIEGEL ONLINE: What reasoning did he provide?

Atakuman: The cover story about Darwin was a big mistake, an unforgivable error. In the current political climate in Turkey, something like that could be perceived as a provocation.

SPIEGEL ONLINE: In what political climate?

Atakuman: I believe Professor Cebeci was referring to the upcoming municipal elections in our country. He may also have meant other political developments that block prejudice-free science. But I think it was about the elections.

SPIEGEL ONLINE: And why? Is it because the governing party's rank and file doesn't like the idea of a major cover story about evolution?

Atakuman: I assume so. But I find it extremely difficult to comprehend. I've been working together with Professor Cebeci since December 2008. Before that I didn't know him -- I was neither familiar with his scientific background nor his views. I don't know what his understanding of science is.

SPIEGEL ONLINE: Could it actually be the case that he is correct? Is the theory of evolution, in fact, a provocation in Turkey?

SPIEGEL ONLINE: Darwin isn't especially popular in Turkey. Only one in four believes in the theory of evolution. How do you explain that?

Atakuman: I see the causes in our system of education. Evolution isn't the only thing taught badly, if it is taught at all -- most things are badly taught.

SPIEGEL ONLINE: Do you think that scientific neutrality is in danger as a result of this incident?

Atakuman: That's not really what I want to believe, but in recent days, I have had concerns about whether we will still be able to work free of ideology in the future. Since Professor Cebeci took office, we have experienced several problems -- the naming of members of the editorial board, for example.

SPIEGEL ONLINE: Is the issue of Darwin now being hushed up?

Atakuman: No, I believe there will be other publications. This whole affair has created awareness of Darwin. Many people now want to get informed. There will also be many events in Turkey commemorating Darwin's 200th birthday.

Atakuman: Not personally, but I know from my European colleagues that they have all received a big, heavy book from him entitled "The Atlas of Creation." I also have a copy.

SPIEGEL ONLINE: It must be frustrating that Harun Yahya has distributed millions of copies of his book, whereas your cover story will not be appearing in Turkey's most famous science magazine.

Atakuman: This creation atlas is an impressive work -- very colourful, full of pictures. But intellectually, it impresses me less -- as little as creationism does.