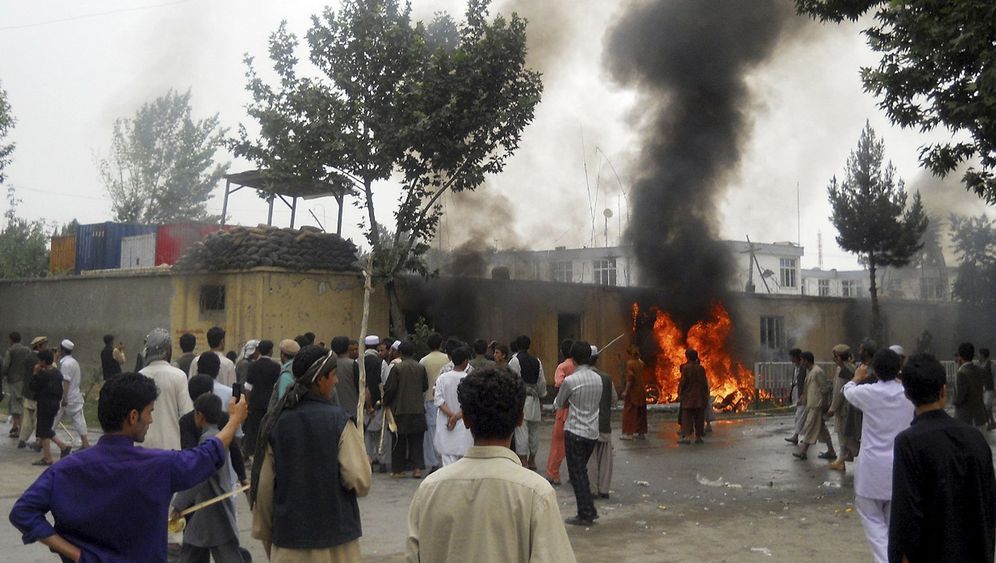 Germany's military, the Bundeswehr, has released new and explosive details about a violent altercation between demonstrators and German soldiers in northern Afghanistan on Wednesday that left 12 dead and dozens wounded, including two German soldiers. In a statement posted on its website Friday morning, the military contradicted its earlier claims and admitted that German soldier had deliberately fired upon the demonstrators. The Bundeswehr also said it was possible that the shots had been responsible for at least one death.

The incident occurred Wednesday morning in front of a German military camp in the northern Afghan city of Taloqan, in Takhar province, as a funeral march was being held for four people, including two women, who had been killed by US troops in a nighttime operation against suspected terrorists. The Bundeswehr had previously claimed that German soldiers had only fired warning shots to protect their camp from further attacks by enraged demonstrators taking part in the funeral procession.

The Bundeswehr claims that members of the funeral procession threw numerous hand grenades and Molotov cocktails toward the roughly 40 German soldiers in the small camp. The perimeter of the camp was being protected by Afghan guards belonging to a so-called "provisional advisory team" (PAT). After reportedly coming under heavy attacks, both the Afghan guards and Germans soldiers allegedly fired on the crowd in an effort to disperse it.

Until now, the Bundeswehr had denied any responsibility for the deaths of at least four demonstrators outside the camp's gates. On Wednesday evening, the Bundeswehr's website still said that the military had "no evidence" that attackers had been shot and killed by German soldiers. In several interviews, German Defense Minister Thomas de Maizière had previously only said that he wanted to wait for the results of an investigation before making any concrete statements on the events.

Hit in the Leg

Locals questioned about the incident have provided crucial new details about the sequence of events. They say that, after being fiercely attacked by the crowd, the soldiers were in a "self-defense situation." The soldiers then reportedly made "warnings, including ones with hand signals" and fired "warning shots into the air." However, they also say that, at a later point, the soldiers also fired "targeted shots aimed at the leg area of violent protesters," in the words of the Bundeswehr. "In three or perhaps four cases," the report states, there were "shots at violent attackers" targeting the "torso or the arms and hands." One attacker was apparently hit "in the neck-head region."

The new Bundeswehr statement suggests that German soldiers might have also been responsible for killing some of the protesters. According to experts, shots fired from modern firearms are almost always fatal when they hit the head, neck or chest. Doctors in the city claim that the protests, which raged in the central part of the city over the course of the entire day, left at least 12 dead and more than 80 wounded.

It seems unlikely that it will be possible to conduct forensic examinations to determine whether the Germans were responsible for any of the deaths. Islamic custom dictates that the bodies of the dead must be buried within 24 hours of death. Since the burials have already taken place, it is no longer possible to conduct an autopsy or other examination.

The emergence of these new details will have serious consequences for the soldiers involved in the clashes, who can expect to face an investigation. The Bundeswehr has already contacted federal German prosecutors and provided them with details about the incident.

International troops serving as part of ISAF, the NATO-led mission to Afghanistan, must conform with strict rules on the use of firearms, primarily aimed at avoiding civilian casualties during military operations. The organization currently has a team investigating the affair in Taloqan. Additionally, a group of senior Afghan investigators has also been in northern Afghanistan since Thursday trying to determine additional details about why the violence escalated.

Afghan President Hamid Karzai has gotten personally involved in the matter, but so far he has only criticized the deadly US military operation that triggered the protests. While American military sources claim that dangerous insurgents were killed in the raid, the Afghans say that the dead were civilians.

The high status of the officials now coming to Taloqan is enough to show just how seriously the incident is being taken. The police chief responsible for the northern part of Afghanistan, General Daud, who is known throughout the country, has traveled there to join in talks with regional leaders aimed at calming the situation. In the meantime, Brigadier General Zalmai Waisa, the commander of the 209th Corps of the Afghan Army, is working on developing a new plan for improving the defenses of the German camp.

It is still not clear whether the various teams of investigators will also look into the events that triggered the violent protests. The Afghans assume that the American troops killed four civilians when they conducted a commando raid near Taloqan on what they thought was a commander of the terrorist group Islamic Movement of Uzbekistan (IMU). But ISAF continues to believe that the two men and two women were insurgent fighters. It also claims that the four people were killed after brandishing weapons at the soldiers, who are presumed to be US special forces accompanied by US-trained Afghan soldiers.