When the helicopters started circling over the center of Bangkok last Wednesday at 6 a.m., I knew that the army would soon launch its attack. This was the moment that everyone had been fearfully expecting for weeks. I had always doubted that the government would actually allow things to go this far. There were many women and children in the district occupied by the protesters. Did the soldiers really want to risk a bloodbath?

A state of emergency had prevailed for the past six weeks in the Thai capital, with the royalist government of Prime Minister Abhisit Vejjajiva and the army on one side, and a broad coalition of anti-government protesters -- many originating from the poor provinces of northern Thailand -- on the other side. Approximately 70 people had died in street fighting and over 1,700 had been wounded. The pro-government Bangkok Post had called it "anarchy" and the opposition spoke of "civil war."

At 8 a.m. I arrived in the Red Zone, a three-square-kilometer (one-square-mile) area surrounding the Ratchaprasong business district, which the army had sealed off on all sides. On that day, as on previous occasions, it was relatively easy to slip into the encampment, which I had visited a number of times over the past few months. Behind barricades made of bamboo and car tires, the protesting Red Shirts had pitched their tents and built a stage. But the revolutionary party atmosphere that had always reigned here before had evaporated that morning.

People were stoically awaiting the soldiers. They knew that the military would attack from the south, via Silom Road, and the braver ones among them had ventured to as far as a kilometer (0.6 miles) from the front line. They stood there, but they weren't fighting. Some of them had slingshots, but nobody was firing.

A wall of fire made of burning tires separated the protesters from the army. Thick smoke choked the street, and as the soldiers slowly pressed forward, shots whipped through the streets. Snipers fired from high-rises and the advancing troops shot through the smoke. And we, a group of journalists, ducked for cover, pressing ourselves against a wall to avoid getting hit. Pick-ups with paramedics sped by to take away the wounded.

It was 9:30 a.m. when Italian photographer Fabio Polenghi joined us. Fabio had spent a lot of time in Bangkok over the last two years, and we had become friends during this time. Fabio, a good-natured dreamer, 48, from Milan had been a fashion photographer in London, Paris and Rio de Janeiro before coming to Bangkok to work as a photojournalist. We had traveled together to do a feature on Burma, and since then he had often worked for SPIEGEL. Over the past few weeks, the two of us had almost always been on the go together.

Just the previous evening, we had walked through the city together until darkness fell. We met on Din Daeng Street near the Victory Monument, which symbolizes Thailand's pride in expanding its territory 69 years ago. Now we stood in the midst of a devastated urban landscape, which revealed the country's slide into chaos. Dark smoke hung in the air; only the outlines of the obelisk were visible. The streets had been transformed into a war zone. A few days earlier I had crouched here behind a small wall for half an hour, seeking protection from the army's hail of bullets -- they had suddenly opened fire because some show-off had strutted around with a slingshot.

Not far from the Red Shirts' encampment stands Pathum Wanaram Temple, which was intended to serve as a safe zone for women and children during an attack. That evening we met Adun Chantawan, 42, an insurgent from the village of Pasana in the northeastern region of Isaan -- the rice-growing area where the rebellion against the government began.

Adun told us that he harvests sugarcane and rice there as a day laborer -- for €4 ($5) a day. He had been here in Bangkok since the beginning of the occupation two months ago. Abhisit's government must resign, he said, because it has not been elected by the people and is only supported by the military, which staged a coup to oust the former prime minister, Thaksin Shinawatra -- the hero of the poor. He wants Thaksin to return, said Adun, but more than anything else he wants a Thailand where the elite no longer have all the power and others also share in the wealth. Adun never thought that the government would so brutally crack down on its own people. He told us that he was prepared to fight to the death for his ideals.

Dreams of Living in a More Democratic Society

Adun Chantawan was a typical Red Shirt supporter, but far from all of them came from the poor northern provinces. There were also bankers from Bangkok among them, who joined the insurgents in the evenings after work, and young rowdies, too. For most of them, it was not primarily about Thaksin. They were mostly concerned with the social injustice in the country. Many of them dreamt of living in a more democratic society. I could never understand the government's claims that the Red Shirts had been bought by Thaksin. Nobody allows themselves to be shot for a handful of baht.

When we looked for Adun the next day, he was nowhere to be found. Chaos was everywhere. Fabio and I saw the smoke, and the soldiers behind it, advancing towards us -- and we heard an increasing number of shots. Snipers from a side street were targeting us.

The onslaught had begun. I didn't dare go any farther, but Fabio ran forward, across the street, where shots were regularly fired -- a distance of roughly 50 meters (160 ft.) -- and sought shelter in a deserted Red Cross tent. This marked the beginning of the no man's land between us and the advancing troops. I saw his light blue helmet marked "press" bob into view. He waved for me to come join him, but it was too dangerous for me up there.

Since the beginning of the conflict, I have experienced the Thai army as an amateurish force. If they had cleared the street protests at the outset, the conflict would have never escalated to this extent. Once the soldiers attempted to clear the demonstrators, they left a trail of casualties. They fired live ammunition at Red Shirts who were barely armed.

I observed absurd, unequal battles during those days. Young people crouched behind sand bags and fired on the soldiers with homemade fireworks and slingshots. The soldiers returned fire with pump guns, sniper rifles and M-16 assault rifles.

At their camp, the Red Shirts had displayed photos on a wall of corpses with shots to the head -- they wanted to prove that snipers in high-rises had purposely liquidated demonstrators. These included Maj. Gen. Khattiya Sawasdipol, a renegade officer and one of the most radical leaders of the anti-government protesters, who had been shot in the head six days earlier, and died shortly thereafter.

The government maintains that it has nothing to do with liquidations, and that the demonstrators are shooting each other dead. That isn't true. Over the past two years, during which I reported on the Red Shirts, I have almost never seen a firearm -- with the exception of the occasional revolver in the hand of a bodyguard.

On that morning, the first soldiers broke through the wall of smoke. From where I was standing, it was barely possible to make them out, but you could hear bullets whistling through the air. They were fired by the snipers, who were working their way forward, from building to building. Some of them appeared to be directly above us. Fabrio was nowhere to be seen.

They Had Shot an Italian

I headed towards Pathum Wanaram Temple, a few hundred meters to the west, in the Red Zone. The occupying protesters had lost, that much was clear -- they hadn't even fought back. It was 11:46 a.m., and they were playing the national anthem. Women and children were fleeing to the temple courtyard to escape the approaching troops. One of the protesters' leaders, Sean Boonpracong, was still sitting in the main tent of the Red Shirts. He said that he intended to carry on with the resistance, even after the army's attack. Instead of allowing himself to be arrested, he planned to go into hiding.

At 11:53 a.m. I tried to reach Fabio by phone. His voicemail clicked in, which wasn't unusual. You could only occasionally get a signal. Across from the temple, in front of the police hospital, a number of journalists were waiting for the paramedics to arrive with the wounded. A nurse noted the admissions on a board. It was 12:07 p.m., and she had already written down 14 names. A foreign reporter stood next to me. He said that they had shot an Italian. Right in the heart. Over one and a half hours ago. He said that he had taken his picture. He even knew his name: Fabio Polenghi.

Columns of smoke billowed up over the city that afternoon. The retreating Red Shirts set fire to everything: the huge Central World shopping center, the stock exchange and an Imax movie theater. People looted supermarkets and ATMs. When I finally returned home, piles of tires were burning on the street.

On the evening of the day that the government set out to restore order, Bangkok was an apocalyptic place. And Fabio, my friend, was dead. 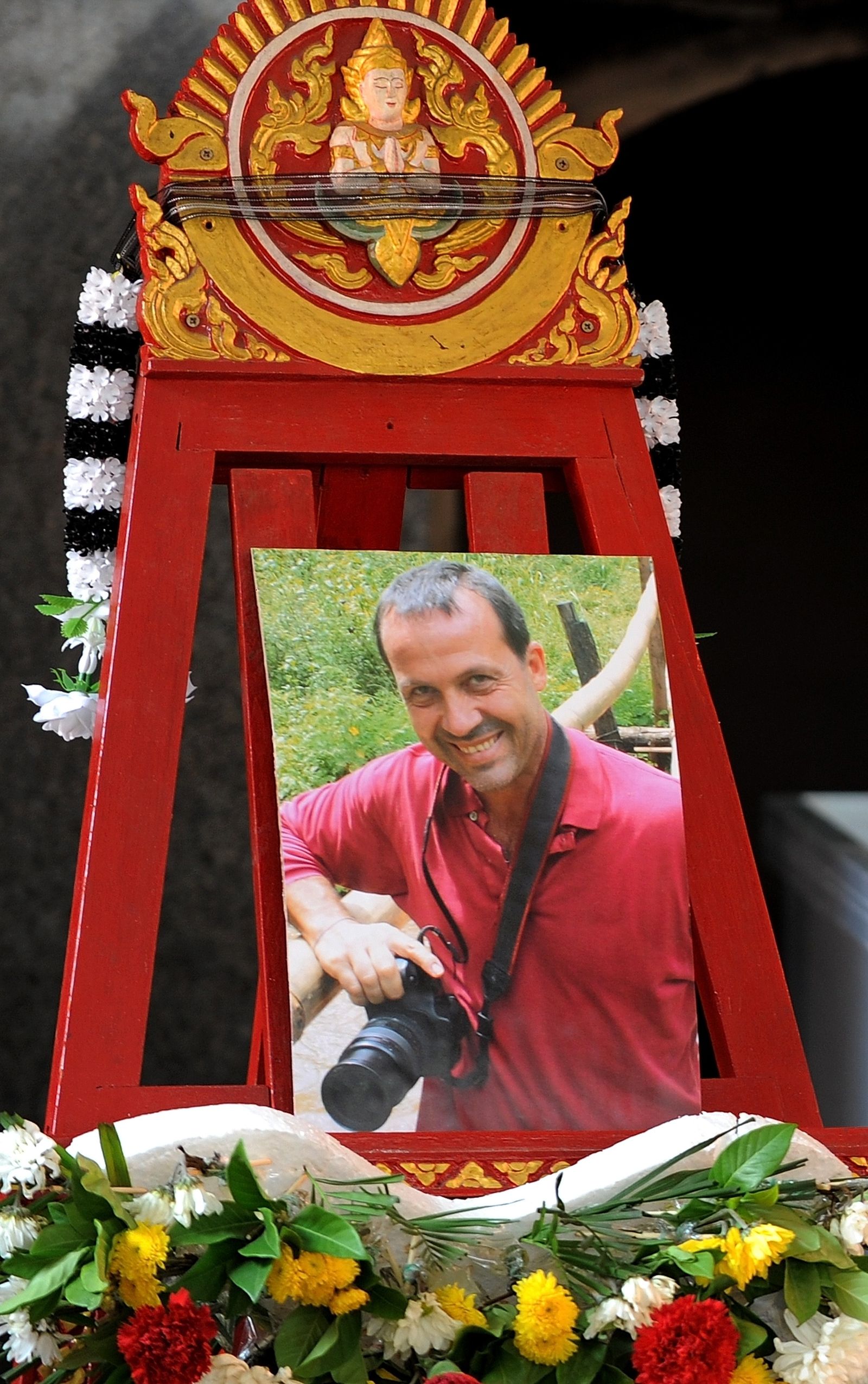 A potrait of slain Italian photograher Fabio Polenghi is displayed at his funeral in Bangkok.