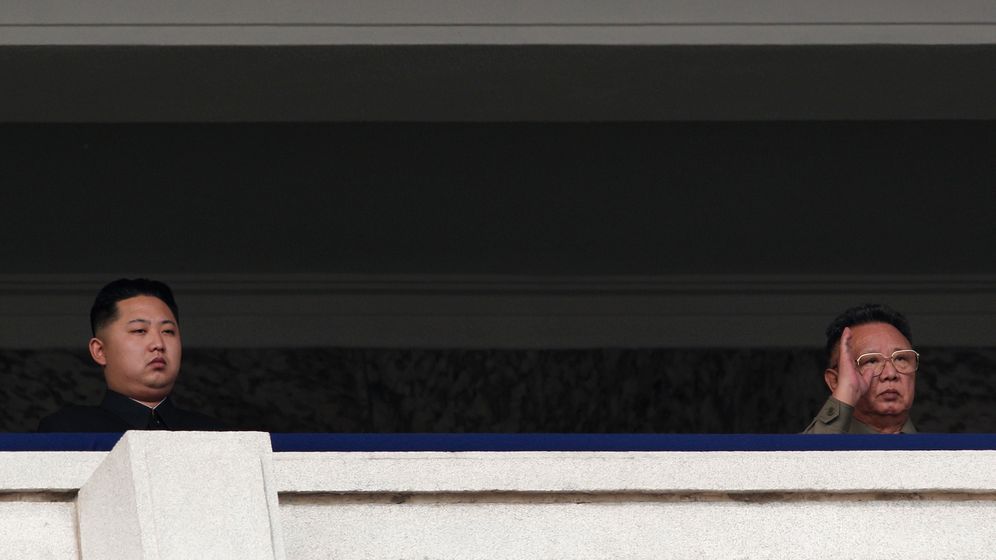 The death of North Korean leader Kim Jong Il on Saturday has propelled the region into deep uncertainty. The "Dear Leader" died of a heart attack during a train ride, state television reported early on Monday morning. The big question now is: Who will succeed the late ruler?

The official news agency KCNA sent a clear signal on Monday, naming the North Korean ruler's son Kim Jong Un as "the Great Successor." It wrote that "Kim Jong Un is now at the head of the Korean revolution."

Kim Jong Un topped the list of officials who will lead the funeral, seen as a big hint as to who will take the reins of the state. KCNA said the funeral will take place in Pyongyang on Dec. 28, with the mourning period lasting until Dec. 29.

"We will prevail in our revolution today and tomorrow, because we have comrade Kim Jong Un," KCNA quoted a resident of Pyongyang as saying.

Little is known about the leader's youngest son. His mother, Kim Jong Il's third wife, was a dancer who was born in Japan. She died of cancer in 2004. Jong Un is probably 29 years old and studied in Bern, Switzerland under a false name from 1998 to 2000. After class, he was reportedly always whisked away into the custody of the North Korean embassy.

Back in North Korea, his father sent him to a military academy between 2002 and 2007, where he was allegedly trained as an artilleryman. He is later said to have worked in the "Leadership Section" of the party which manages all senior members' files. Some North Korean experts suspect he spent a brief stint working for the intelligence service. He has been general of the North Korean army for a year and is a member of the powerful National Defense Commission.

Now he will continue the family dynasty, but no one knows what he and his entourage stand for or what his leadership will mean for the hermit state. Jong Un has no foreign policy experience, but may have spent some time in China. His father reportedly introduced him to the Beijing leadership.

Will Kim the third seek reconciliation with South Korea or blackmail the world with nuclear bombs? Will he start opening his closed country, à la Gorbachev, or continue to run the planned economy with a grotesque personality cult, following in the footsteps of his father and grandfather Kim Il Sung?

Kim Jong Il's former Japanese chef Kenji Fujimoto wrote in his memoir that the leader-to-be is both ambitious and tough. He also resembles his father in appearance, shape and personality, he wrote.

A year before his death, the elder Kim tried to get his house in order by placing relatives and confidantes in key positions in the party and the army. Kim wanted to ensure that the powerful army rallies behind his son, thus safeguarding his family's grip on power, at least for now. Kim's sister Kim Kyong Hui, 65, formerly responsible for light industry, became the first woman to rise to the rank of four-star general and join the Politburo.

The Purity of Korean People

Other relatives and comrades will also act as mentors for the young man: Kyong Hui's husband Chang Sung Taek is expected to advise the new leader. Korean refugees have described Chang, a senior member of the National Defense Commission, as "number two" in the party.

Family members will also pull strings behind the scenes. The deceased leader's fourth wife and a daughter from his first marriage will both likely exert influence. Meanwhile, one of his confidants has been recently appointed Vice-Marshal.

Kim's clan has operated a strict planned economy and forged a unique ideology, which hinges on quasi-religious notions of the purity of the Korean people rather than Marxism. In North Korea, a holy family prevails over a childlike people, protecting it from dangerous outside influences.

They derive their legitimacy from Kim's family history. The ascendant leader's grandfather Kim Il Sung founded the "Democratic People's Republic of Korea" with Stalin's help in 1948. Since then the family has adorned their dictatorship with legends and mysteries: the country's fate is closely linked to the holy mountain of Mount Baekdu, seen as the crib of their ancestry. Koreans' survival allegedly hinges on the continuation of the revolutionary family's bloodline, a belief which is taught to North Korean children in kindergarten.

During a battle against the Japanese in 1942, Kim Jong Il reportedly saw the light of the world in a guerrilla camp on Mount Baekdu. The legend goes that he saw a double rainbow in the sky. Kim Jong Il, who began his rule in 1994, is still seen as the "Eternal President," ruling his subjects from beyond the grave. It remains to be seen how his legacy will be steered into the future.