On April 29, his execution was scheduled for 8 p.m. Two hours earlier, at 6 p.m., his cellmate Clayton Lockett was scheduled to die in the Oklahoma death chamber. But during his execution, anything that could possibly go wrong did. Lockett woke up again and again, despite the fact that a doctor had confirmed he was unconscious. Then the IV line exploded, resulting in blood spilling all over the chamber. It took another 43 minutes before he was pronounced dead. It was the cruelest execution in the history of lethal injection.

The execution of Charles Warner was subsequently canceled and rescheduled for November. But this was also postponed at the last minute. In the meantime, Oklahoma invested $100,000 in the rennovation of its death chamber but needed more time to teach its obviously incompetent staff how to kill people more professionally.

But the staff isn't the only problem: Until recently, most states first administered a reliable dose of anesthesia in order to render the inmate completely unconscious. According to protocol, the inmate would then receive the second and third injections that would paralyze and kill him. Without adequate anesthesia, the second and third drugs would subject the inmate to excruciating pain. Since the manufacturers of previously used anesthetics have banned their use in executions, the authorities are experimenting with new drugs such as Midazolam.

Midazolam was used for Lockett's execution and others in which prisoners remained conscious for a long period and clearly suffered. There are serious doubts about whether Midazolam serves its purpose -- and with good reason, too, given that the US Food and Drug Administration hasn't even approved the drug for use in surgery.

Charles Warner and three other death row inmates filed a lawsuit against the use of Midazolam. When he woke up on Jan. 15, he hoped that, once again, his execution, scheduled for 6 p.m. that evening, would be postponed. His hope was that the US Supreme Court would agree to hear his case and that his execution would be postponed until there was a judgement.

At noon on that day, he ate his last meal again and said goodbye to his family. When the time came for him to be strapped onto the gurney, nothing happened. Warner learned that the Supreme Court justices in Washington were still deliberating on his fate. Once again, he was hopeful; 10 minutes passed, 20. Finally, they came for Warner. The Supreme Court had rejected the request in a 5 to 4 vote, the narrowest possible margin. The five judges who voted against him were nominated by Republicans, the four who were for it were Democrats. An hour later, Warner was dead.

A Gross Violation of Human Rights

What Warner was put through on multiple occassions was psychological torture. And this is not unusual: Courts will often decide literally at the last minute whether or not to grant a stay. In addition to the execution, this mental torture itself could be considered a gross violation of human rights. The act of executing a human being is already the highest form of torture, but the mental anguish of this back and forth would be a gross violation of human rights in itself.

Warner's case is made even more absurd by the fact that one week after his execution, the Supreme Court decided to accept his case and now plans to issue a judgement in June as to whether the use of Mizadolam is constitutional.

And it gets even more absurd. One of the three remaining petitioners was scheduled to be executed in Oklahoma tonight: Richard Glossip, who, according to a great deal of evidence, may be completely innocent and was accused by someone who might have been trying to avoid death row himself. Following the Supreme Court's announcement to review the use of Mizadolam later this year, even Oklahoma's attorney general called for the suspension of Glossip's execution until then. Nevertheless, Glossip had to wait in fear again until the night before his scheduled death. On Wednesday night, the Supreme Court finally granted the requested stay.

This tug of war over life and death would have looked disturbing even in the Middle Ages. In 2015, however, it is a farce -- and unworthy of a democratic state. After all, we are not talking about Saudi Arabia here, but the leader of the Western world. There are educated individuals working tirelessly to ensure their country's future right to execute its citizens with ineffective substances.

The great promise of lethal injection, supposedly, was to make the killing more humane, but this has proven to be a great illusion. The taking of human life is always an act of violence, no matter how "humanely" it is done. A state should never sink to the level of those it seeks to punish.

Still, the accumulation of errors, attrocities and absurdities often results in change. The events of the past few months are a sign that a broken system is on its last legs. People will continue to be executed in the US. But sooner or later the American people will not be able to deny the lunacy of this system. Those who love the United States must carry this hope. 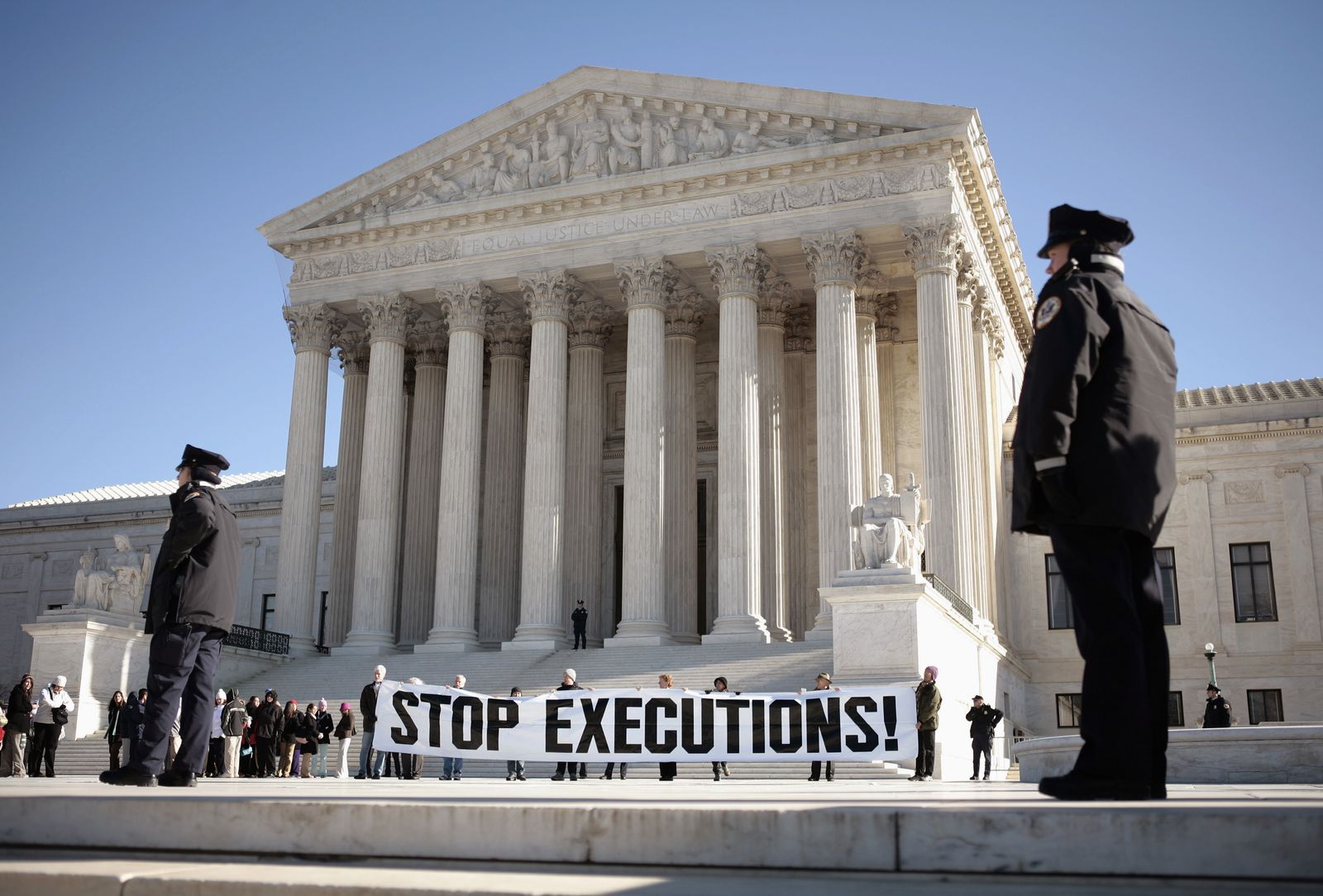 A protest against capital punishment in front of the Supreme Court building in Washington DC: The taking of human life is always an act of violence.