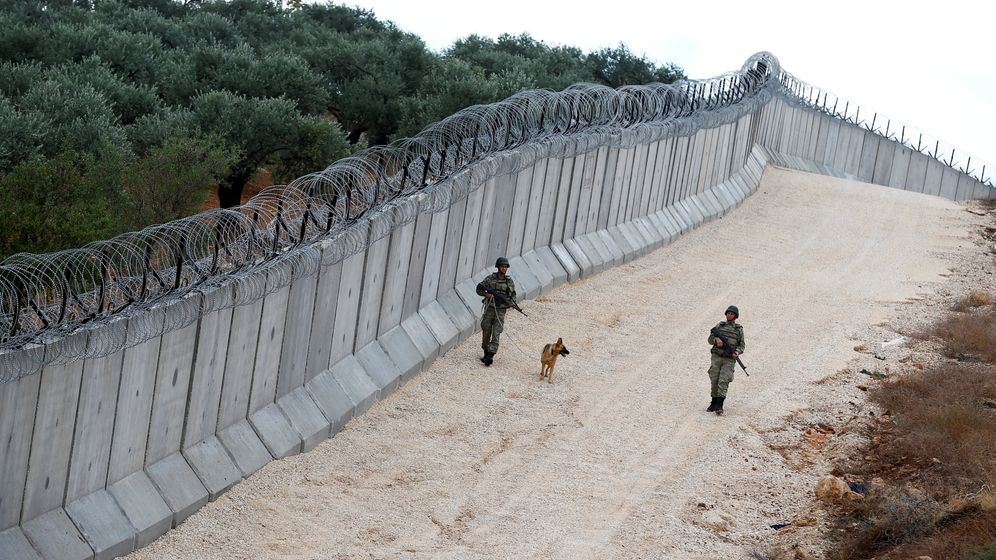 Bashar Mustafa, 14, was guiding a family from Aleppo through the Syrian-Turkish border area and was still a few hundred meters from the frontier when he heard Turkish soldiers yelling through their loudspeakers: "Stop!"

Bashar suddenly heard the clatter of machine-gun fire and threw himself to the ground. He saw his cousin Ali, 15, lying motionless in the dust a few meters away with blood running down his face. He had been hit in the head with a bullet and Bashar wanted to rush over to help him, but the soldiers continued firing. He was forced to spend the next several hours hiding among the thorny bushes and only when the border guards stopped firing the next morning was he able to recover his cousin's body.

Bashar is sitting in the shade of an olive tree in the fields of northern Syria recently and relating the story of his dramatic experience, which took place in early summer 2016. He has short, black hair and is wearing an old polo shirt. He has tears in his eyes as he tells the story of what happened to him and Ali. It is the kind of thing that has been happening to people at the Syrian-Turkish border almost every day the past several months.

In its fifth year, the war in Syria has reached a new level of brutality. With the help of Russia and Iran, dictator Bashar Assad has intensified his bombing attacks on Syria's civilian population and his regime is about to take control over what is left of Aleppo. Thousands of people have fled the city in the past several days, but the paths to neighboring countries are largely blocked. France's ambassador to the United Nations even warned recently of "one of the biggest massacres of civilian population since World War II."

Turkey, which has taken in almost 3 million Syrian refugees in recent years, has sealed off its borders in the wake of the spring 2016 refugee deal with the European Union. Syrians who seek to enter Turkey via airplane or ship from a third country, such as Lebanon or Jordan, require a visa, but officials only rarely issue them. And the overland route is blocked.

The German government claims that the Turkey deal stemmed the refugee crisis. In truth, though, the crisis has just been diverted. The wall on the German border that Chancellor Angela Merkel wanted to avoid at all costs has been erected instead by Turkish President Recep Tayyip Erdogan on his country's border with Syria: A three-meter (nearly 10 feet) tall cement barricade that extends for hundreds of kilometers and prevents refugees from entering the country. People may no longer be drowning in the Aegean Sea, where the number of boats embarking from the Turkish coast to the Greek islands dropped significantly as a result of the deal. Instead they are dying at the Turkish-Syrian border.

In the past several months, SPIEGEL ONLINE has spoken with several people in Syria and Turkey who witnessed Turkish border guards shooting at people seeking protection while Human Rights Watch documented seven similar cases in May. The Syrian-Turkish border has been transformed into a death strip.

Bashar Mustafa and his cousin Ali grew up in al-Duriya, a Syrian village on the Turkish border. Ali was the oldest of five children and provided for the family, harvesting olives in the fields of northern Syria, after his father was seized by Assad's henchmen. Sometimes, he and Bashar managed to earn a bit of extra money by guiding fleeing Syrians into Turkey -- which is what they were doing on that August night when Turkish soldiers opened fire. "We know that the Turks are extremely stringent at the border," says Bashar. "But what are we supposed to live from?"

Aid organizations estimate that half a million Syrians are currently holding out in the border region and hoping to be able to flee into Turkey. The camps at the border are overcrowded, women and children are sleeping in the bushes and food is in short supply.

One in a Thousand

Since Turkey sealed the border, a smuggling industry has developed in northern Syria. Until the beginning of this year, migrant smugglers would take people across the border into Turkey for less than 100 euros. Now, it costs 1,000 euros to get into Turkey -- and most attempts fail. Out of 1,000 attempts, estimates a commander of the Free Syrian Army (FSA) who is stationed in northern Syria, only one gets through at the most.

The rebel leader is connected to FSA fighters, activists, smugglers and paramedics via WhatsApp and regularly receives information about Syrians who have been injured or killed while trying to flee. Turkish soldiers, he says, now shoot at every migrant who even comes close to the border. The Turkish army, meanwhile, denies the accusations and says it only fires "warning shots."

Those who do manage to get across the border are in danger of being apprehended by Turkish security personnel and there have been reports of abuse in custody. An engineering student from Deir ez-Zor in eastern Syria says that he was locked into a military barracks near the Turkish border city of Reyhanli for two days and was given nothing to eat or drink. He says the Turkish soldiers beat him, stole his valuables and then put him on a bus full of other refugees back across the border into Syria.

Such accusations don't exactly conform to Erdogan's officially announced "open door" policy. The wall on the Syrian border, he says, is to protect Turkey from terrorism and not to prevent refugees from crossing the border. Islamic State (IS) fighters have perpetrated several attacks in Turkey in recent months, with 55 people dying in one such assault on a wedding in late August in southeastern Turkey. Shortly thereafter, the Turkish army marched into Syria to clear IS and Kurdish militias out of the border region. Erdogan has long wanted to establish a "safe zone" in northern Syria and has said that refugees could find shelter there too.

'Who Cares About Us?'

Erdogan long enjoyed his role as protector of the Muslims from Syria, says Metin Corabatir, head of the Ankara-based Research Center on Asylum and Migration (IGAM). Lately, though, tensions between Syrian migrants and people in Turkey have been on the rise and unemployment is at its highest level in seven years. "Erdogan has no interest in allowing more refugees into the country," Corabatir says.

Europe, meanwhile, tolerates the human rights violations being committed on the Syrian-Turkish border. Neither the German government nor the European Commission has made an attempt to learn more about the shots being fired there. Chancellor Merkel is relying on Erdogan to keep the refugees away from Europe, no matter how he does it.

Bashar Mustafa is accompanying his Aunt Mariam to Ali's grave on a hillside above the village. The two kneel before a chunk of stone that has been decorated with shrubbery and Mariam Mustafa buries her face in her hands. She says she doesn't know how to carry on, how to feed the family. She says she wants to hold Ali's murderer to account, but there is nobody to turn to. She shakes her head. "Who cares about us?"