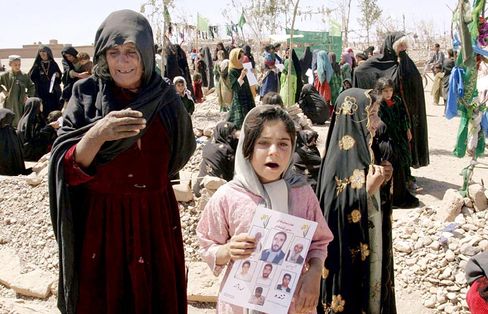 Afghan citizens have frequently been the unintended victims of US military actions in their country.

The wedding ceremony was winding down. The bride said goodbye to her family in the small village of Wech Baghtu in Afghanistan's troubled southern Kandahar Province. It was Monday, Nov. 3.

And then, all of a sudden -- as one of the wedding guests recalls -- an unknown man began shooting at a group of foreign soldiers posted near the village. The soldiers returned fire and called in air support. Helicopters and fighter planes arrived a short time later and began firing on the village.

Ten hours later, at least 36 village residents were dead, including women and children. Many Afghans were injured. Among them was the bride.

Afghan President Hamid Karzai was outraged, as he has been after many such incidents in the past. The fight against terrorism, he said, "cannot be fought in our villages," and he demanded that the coalition troops do more to avoid civilian casualties. A few weeks earlier, US Defense Secretary Robert Gates had promised the Afghan leader just that when he ensured Karzai that he would instruct his commanders and pilots to exercise greater caution in pinpointing their targets.

There have been times when artillary shells have killed innocent civilians after landing several kilometers off-target. That is what happened in Paktika Province in the country's southeast on July 19. In other instances, such as that of last Monday -- as well as on July 6 and other previous occasions -- wedding parties have been misidentified as groups of insurgents -- with deadly consequences.

Following such attacks on innocent civilians, the generals routinely promise to improve the situation. But, in the war in Afghanistan, the number of civilian casualties continues to rise.

According to figures compiled by the United Nations Assistance Mission in Afghanistan (UNAMA), between January and August of this year, 1,445 civilians were killed in the country, which represents 405 more deaths than occurred in the same period last year. The majority -- or 800 -- of the deaths can be blamed on the Taliban and other insurgents. Targeted suicide-bombing attacks on the population, for example, are part of their barbaric way of waging war.

The rest were victims of Afghan government troops or the international coalition forces. This does not exactly make these soldiers more popular among the people they are in Afghanistan to protect. Their allies are also becoming increasingly frustrated. "The trust we build," says a German soldier serving as part of a NATO deployment, "is often destroyed by the Americans and their air strikes." All too often, the pilots of American high-tech aircraft are not even capable of distinguishing between a band of armed Taliban and a group of civilians at a small-town ceremony.

Sites of some recent places in Afghanistan where there have been reports of civilian casualties from US military strikes.

According to US General David McKiernan, the commander of the International Security Assistance Force in Afghanistan, the blame for this predicament lies in the paucity of soldiers. Having insufficient numbers, he says, repeatedly forces ground troops to request air support, which in turn increases the risk of civilian casualties.

An internal investigation, written by Michael W. Callan, a brigadier general in the US Air Force, reveals the deadly consequences of the American approach to waging war. Callan writes, for example, about an "air strike" on the village of Azizabad in Shindand District in Herat Province, in the country's far west, the night of Aug. 21, 2008.

According to reports from survivors, Afghan officials, human rights organizations and the UN mission in Afghanistan, about 90 civilians were killed in the attack, including 60 children and 15 women. At first, the US military denied that there had been any civilian casualties. At a later point, it admitted that an "estimated two women and four children" had been killed in the attack.

Whose Numbers Do You Trust?

The six-page report that General Callan presented to his superiors at the United States Central Command, the regional command unit in Florida responsible for the Afghanistan effort, arrives at a similar conclusion. The claims that "US or Afghan forces killed an estimated 90 civilians" -- thereby violating the laws of war -- "are unfounded," Callan writes.

But then, under "Item 6.a.," the general laconically adds his own conclusion, which differs significantly from the official account. According to Callan, an "estimated 55 people were killed (22 anti-coalition fighters and 33 civilians)" in Azizabad.

The attack was prompted, Callan writes, by "credible information" that 20-30 enemy fighters under the command of a notorious Taliban leader were planning to convene in Azizabad. On the strength of this information, ground troops were sent to Azizabad with orders to "capture/kill" a so-called "High Value Individual." The troops were supported by an AC-130G aircraft outfitted with artillery.

"Unfortunately, and unbeknownst to the US and Afghan forces, the anti-coalition fighters chose to position themselves in the immediate proximity of civilians," Callan writes in his report. 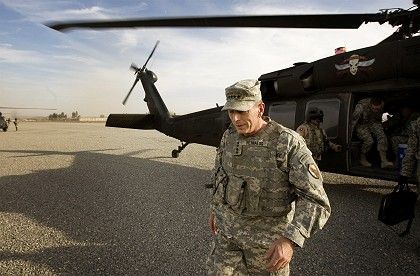 General David Petraeus walks away from a helicopter in Afghanistan. He now heads the US Central Command, which oversees US forces in both Iraq and Afghanistan.

Using the sober, fastidious language of the military, the Air Force general proceeds to examine the horrific details of the incident. Callan notes that he questioned 28 people, analyzed 236 documents and viewed 11 videos. Nevertheless, he writes, he could not answer some questions, such as how many women and children were killed. Of the 33 "civilians presumably killed in the fighting," only "eight men, three women and 12 children could be identified."

The general characterizes the investigations of the Azizabad bombardment by local authorities, various human rights organizations and a UN envoy as "dubious," noting that they were undoubtedly colored by "financial, political and survival-oriented" motives. According to Callan, the official lists of the dead could also be described as "invalid." He notes that these lists lacked an exact foundation because Afghanistan has no birth registry, no current census and no official death certificates.

This lack of records might have been the reason why US forces did not compensate the surviving family members for their "pain and suffering." That they left up to the Afghan government, which insisted on using its own figures. According to the US report, the Afghan government paid "$2,000 to the family of each of the supposed 90 dead civilians."

The injured were paid $1,000 each and given the chance to undertake the Islamic pilgrimage to Mecca, or Hajj. For this purpose, say government officials, the minister of pilgrimages and Islamic affairs distributed 9,300,000 Afghani -- or about €140,000 ($175,000) -- to the village elders.

In the end, Callan concludes that civilians were killed, but no laws were broken. The armed attack was "an act of self-defense, necessary and appropriate," based on the information available at the time to the officer in charge.

While conducting his investigation, the general apparently neglected to interview tribal leader Tor Jan Noorzai. The dignified elderly man, who assisted in the burial of the victims in Azizabad, later told reporters exactly the same thing that the provincial police chief and officials at the Interior Ministry in Kabul had claimed: At the time of the air attacks, there were no Taliban in Azizabad.

On the contrary, Noorzai explained, the gathering -- which the Americans supposedly learned about from a good source -- was a memorial service for a Taliban opponent who had been murdered the previous year.