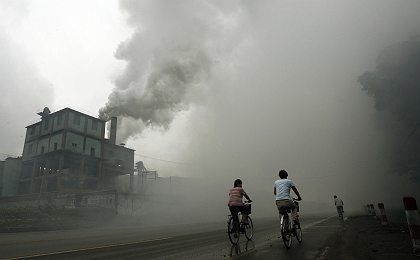 Cyclists pass through thick pollution from a factory in Yutian in China's northwest Hebei province. The Chinese government has forced the World Bank to remove embarrassing information about pollution deaths from a report, according to the Financial Times.

Every government would sometimes prefer to sweep certain embarrassing information under the carpet. Fortunately this is hard to do when international organizations like the World Bank are involved. Except, it appears, if the government in question is China's.

According to a report in Tuesday's edition of the Financial Times, the Chinese government put pressure on the World Bank to take potentially damaging statistics out of a report on pollution in China.

Among the alleged cuts made were the report's finding that around 750,000 people in China are dying prematurely every year due to high levels of air pollution and poor water quality. Another deletion was a particularly damning map of China showing which parts of the country suffered from the most pollution-related deaths.

The report, titled "The Cost of Pollution in China," has not yet been officially published but a version which had been given at a conference in Beijing in March was available on the Internet.

The World Bank reacted to the newspaper story by saying Tuesday that the report had not been finalized. "This is a joint research project with the government and the findings on the economic costs of pollution are still under review," the bank's Beijing office said in a statement. "The final report, due out soon, will be a series of papers arising from all the research on the issue."

The Financial Times was scathing of the Chinese government's behavior in an editorial published in its Wednesday edition. "Even in a China that is more capitalist than ever, the instinctive official response to bad news is to suppress it with all the force available to the nominally communist state," the newspaper wrote.

"Beijing needs to accept that in 2007 this kind of reaction is as futile and dangerous as it was in 2003, when the authorities kept secret the spread of the deadly SARS virus. It is futile because the truth will out and dangerous because secrecy delays the necessary remedial action."